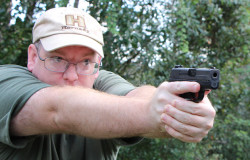 Support for new gun control laws is at an all-time low according to a Gallup poll published April 8, 2009.

Down from an all-time high of 60% recorded in 1959, only 29% of the surveyed adults believed that citizens should be banned from owning and possessing handguns.Â  Additionally, 69% of those surveyed outright oppose any ban on handguns.

Also discovered in the survey was that only 49% of surveyed adults want to increase restrictions on the sale of firearms.Â  This is also an all-time low.

I think this survey points to two things.Â  First, I believe it shows we are getting the message out.Â  What message?Â  The fact that the media and politicians have, in many cases, lied about firearms and their relationship to crime for their own political agenda.Â  The facts about self-defense and self-reliance.Â  The facts about the origins of the Second Amendment.

Secondly, I strongly believe the survey shows we still have a lot of work to do.Â  Almost half of the populace thinks that more restrictions on sales are needed. I believe this shows that they do not understand the process, paperwork, and background checks already done with every firearm purchase made through a dealer in this country.

So, take heart: we are making progress!Â  We still have more work to do, though.Â  So make plans to take a friend or relative out shooting this month.Â  Put a gun in their hands, teach them how to safely handle it, and then let them make that joyous sound of liberty we all love so much.

We make progress when it comes to combating gun control and the other anti-freedom forces. Â We cannot rest, though, in this defense of our liberties. Â Keeping people free is a very fragile thing. Â Should the federal government ever be overrun with corruption, the loss of liberty will be a nearly sure thing. Â We must stay in charge of our elected representatives.