Taurus introduced the first polymer Judge at the 2010 SHOT Show.Â  Called the “Public Defender Polymer,” this Taurus Judge features a frame entirely made of polymer with a stainless steel cylinder and barrel insert. Â This follows the trend started by Ruger last year with the polymer LCR revolver.

Holding the polymer Judge, I was impressed by how light it felt.Â  Weighing 27 ounces, the Public Defender Polymer is clearly much lighter than the other models of Judge revolvers.Â  The handgun was well balanced, and a red fiber optic front sight was very easy to acquire. 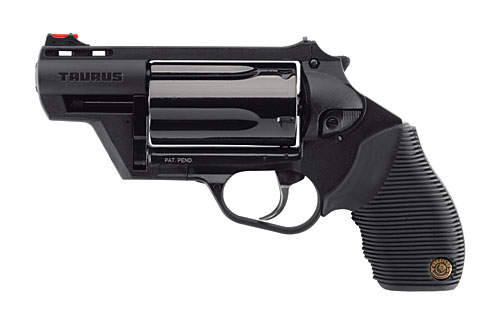 The Taurus Public Defender Polymer is still being sold by the company. Â The production guns are very similar to the models shown at the SHOT Show. Â Sometimes the guns shown will vary significantly from the guns that are actually manufactured. Â With these, the guns are extremely similar.

If you like the Taurus Judge line of handguns for self-defense (or just plain old fun shooting), you will probably like this variation. Â It is not likely to be as much fun to shoot as the larger framed guns (due to the much lighter weight and shorter barrels), but it is probably a lot easier to carry and to conceal on one’s person.

I FOUND SEVERAL HOLSTERS, HARD PLASTIC AND LEATHER, MADE FOR THIS WEAPON;. JUST GOOGLE THE GUN AND ADD THE WORD HOLSTER AND YOU WILL FIND ONE YOU LIKE.

i got one for Christmas. i was ready for a kick the first time i fired it. the kick never came. a 9mm kicks harder than the .45lc or the 00 buck .410. light easy to handle. good trigger pull when using Double action. i would love it even if my sons had not bought it for me.