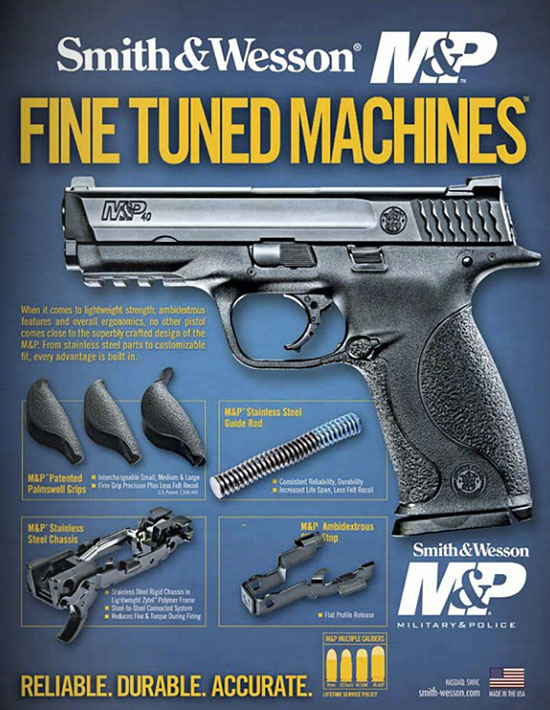 Smith & Wesson is launching a new offensive in an effort to expand the M&P pistol line’s market share according to recently released documents. Â New advertising and new guns are a significant part of the company’s new marketing push.

An example of the increased advertising in shown on the right. Â This is a S&W ad from the current issue of American Cop magazine. Â The full page advertisement highlights many of the features that both individual shooters and law enforcement agencies would be interested in.

Additionally, according to the presentation, Smith & Wesson will increase support of their dealers with “strong merchandising materials,” training for armorers and something they call the “On-The-Hip Program.”

In the PowerPoint, Smith & Wesson indicates that there are “new and exciting entries for [the] polymer pistol category,” including new guns for concealed carry and pistols for the “consumer and professional.”

S&W also indicated that they would expand the M&P rifle line with “additional calibers and models.” Â I wonder if we will see a .308 M&P precision rifle?

Smith & Wesson released a new pistol for concealed carry and/or back up duties called the Shield. Â This new handgun is chambered in 9mm and .40 S&W, and maintains many of the features that M&P owners like. Â The Shield has been extremely popular with citizens and law enforcement officers alike.

Also, Smith & Wesson introduced the M&P10, an AR-10 style rifle chambered for the 7.62 NATO/.308 Win round. Â This rifle is selling every bit as well as any of the other popular rifles the company introduced in recent years.

As I reported in February, Smith & Wesson is making a concentrated effort to push the M&P line of pistols. Â The latest, two-page ad in American Handgunner is an example of their increased marketing: 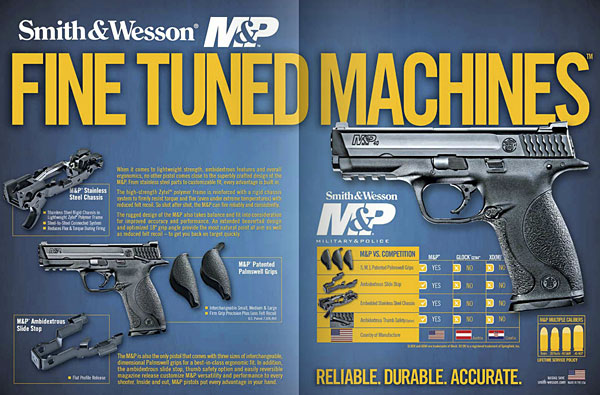 Personally, I like the M&P line and own one of the full-sized 9mm pistols. Â A compact 9mm is on my short list of “guns to buy.”

Smith & Wesson suffered a number of huge setbacks including an ill-conceivedÂ agreement with the government (old owners) and a failure to evolve with the industry (losing huge market share to Glock). Â Many wondered if the company was in a spiral toward oblivion.

In recent years, it appears S&W has gotten its mojo back. Â The success of the M&P line hasn’t stopped with pistols. Â The M&P15 line of rifles has proved to be very popular with the buying public and law enforcement agencies. Â Additionally, guns like the Bodyguard series and even the Sigma (can you believe it?) have been selling very well for the company.

I don’t know about you, but I am looking forward to seeing what the new Smith & Wesson Shield is going to be.

I’m totally in love with my M&P 40. Part of me is considering dumping my Glock 20 as my carry piece and picking up another M&P to take its place as that would also provide me a backup pistol for competition.

Should S&W make an M&P in 10mm, I would hurt myself running to the gun store to buy one.

I can see it now:

The new Smith & Wesson L&G Model (Lizards and Geckos) chambered in 10mm. It comes with a bonus concealment holster that allows the owner to carry it on their hip without pants.

It will be a sure hit at the NRA convention!

I just hope there is a mid-sized 9 in the works!

Agreed. I liked your mock up: http://www.balloongoesup.com/blog/2012/01/a-mid-sized-smith-wesson-mp9/

I’d settle for an M&P that has a fiber front sight, a trigger that does not have to be replaced (every one I’ve fired has an absolutely horrible trigger), is not pink (do not want bright colors on a carry gun) and you can actually FIND. The M&P Pro in 9mm may fit the bill (having never fired one, I do not know if the trigger is even halfway decent, which would be a marked improvement), if you can find one. Good luck.

I heard the first generation M&P pistols had a “fishy” trigger. Due to so many complaints, on an otherwise outstanding pistol, the S&W guys worked up some tougher pins. I don’t own one (wish I did), but I’ve heard the trigger problems is mostly solved now.