“What kind of 300 AAC Blackout ammo is there? Â Is this just a flash in the pan, or are there serious loads out there for this cartridge?”

I get a lot of questions from people – in the “real” world and via the internet. Â I figured I would start answering some of those questions as posts so as to help others with similar questions. Â Yesterday, I discussed holsters for the Ruger SR9c, and today I am looking at the 300 Blackout and what kinds of loads are currently being made for it.

Introducing a new caliber to the firearms community takes guts. Â After all, what can’t be done with what is already on the market. Â IÂ believeÂ the 300 AAC Blackout is a cartridge that fills a unique position, and not just survive the early adoption period, but become a thriving cartridge outside of a narrow niche.

Earlier this year at the 2012 SHOT Show, we saw a lot of new rifles and uppers being made for the 300 Blackout. It seemed like every AR manufacturer introduced at least one new 300 BLK gun. Â I took this as a very good sign for the health of the caliber.

Spending a little time researching the ammo selection showed me that there really are a lot of load options available to shooters. Â  Here are the loads I found (so far):

Barnes BulletsÂ – Â More known for bullet manufacturing than for ammunition loading, Barnes is making a 300 AAC Blackout round. Â The cartridge uses the company’s 110 grain TAC-TX bullet that is rated at 2350 fps at the muzzle. Â That works out to about 1349 ft/lbs of energy. Â Currently, Barnes does not make a subsonic load for the Blackout.

CorBon/Dakota Ammo – CorBon currently offers four different 300 BLK loads. Â Two are supersonic and one is subsonic. Â They are:

DoubleTap Ammunition – Hitting the two extremes with this cartridge, DoubleTap is making a lightweight, fast moving load and a heavy, subsonic load for this caliber. Â The lightweight load uses a 110 grain Barnes TTSX bullet that makes for 2400 fps out of a 20″ barrel and 2250 fps from a 16″ barrel. Â That works out to 1407 ft/lbs and 1237 ft/lbs respectively.

Gunn Ammo – Gunn Ammo offers three different Blackout loads, but does not publish any ballistics information for them. Â The three loads are a 130 grain SOST load, a 147 grain FMJ load and a 220 grain subsonic load. Â SOST, if you are not already familiar, is an open tip bullet design that was adopted for combat use by the US Marine Corps. Â It is not a hollowpoint design, rather it is more like an open-tip match (OTM) bullet. Â Do not expect expansion from this bullet. 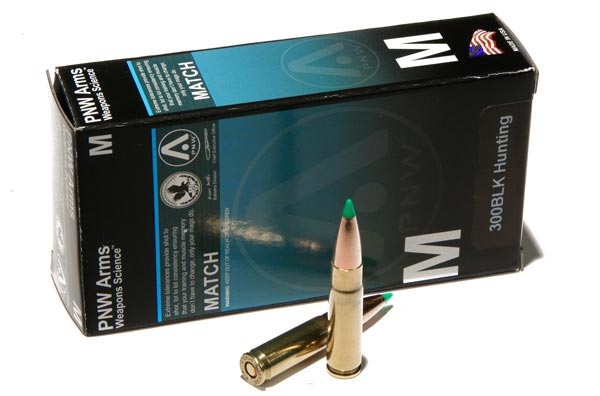 Remington – Remington is the only “big dog” that has committed to the 300 Blackout. Â Thus far, Winchester and ATK (Federal, Speer) have taken a wait and see approach. Â Remington is currently loading four rounds for this caliber: 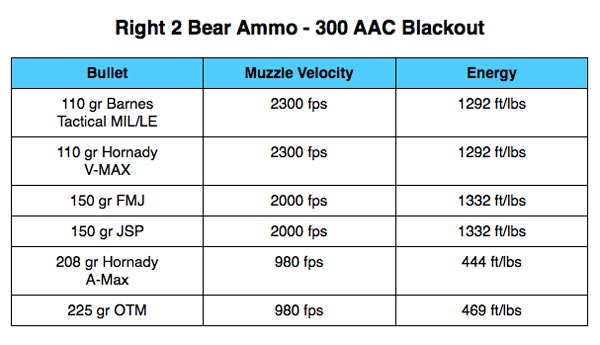 I know that the 300 Whisper ammunition is supposed to function flawlessly in 300 Blackout rifles, but I intentionally did not list 300 Whisper loads in this list. Â Hornady, Black Hills and others make Whisper loads. Â However, it looks like the Whisper is dying off, and it is merely a matter of time before these companies shift their focus to the Blackout.

I hope this list proves useful to anyone looking for 300 AAC Blackout ammo. Â If I have missed any ammunition loads, please set me straight in the comments section. Â I want to make sure everything is listed.

Still waiting to see any real guns in 300 Blackout. Do they actually exist?

Bought one today. CMMG gas impingement, flat top. I have seen a few others with piston systems but they were more than I could spend.

[…] seems to be a good powder for a variety of 300 BLK loads, but I would be interested in seeing if anyone works up some good loads for this bullet with the […]