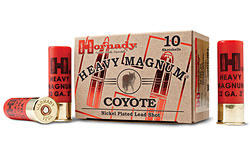 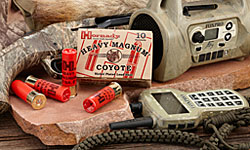 Are there a lot of people taking coyote with 12 gauge shotguns? Â I presume that if you kept a Remington 870 in the truck while you were on the ranch, it would be helpful to have some long-reaching shotshells ready to go for predator control. Â Beyond that, however, I just don’t know how big the market is for these shells.

Sound off in the comments section if you have some experience in taking coyote, either as a sport or as predator control. Â Are you using a shotgun? Â AR15?

I just ran across this while searching for reviews on this ammo. I think there is a big market for such ammo. Rich says “Are there a lot of people taking coyote with 12 gauge shotguns?”. Well here in the northeast when we run hounds we use almost exclusively 12 gauge for bobcats, fox, and coyote. Also calling coyotes, fox, and bobcats in cover a shot gun is much more of an asset than a rifle. Also the AR is not even a legal hunting choice here. I hope this round pans out because $45 for heavyshot is a little pricey for this poor boy.