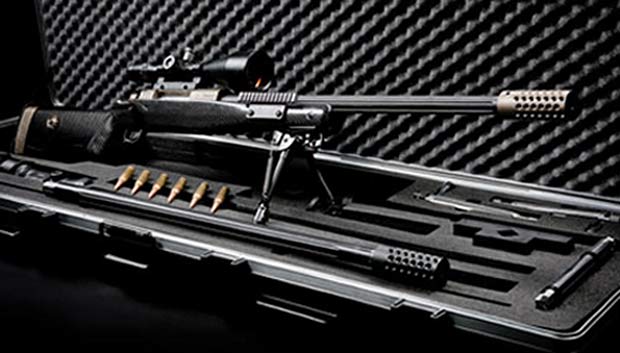 The new Caracal CH300 precision hunting rifle was announced at the 2013 Abu Dhabi International Hunting & Equestrian Exhibition. Â The CH300 was one of several new rifles Caracal displayed at the exhibition.

The CH300 is a single-shot, bolt-action rifle that, like a growing number of high-end rifles, features the ability to rapidly change calibers. Â Caracal claims that swapping calibers in the CH300 is easy, requiring only a barrel and bolt change to move between three different calibers.

Regarding calibers, there is a discrepancy in the Caracal literature. Â In the description of the gun, calibers are listed as .308 Win, .300 Win Mag and .338 Lapua. Â However, in the technical specifications, the .308 is not mentioned, and is replaced by the .408 CheyTac. Â I doubt I need to say it, but there is a huge difference between the .308 and .408 cartridges.

Reading through the specs, it appears that .408 CheyTac is the correct caliber. Â When I am able to get more definite information from Caracal, I will update this page.

The Caracal CH300 has a carbon fiber stock that is filled with some kind of dampening foam that the company claims to reduce felt recoil. Â No measurements regarding the amount of recoil reduction achieved have been published by Caracal.

The trigger is a fully adjustable, two-stage trigger.

Barrel length is listed as 29.1″ (approximately) for the .300 Win Mag and for the .408 CheyTac, and 26.8″ for the .338 Lap Mag. Â The weight is listed as 18.1 pounds for all three configurations, though I would imagine the .338 Lapua would be slightly lighter due to the shorter barrel. Â There appears to be some type of significant muzzle device in the pictures of the new Caracal rifle.

The CH300 has a “Euro Size rail” for attaching a bipod. Â What, if any, accessories are included with the rifle is not known. Â It is also unknown if Caracal will ship the CH300 with more than one caliber.

It is not yet known if this rifle will be imported to the United States. Â No MSRP is listed for the rifle.

The Caracal CH300 is one of several new firearms introduced by Caracal in a significant product line shake-up.

I agree with Carl – foam filled stocks reek of cheap, and not of quality. It would appear that Caracal sought a way to reduce price with a unsubstantiated claim of reduced recoil. Give me a solid stock to absorb recoil, along with a rubber butt stock and call it good.

Some of the latest recoil-reduction using springs inside the stock seems acceptable, but not foam.

The gun looks nice, but I just don’t know if I can imagine this company as a precision rifle maker. We will see I suppose, but I will not be one of the first in line for one.