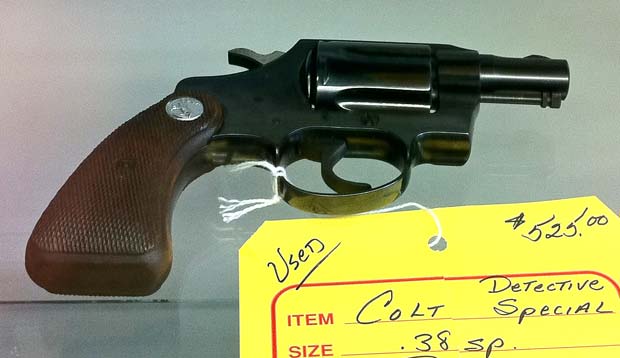 Will Colt’s Manufacturing Company (aka Colt) bring back the double-action revolver next year? Â It sounds like there are serious moves in that direction, and we could see something in 2014.

Colt abandoned the double-action revolver market during the last decade for a variety of reasons that were never made public. Â However, popular speculation suggests that the Colt revolvers were not price competitive. Â Combined with the flagging demand for revolvers, the manufacture of the revolvers was either not profitable, or maintained only very thin margins.

But now, it looks like Colt is tooling up for a new run of double-action revolvers.

Joyce Rubino, the vice president of marketing at Colt’s Mfg Co, made an appearance on Tom Gresham’s Gun Talk last month. Â During that conversation, Gresham asked if Colt would ever re-introduce the double-action revolver. Â Rubino stated “I certainly hope so.” Â But, Rubino did not stop there. Â She continued:

Yes…We are looking into the investment that would be required to bring back the double action revolver line. Â I can’t say which versions or SKUs would be available first.

A short time later, Rubino added that the company was looking “…to see what we can get into the marketplace first.”

If (when) Colt rolls out new revolvers, it would be reasonable to expect just a few models initially. Â While Colt had a number of highly respected revolvers, I would expect two different models initially: Â the Python and a variation of the Detective Special.

The Python would be, to me, an obvious choice. Â This revolver was considered one of the best, if not the finest, double action revolver to ever be made. Â I’ve never owned one, but I have shot them, and they are very nice shooting guns. Â I’m sure the company could sell a boatload of these with that beautiful Colt bluing.

The key to Python sales would not be competitive pricing, rather it would be offering the premier .357 Magnum revolver. Â Going cheap and competing on price with this revolver would be a huge mistake.

An updated Detective Special would make a lot of sense to me as well. Â Concealed carry handguns have been a large driving force in the gun market for many years now, and I do not think that demand will abate in the near future. Â Smith & Wesson continues to see very good sales from their line of J-frame revolvers like the 642. Â I expect Colt would like to take a piece of that market from S&W.

The Detective Special offered the advantage of six rounds compared to the S&W five rounds. Â That one-shot advantage resonated with many buyers in years past, and I expect it would continue today. Â If Colt offered a “hammerless” version of the Detective Special, and get the price in the neighborhood of the 642, I suspect they would have a winner with this gun.

What do you think? Â Will we see new Colt revolvers at SHOT Show? Â What would be your first choice in production?

30 replies on “Will Colt Re-Introduce Double Action Revolvers in 2014?”

I picked one up in 1983. Still have it. Manufactured in 73. has holster ware and colt last I checked, charging 525.00 for refinish. Absolutely the finest revolver I (and many of my friends) have ever fired.

[…] No, but there's a half-ass decent chance they'll make DA revolvers again at some point, they've even officially said they're considering it (which doesn't mean they'll do it, but at least they know there's a market for it): Will Colt Re-Introduce Double Action Revolvers in 2014? […]