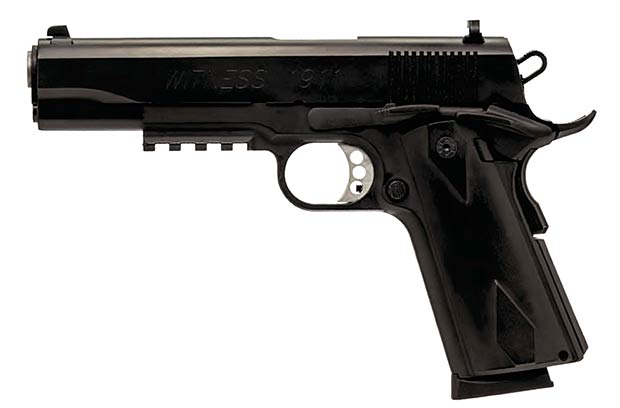 European American Armory Corp (EAA) will start selling a polymer 1911 in 2014. Â The new new pistol will resemble a traditional 1911, but will have a black plastic frame.

A prototype of the Witness Polymer 1911 was on display at the 2013 SHOT Show, but there were no definite plans announced regarding production, when the gun would ship, etc. Â It appears that Tanfoglio moved ahead with the project and the polymer 1911 is a reality.

According to EAA, the frame will have steel inserts, which I can only assume form the slide rails. Â Additional steel inserts could be used to reinforce the frame if testing indicated the need. Â Glock and others have been making .45 ACP plastic pistols for years, so I do not see any problems with the durability of the polymer framed 1911.

My current information suggests that the gun will not be California, et al. certified initially. Â I cannot speak to the vagaries of the “safe gun” laws passed by a few states, so I do not know if this gun would ultimately be acceptable to the politicians of those states.

We will see more of this gun at the SHOT Show in January. Â Make sure you check out our update page for news from the show.

Wow, that’s inexpensive. The missing piece of information, though, has to be the weight. With the steel inserts, how much less than a steel 1911 could it weigh?

I like to see developments in the application of new technology to firearms. I also like to see forward thinking in improvements to John Moses Browning’s designs. I hope it shoots as good as it looks. EAA makes fine firearms, well done!