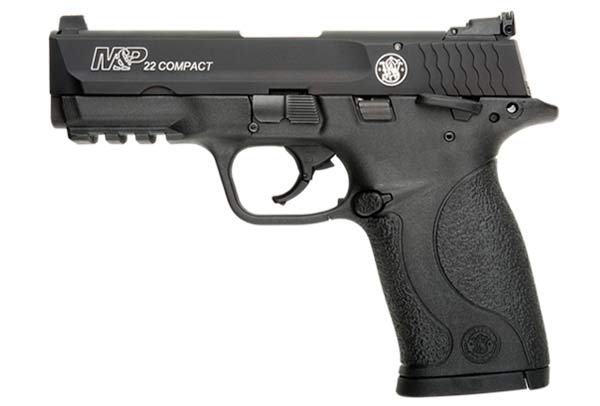 Smith & Wesson officially introduced the M&P 22 Compact pistol this morning. The new rimfire handgun is similar to the original M&P 22, but about 15% smaller. It is chambered in .22 LR.

The new gun makes fun “funner” according to S&W.

The new gun has the overall look and feel of the M&P pistol line. Beyond looks, there are a number of differences between this gun and the standard centerfire pistols.

The slide, for example, is made of an aluminum alloy instead of stainless steel. Recoil from the .22 LR is a great deal less than that of a 9mm or other service cartridge, so an aluminum slide can be durable enough to give years of reliable performance in this gun.

Unlike the centerfire guns, the M&P 22 series pistols use a hammer fired system. The hammers are completely internal, so the guns have the appearance of being striker-fired.

These pistols have an accessory rail for the addition of a light or laser. They also have a manual thumb safety, which is an optional addition to the centerfire line of M&P pistols.

Very much like a Ruger SR22 only about three or four years later.

I bought one the moment I first saw one (well after the release date)…I LOVE IT!…This full-size .22 caliber pistol is great for training…It is also an excellent competition pistol for kids who aren’t quite old enough to handle the 9mm…

This is a fantastic 22LR pistol. It definitely outclasses and out shoots my Ruger MkIII 22/45 and MkIII 22/45 LITE. It fits your hand like God himself designed it and eats everything that I have had the chance to put in it. I certainly recommend it and will be buying another to put away for my kids. They can’t have mine till I’m dead and even then they’ll have to pry it out of my cold dead hands. To recap: I love this little handgun; it’s sooo much fun to shoot.