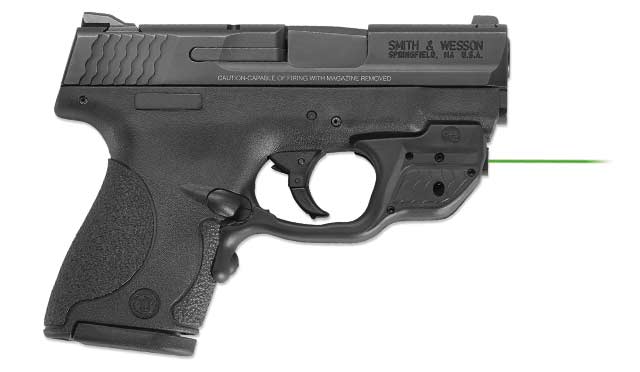 Smith & Wesson will be selling a new Shield package with a green laser in 2015. The new SKUs will cover both the 9mm and .40 S&W versions of the pistol.

It appears that the company will begin offering a package that includes the Crimson Trace LG-489G Laserguard as a standard feature. Smith & Wesson has worked with Crimson Trace in the past, including on the recent overhaul of the Bodyguard line of guns.

The new guns are actually not new, but rather a packaging of the very popular pistols with the new CT laser. So, all of the specs on the M&P Shield will be the same. The MSRP on the gun packages will be $589.

At this point, I do not know if the guns in this package will have the thumb safety. I hope that S&W offers the packages both with and without the manual safeties to make everyone happy.

Crimson Trace introduced the LG-489G earlier this year. It attaches to the front of the trigger guard and puts anÂ activation button on the front face of the grip. The button allows for the shooter to easily activate the laser by simply grasping the pistol grip in a firm manner. 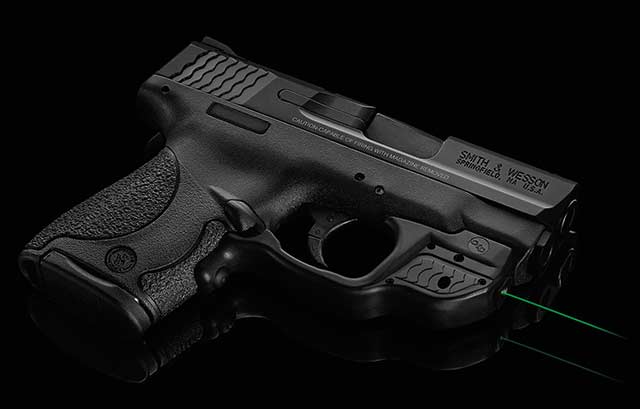 It looks like Crimson Trace did a very good job at matching the laser housing to the frame of the pistol. While it does add some bulk to the gun, its addition does not look unnatural or awkward.

Of course, one of the problems with adding a laser to your defensive handgun is finding a holster that will fit it. I’ve assembled a list of carry rigs for the Shield here. The list includes holsters that are designed for the Shield with a Crimson Trace laser attached.

If you are not already familiar with green lasers, the big selling point for them is that they are much more visible to the human eye. Often a red laser can be lost in bright lighting, yet a green laser may be perfectly visible in the same conditions.

Traditionally, green lasers have been harder to manufacture and use a lot more battery juice. Recent advancements have made them a much more viable tool for self-defense weapons. I personally have a Streamlight TLR-2G mounted on my full size M&P9.

The Shield has been an excellent seller for Smith & Wesson. It is easy to understand why. They are lightweight, accurate and easy to shoot. It makes a lot of sense to me that S&W would want to offer a package that includes one of the most popular accessories for the gun.

Hey Richard,
Great to be on the forefront of new Shield offering with CT Green Laser! Thanks!

Hard to get a hold of nationwide at the moment due to high volume sales. I was able to locate one at a dealer in PA & he is shipping in to my local dealer in IN. For the wife……..her first gun ever. I personally carry a H&K .40 USPC with a Veridian tactical light & green laser. Green is the way to go. Nice this gun comes with the laser.