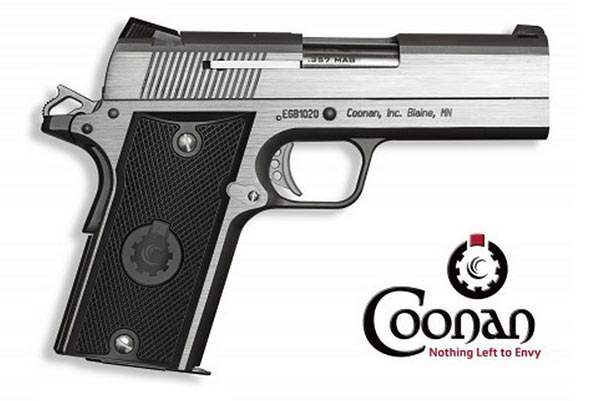 Coonan Inc. will officially introduce the new Compact version of the company’s 1911 chambered for the .357 Magnum at the 2015 SHOT Show.

The Coonan Compact pistolÂ was originally shown at the 2014 NRA show, but the gun has yet to make an appearance on the company’s website. Currently, Coonan only shows the original .357 Magnum Automatic as being sold.

Here is what we know…

The pistol was designed by Dan Coonan more than 30 years ago. After building the original company, Dan Coonan sold his interest in the company. Years later, the company went bankrupt and eventually was dissolved. About five years ago, Dan Coonan established Coonan Inc., and returned to building the classic pistol.

Now the company is offering a more compact version of the pistol. According to Coonan:

This compact fireball is not made for the meek, timid or beginnerÂ shooter.

According to Coonan, the new Compact will have a 4″ barrel and will hold six rounds in a single stack magazine. Including one in the chamber, this gives a shooter one additional round more than the classic revolvers that were designed for the .357 Magnum.

The guns have dovetailed front and rear sights. Both the frame and the slide will have a matte stainless finish standard. Another version with a black Duracoat finish will also be offered. Grips will be made of black walnut. In addition to the checkering, the stocks will have the Coonan logo engraved in them.

Specific weight, width and overall length measurements are listed in the table above. The MSRP for the stainless finish isÂ $1,535. A Coonan Compact with a black Duracoat finish will set you back $1,975.

At the 2014 annual NRA show, the companyÂ had an example of the Coonan Compact pistol on display. At that time, it wasÂ believed the gun would ship by the end of the year. A few guns have apparently shipped, though the company seems to be pushing the 2015 SHOT Show as the big public launch of the gun.

Part of the reason for the delay in marketing push might be related to the company’s backorder of gun production. As a smaller company with a popular product, demand outstripsÂ supply. Consequently, production times are delayed – some as much as 12 months.

The good news is Coonan expanded its production capacity. Wait times are now said to be in the 4-8 week range. For a semi-custom pistol, that is a pretty fast manufacturing time.

I own a coonan compact.357 I’m just looking for mfg history of this gun but couldn’t find any information ,is there a way you can help??

I’m not an expert on Coonan pistols but will help if I can. Specific information – such as when was a specific serial number made – will be beyond what I can provide.