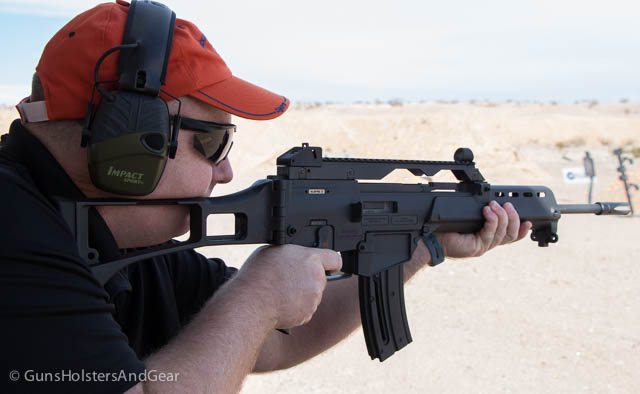 The Walther G36 is a blowback rifle with an 18.1″ barrel and 20-round magazine. Without a magazine, the gun weighs 5.1 pounds. However, the gun feels much lighter than 5 pounds – perhaps because my mind expectsÂ the “real” G36 weight when I picked it up.

Walther included an ambidextrous safety (semi-auto fire only), a folding charging handle and folding stock on the gun. Accessory rails are included at the 3, 6, and 9 o’clock positions.

The top rail has plenty of space for mounting an optic. However, the included sights worked very well and at 25 yards, it was exceptionally easy to ring a plate as fast as I could pull the trigger. The rear sight is adjustable for both windage and elevation.

Recoil was virtually non-existant, which was not really a surprise. It is a rimfire, after all. I ran one magazine through the rifle and it functioned flawlessly. One magazine doesn’t prove reliability, I know. However, I have extensively shot the Walther version of the HK 416 in the past year. That gun ran flawlessly through more than a thousand rounds of ammo.

Bottom line, this was a fun gun to shoot. The MSRP is $465, though I would expect to pay closer to $400, or maybe even a hair less. $400 may seem like a lot of money to some for a recreational .22, but it is an officially licensed HK gun.

I’ll try to get more photos of this gun in the coming days. When I do, I will update this page.

I’ve now been told that the MSRP will be $599 for this rifle. Also, the guns are now shipping.

The guns will com with:

A detachable sling swivel is sold separately. No word on the pricing for the swivel.

i have the umarex hk .22 mp5 and it isnt anything i’d trust my life with. Definitely for rec use only, i’d rather put that money in a keltec sub 2000 or something more versatile.