Diamondback Firearms introduced a new line of AR-10 style rifles at the SHOT Show. The new guns are SR-25 pattern rifles and are chambered for 7.62×51.

At the show, two different rifles were on display. Let’s take a look at what Diamondback was showing…

As stated above, these guns are SR-25 type rifles. They uses uppers and lowers CNC machined from 7075-T6 aluminum. An oversized trigger guard is standard on these rifles.

All guns have single stage CMC triggers with a nominal pull of 3.5 pounds.

The DB10B appears to be the company’s base rifle. It uses an 18″ heavy barrel that is threaded and capped with a JP Enterprises standard profile compensator. According to company literature, an A2-type birdcage will also be available.

A variety of Magpul parts are used on this rifleÂ including the buttstock and pistol grip. The hand guard is an Odin Works KeyMod rail. No sights ship on the rifle.

The EFDE version of the rifle shares the same basic features as the DB10B, but with a number of upgrades.

An Ergo Sure Grip is used for the pistol grip, and the buttstock is the Magpul PRS adjustable stock. An unknown brand ambidextrous charging handle is also used on this version of the gun. (Update: I received an e-mail from Parabellum Armament who advised it is their ADO Ambidextrous Oversized Charging Handle. Thanks for the information!) 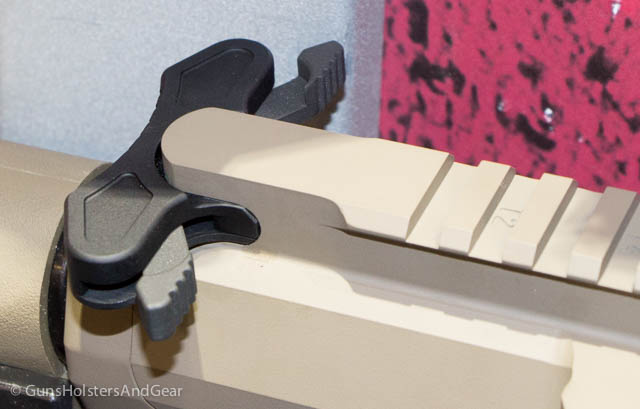 According to the Taurus rep I spoke with (Taurus Holdings owns Diamondback,) there is not a definite shipping date set.

One reply on “Diamondback DB10 Rifles”

That’s Parabellum Armament’s Oversized Ambi Charging Handle on that DB10EFDE. One of the best and most durable available.