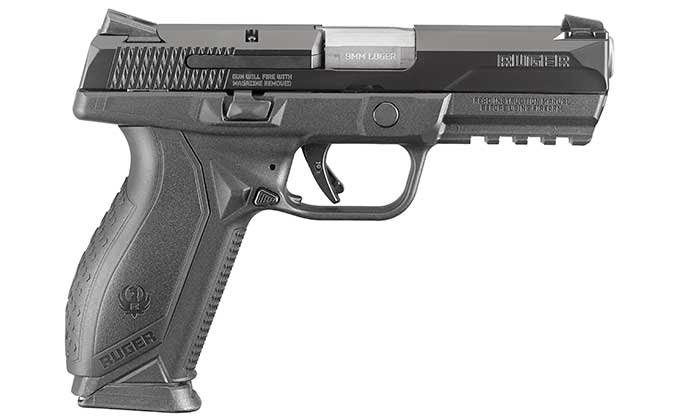 In general terms, the American Pistol is a line of duty-sized handguns that use a polymer frame and striker system. Initially, the guns will be available in both 9mm and .45 ACP, though the company hinted that these pistols are just the start of a vast line.

Let’s take a look at the highlights…

Of Recoil and Cams 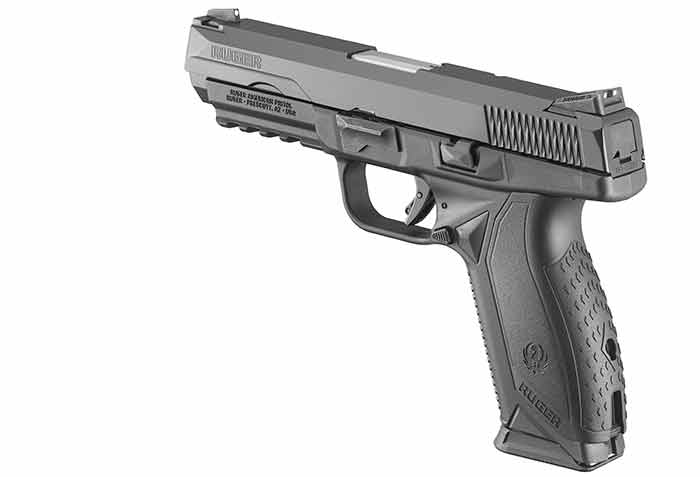 When referring to the gun as the “most advanced pistol” the company ever designed, part of that statement comes from the development of the cam system used. Ruger developed a new cam system that spreads the recoil impulse over a longer period of time, absorbing some of the energy and reducing the shock of the remaining pulse. The result is less muzzle flip and a better shooter experience.

With the use of a cam system, the engineers were able to reduce the slide mass for decreased gun weight and better balance of the pistol in the hand.

Trigger Pulls and the Striker-Fired System

Many modern pistols are striker-fired, and the American Pistol uses a striker system as well. According to the company, the striker is pre-tensioned and gives the trigger a “short, crisp” pull feel similar to that of a single action pistol. This is a big claim, and I look forward to testing it out on the range.

Another factor that goes into trigger manipulation is the trigger reach. When a shooter’s finger properly addresses the trigger, the pull is both more comfortable and less likely to pull shots off target. Ruger addresses the issue with wrap around grip modules.

No trigger pull is required to disassemble the pistol. 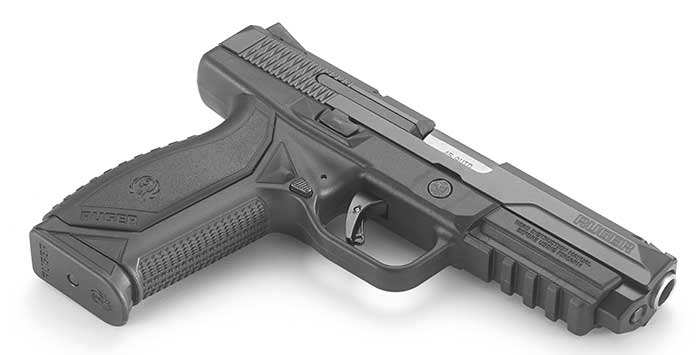 Ruger spent many years developing the American Pistol. Part of the engineering and testing process included running the gun in all kinds of temperatures, inclement weather, and various mud/dirt/dust conditions. Ruger claims extreme reliability in all conditions.

One of the reasons why Ruger is confident in its gun’s reliability is the internal chassis. Ruger uses a single piece, stainless steel chassis that houses all of the fire control system. This is similar to the Smith & Wesson M&P design but is definitely not the same design.

Ruger also tested these guns with a sustained diet of +P ammunition. 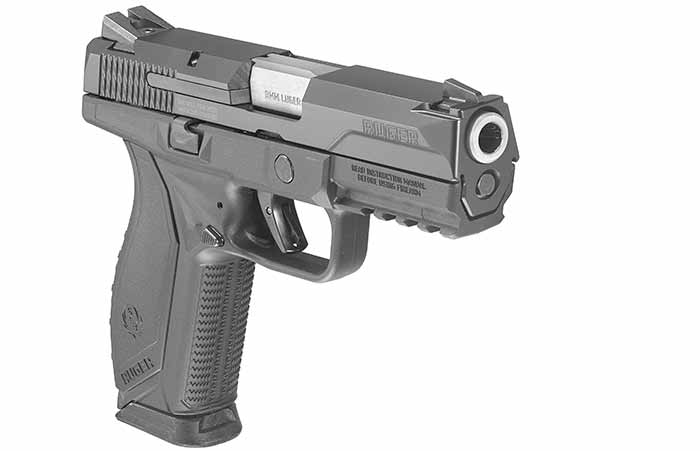 Plain, three-dot Novak sights are standard on the gun. Frankly, I dislike these sights, but recognize that a lot of casual shooters do like them. For me, I prefer a system where the front sight is much larger and/or brighter than the rear sight for rapid target acquisition in stressful conditions.

Additionally, the ramped front on the rear Novak sight might be good for the nearly-mythical instance of catching on a cover garment, but it precludes the shooter’s ability to use the rear sight for one-handed slide manipulation. For a combat handgun, this is a must in my opinion.

Fortunately, there will be many aftermarket sights available for these guns. So a shooter can upgrade the pistol. It would just be nice to have the option factory installed.

When starting a new pistol line, finding holsters can be a little difficult. Fortunately, Ruger worked with a few scabbard makers so there would be options at launch. Check out the ever growing list of holsters for the Ruger American Pistol here.

As with most combat-oriented pistols, Ruger built the American Pistol with a Picatinny-type accessory rail. This allows the addition of a weapon mounted light, laser or other bit of kit.

Ruger ships the American Pistol in a hard plastic case that can be used for storage and transportation. Included in the box are two magazines, the wrap around grip modules, an instruction manual and a cable lock for securing the firearm.

A patent application published in October appearsÂ to show the American Pistol, fire control system and recoil reducing cam system. Here is the first diagram from that application: 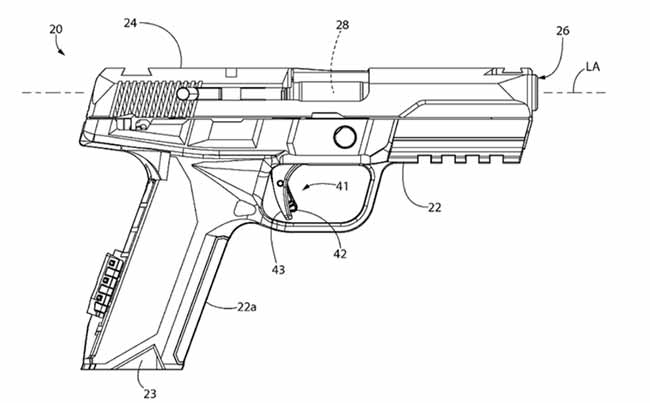 Ruger went into great detail on the cam fire control system in this application (as you have to do for such things.) Below is one of the diagrams of the system: 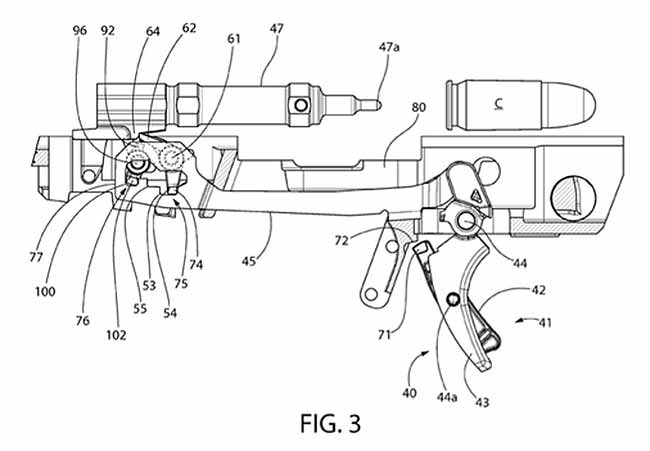 The document below is a copy of the patent application for this new gun.

As I mentioned in the beginning of this article, Ruger is already hinting that these guns are just the start of the new line. So, where does Ruger go from here?

I think that the addition of .40 S&W to the line is a no-brainer. Even though many law enforcement agencies are leaving the .40, there are still many that prefer it. Additionally, there are many citizen shooters that like the cartridge. Consequently, I expect that the round will be added sooner rather than later.

I also expect to see compact versions of these guns rolled out in the coming months and years. It seems Ruger is intent on building the American Pistol into a complete line of solutions for all kinds of combat handgun problems. Sub-compact handguns for concealed carry and back-up would be the next models in my estimation. Mid-size compacts and long slide guns are a possibility as well.

I think Ruger potentially has a great handgun system in the American Pistol.Â Assuming the guns perform as the company claims, these guns can be Ruger’s way of kicking in the door on military and law enforcement contracts. While I expect that the company’s loyal fans will buy these, they also offer a number of compelling reasons to bring new fans into the fold.

(Ed. note: A special tip o’ the fedora to Ryan at Handgun Radio. He helped with some of the information in this article.)

to me, the trigger is no problem at all… and have to say that I just love my Ruger American in 9mm. Shoots great and comfortable. Glad I bought it!!!

I’ve had the American 45 ACP for over a month now. I love the balance of the pistol. It is easy to shoot accurately. There has been no problems with it jamming. The reduced recoil is a plus.