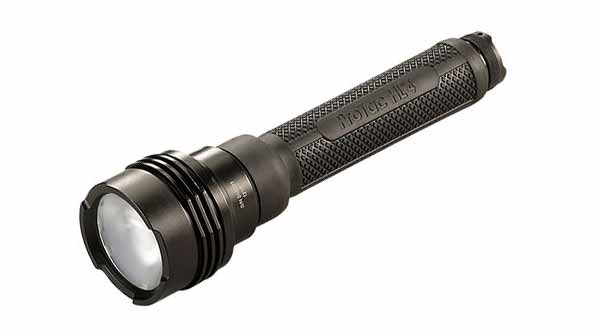 Streamlight juiced the ProTac series of flashlights with its newest light, the HL 4. The new HL4 is a handheld light that is rated at 2,200 lumensÂ making it one of the brighter handheld torches on the consumer market today.

The Pro Tac HL 4 is one of the brightest battery powered, hand held flashlights in the Streamlight catalog. As stated, it throws 2,200 lumens on its high output level. Its two lower output levels offer 600 and 60 lumens respectively.

However, lumens are only part of the story. Another aspect is the peak beam intensity expressed in candela. Lumens measures total light output while the candela measures the center beam intensity. At the highest level, this flashlight puts out 30,000 candela.

A larger candela measurement would tend to indicate a more concentrated beam. However, based on my experiences with other flashlights, I would guess that this has a decent center beam, but with a lot of spill. For area searches outside, this should provide decent reach but still give you a lot of periphery lighting as well.

The ProTac HL4 is rated to run for 1.5 hours (90 minutes) on high. This is measured according to the FL1 standard. The standard is not perfect, and more details on the FL1 standard can be found here. However, I have found that Streamlight flashlights tend to perform much better than other brands that drop off of peak output very rapidly.

While I question the usefulness of the FL1 standard when it comes to runtime, it does set out a good set of tests for impact and water resistance. In my own testing, I’ve found that the impact test is where most flashlights will fail, but that the Streamlight flashlights tend to do well in these areas.

According to Streamlight, the HL 4 has a 1m drop resistance rating. That means it can be expected to survive six drops onto hard concrete without negatively impacting its ability to work and retain its stated level of water resistance. More details on the drop testing can be found here.

The ProTac HL 4 is also rated as having anÂ IPX7 water resistance. This means it is waterproof – not merely resistant – at a 1m depth for a minimum of 30 minutes. To date, all of the Streamlight flashlights I have submersion tested have passed. Water testing details can be found here.

The body of the flashlight is made of aluminum with a black anodized finish. Streamlight includes a rubber sleeve on the body to provide a better grip and insulate the hand from the heat generated by the flashlight. Based on my prior testing, the surface temperature of high intensity flashlights like this once can exceed 145Ëš F. I imagine this one gets pretty hot also.

A Ten-Tap switch in standard. This switch allows the user to do simple programming so that he or she can choose how the switch operates. With three levels of output plus a strobe, some people want to eliminate some of those options. For example, if you want high output only, you can program it to do just that.

This flashlight is backed by Streamlight with a limited lifetime warranty.

I have had a chance to test two of the other ProTac HL flashlights that Streamlight offers. The original ProTac HL is a two-battery light that is rated at 600 lumens. It offers a great deal of power with a flood style beam. For room clearing, this is my go to light.