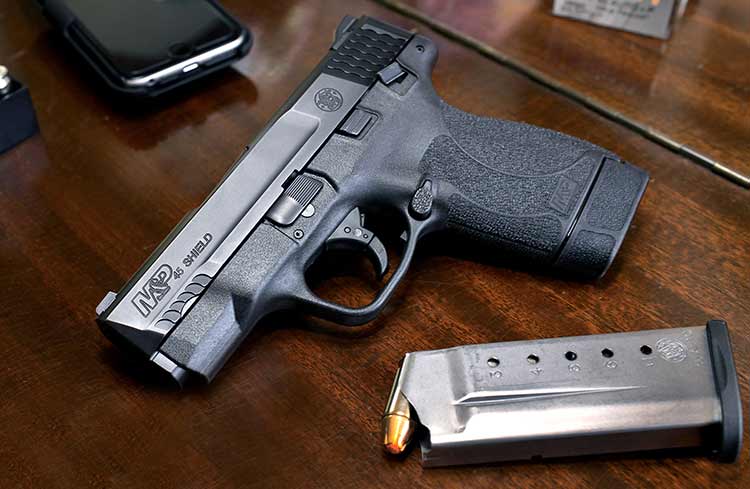 Smith & Wesson made a long awaited forÂ announcement regarding the M&P Shield line at the 2016 NRA Annual Meetings: the guns are now available in .45 ACP.

The new M&P45 Shield pistols are similar to the originals, but they differ in ways beyond just caliber. Both the looks and size of the new guns have changed also. 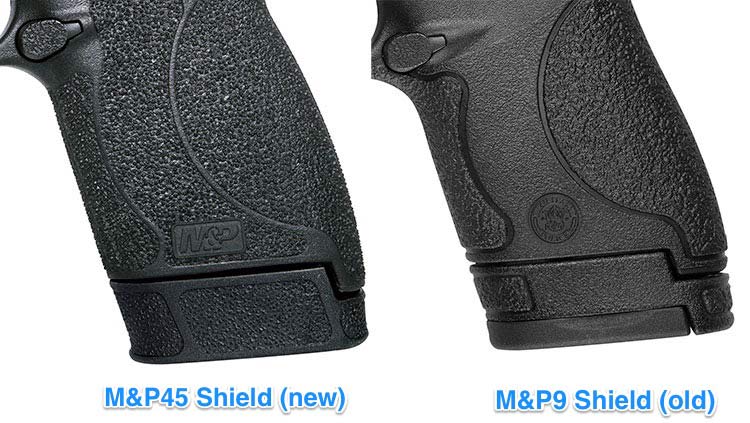 Starting with the aesthetics, Smith & Wesson changed the grip texture on the pistol. The new texture has the appearance of a stippling job – though much nicer than many of the home spun versions that I see pop up in my Facebook and Twitter feeds.

The texture also extends to the middle of the grip, where on the prior M&P Shield models, the old texture was on an oversized portion of the back- and front-straps. The same texture pattern also extends down onto the extended magazine floor plates (if used).

S&W also added partial scalloping on the front of the slide, along the bottom portion closest to the frame. Smith & Wesson calls these front cocking serrations. 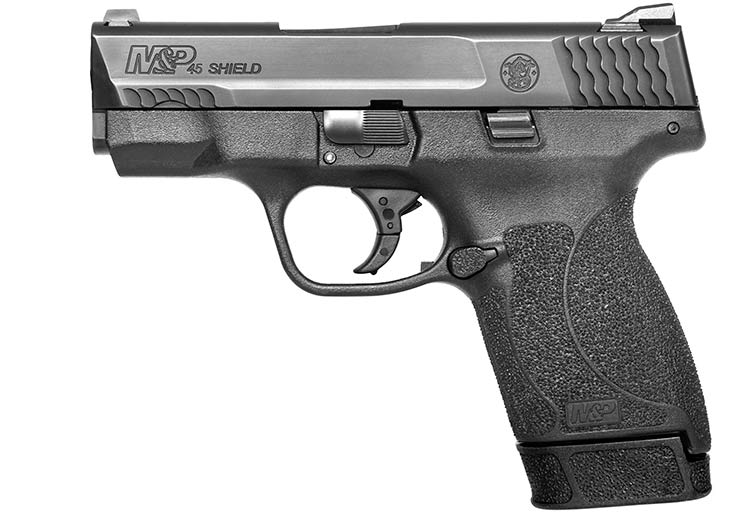 Dimensionally, the gun has changed significantly.

To start with, Smith & Wesson now lists a frame size on its webpage for the new M&P45 Shield. The company calls it “Compact Slim.” No word yet if this suggests that all future M&P pistols will be categorized into different frame sizes like the company’s revolvers have been. Right now, the existing M&P Shield pistols do not have any frame size designation.

The M&P45 Shield has a slightly longer barrel at 3.3″, and is longer overall than the original Shield pistols. The new gun is also wider and taller. While some loose fitting nylon holsters may work for both guns, I do not expect that any of the existing Kydex or leather rigs will work for the new pistol.

If you are looking for an M&P45 Shield holster, click here for my list of rigs that are already available. At the time of this writing, it is small, but will grow with time.

It is not yet clear if any of the other accessories, such as the Streamlight TLR-6, will fit on these guns. My gut tells me that many will not. 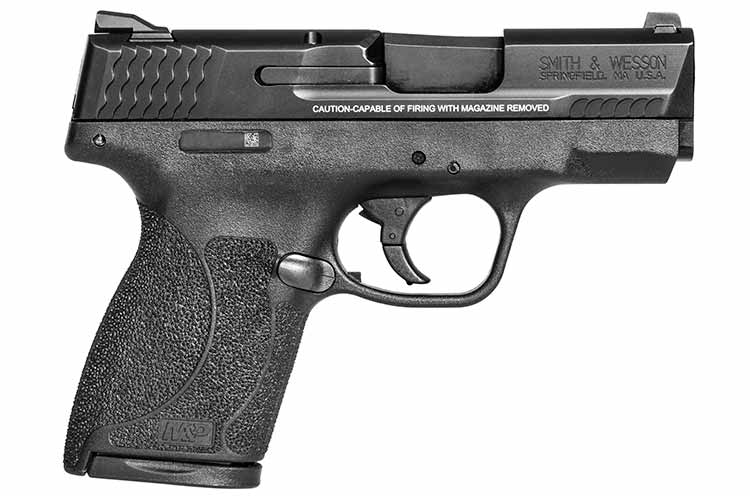 As with the prior Shield models, these pistols will ship with a single flush fitting magazine and a second, extended magazine. The shorter mag will hold six rounds, while the taller will hold seven rounds. This gives the shooter a potential of 8 rounds of .45 ACP on tap before a reload. Frankly, that’s not bad…not bad at all.

If you take a look at the detail shot further up the page that shows the extended magazines, you will notice that there is a structural change between the original and new magazines. The original 9mm & .40 S&W models used a longer magazine tube with a sleeve that fit over the magazine body to fill the gap.

However, the .45 ACP extended magazine uses the same size body and adds a +1 base. I personally prefer this method due to the variety of problems associated with having a “floating” sleeve on the magazine body. In fact, the sleeve issue was one of the problems addressed by the MagFIXÂ base plate offered by Safety Solutions Academy.

The new S&W M&P45 pistols are available both with and without the small manual thumb safety mounted on the left side of the frame. That should be pleasing to both sides of the manual safety debate.

As the gun ships, it is equipped with three-dot sights. The sights are dovetailed and can be replaced if desired. No word yet if factory night sights will be available.

I think the new gun will be a very good seller for Smith & Wesson. The .45 ACP cartridge remains a popular self defense round in the United States, and this gun is clearly intended for just that role. The original Shield models have done exceptionally well in the marketplace, and I expect that this one will follow suit.

I like the look of the new grip texture and hope that it extends to the rest of the line. While the current M&P Shield models are fine as is, a more aggressive texture will simply improve a shooter’s grip when wet hands are involved.

There is a $30 premium on the .45 ACP model. I don’t expect that this will dissuade many people from buying an M&P45 Shield if that is the gun they really want.

If you are interested in reading more of my thoughts about the M&P9 Shield, I reviewed the gun here. I am hoping the new gun will be as reliable and shootable as the old.

I LOVE this pistol! For the price it’s the best .45 on the market!

I absolutely love my .45 Shield! The more aggressive grip makes it feel like it’s locked into your hand. And amazingly, it has no more recoil than my full size M&P 9mm!

Thanks for taking the time to share your experiences with the pistol. I also really like the new textures S&W is using.

Just bought a Hi-Point 45 carbine….looking for a handgun to go with….the shield seems to fit me just right

How do you like that carbine? I know a lot of people like to bag on Hi Point, but they seem to work pretty well. The carbines are certainly priced well.