In simple terms, this is a new line of ammo that claims:

While this ammo might be considered long-range hunting ammunition because of its great performance at distance, the reality is it is an “all-range, all-velocity” line that is said to perform no matter where your target is.

Let’s jump into some of the features of this new line.

Federal designed these loads to blend the best characteristics of expanding big game ammunition with the exceptional accuracy of match-grade rounds. While compromise loads can leave the user unsatisfied with all aspects of a round, Federal Premium believes the Terminal Ascent line successfully combines all of the best attributes.

How did the company manage this?

Many hunters want high weight retention as this is a good indicator that the bullet will stay in one piece and penetrate deeply. When taking a game animal, a shoulder shot is common meaning the bullet has to penetrate heavy bone to reach the heart and lungs for a humane kill. 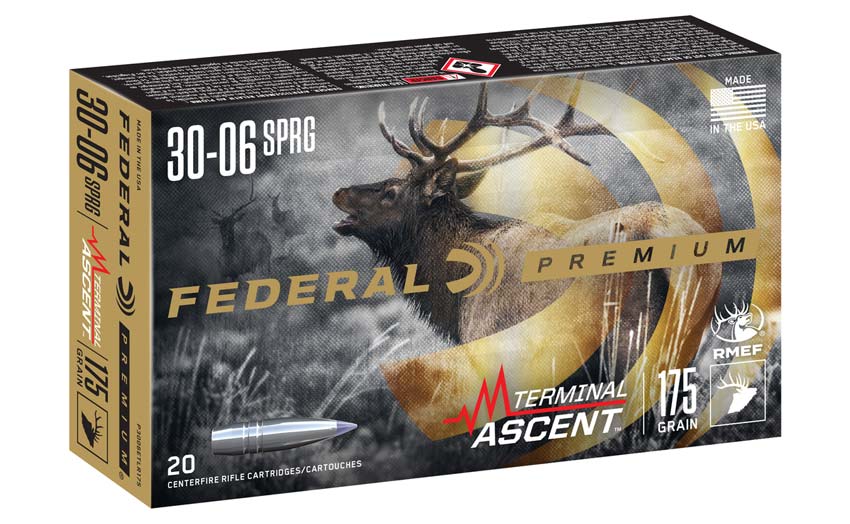 Hitting an animal at close distances means the bullet velocity will be high, which can cause over expansion and fragmentation in some bullet designs. A bonded round means that the jacket and core have been joined during the manufacturing process and will not separate when hitting a target.

In other words, bonded bullets are unlikely to shed weight and are likely to penetrate deeply enough to hit vital organs.

Terminal Ascent bullets have a solid shank: a thick copper base that supports the lead core. Combined with the bonding process, the shank helps ensure the bullet has high weight retention after hitting the target.

Polymer tipped bullets were once seen to be a gimmick by some in the industry. Performance in the field tells a different story. It now seems that nearly every manufacturer has at least one bullet line with a polymer tip. 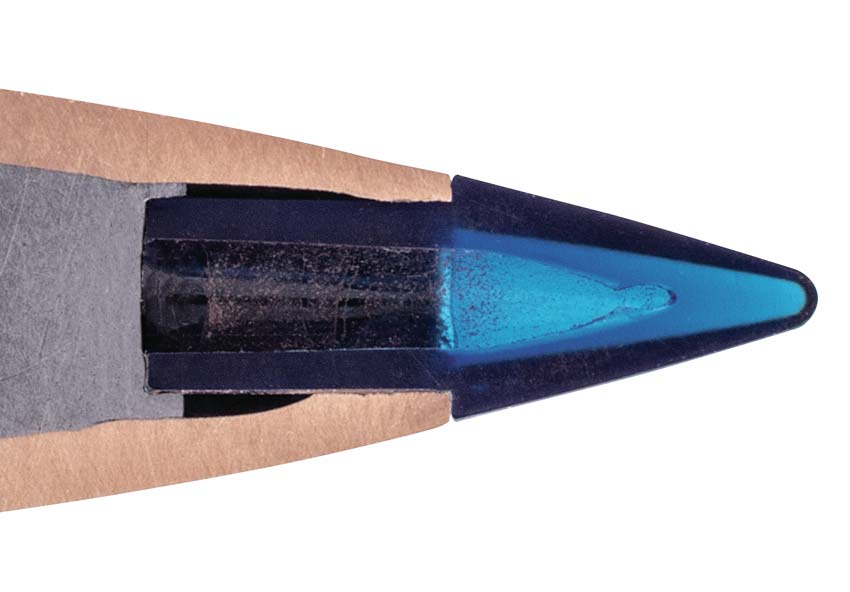 While the Terminal Ascent bullet has a polymer tip, it is not a common plastic point. Rather, it is a patented hollow core tip that initiates the expansion of the bullet at lower velocities.

During the testing of other polymer tipped bullets, Federal engineers determined that the expansion of bullets was inconsistent once the range reached 600 yards. This was due to the velocity loss at those ranges.

Initial experimentation showed that drilling a hole in the very tip of the bullet allowed for expansion at lower velocities which extended the useful range of the bullet by several hundred yards. With a hollow polymer tip, target media would enter and cause expansion – very similar to how the hollow point bullet works.

However, the hole at the front of the tip degraded the bullet’s flight characteristics. It almost seemed to circle back to square one. Would you need a polymer tip for your polymer tip?

The solution was a hollow polymer tip that did not have a hole in the exposed end. Through experimentation, the Federal design team discovered that the point of the hollow tip would break off on impact with the target. That would allow target media to enter the polymer tip’s hollow core and initiate expansion. 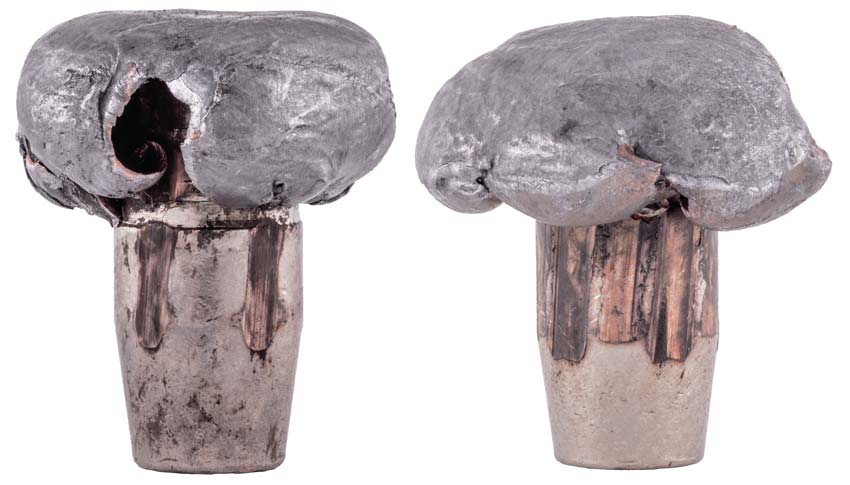 This design – called the Slipstream Tip – greatly improved the expansion of the bullet at lower velocities while maintaining the ballistic characteristics of the standard polymer tipped rifle bullet.

Another aspect of the Slipstream Tip that enhances performance is the choice of material. Federal uses the same polymer as it uses in its Trophy Bonded Tip which puts the softening temperature at 434Ëš F.

It appears to me that the Terminal Ascent line is a direct competitor to the Hornady Precision Hunter line. In that line, Hornady uses a Heat Shield tip to prevent tip softening and to improve expansion at distances beyond 400 yards.

Is the Terminal Ascent better than the Precision Hunter? I have no way of even guessing at how the two match up in the field. And the bullet weights used by each company are different in each caliber. So, there is no direct comparison of the G1 BC either.

Except for two cartridges: the 300 Win Mag and the 300 WSM. Both companies selected 200-grain bullets for these cartridges. Here is how the factory specs match up:

I’d argue we can’t make any definitive statements about the two based on this information alone. However, it would seem the two lines are going to be in the same ballpark of performance. I’m looking forward to seeing field results.

Federal developed a new process for adding grooves to a bullet shank to improve accuracy and reduce barrel wear and fouling.

For many people, the engineering for the new AccuChannel Grooving is getting into the weeds a bit. So, I’ll keep it simple.

Likewise, the team found a way to improve the groove geometry to further reduce drag on the bullet.

Ammo will be sold in 20-round boxes. Suggested retail pricing will start at $42.95 for a box and go up from there. Actual pricing is set by the dealer, and I expect to see many of these loads closer to the $30-35 range. 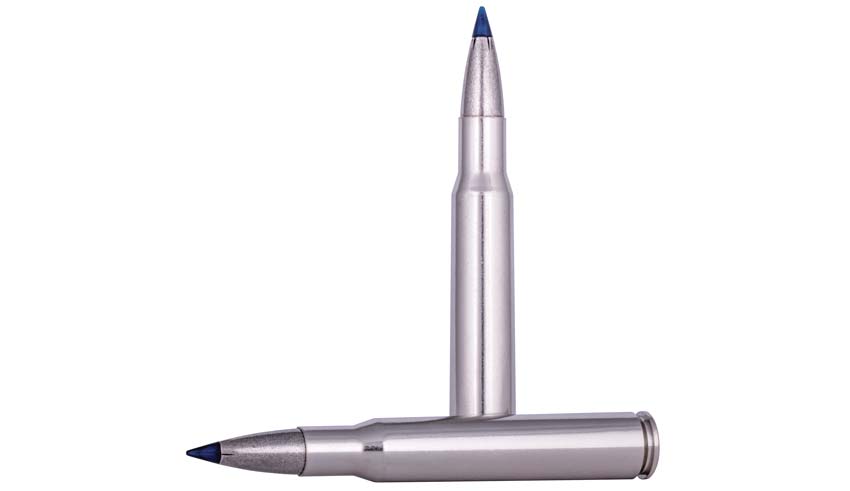 The final word on these new loads will be offered once they make it into the field. But for now, this line looks impressive. I am eager to see what they can do.

If you get some on the range or out on a hunting trip, how about leaving your observations in the comments below. I’ve got a lot of readers who appreciate hearing how these loads perform in real-world conditions.

Looks like construction of a nosler accubond, barnes ttsx, and improved vld. It’s hard to beat a bonded bullet.