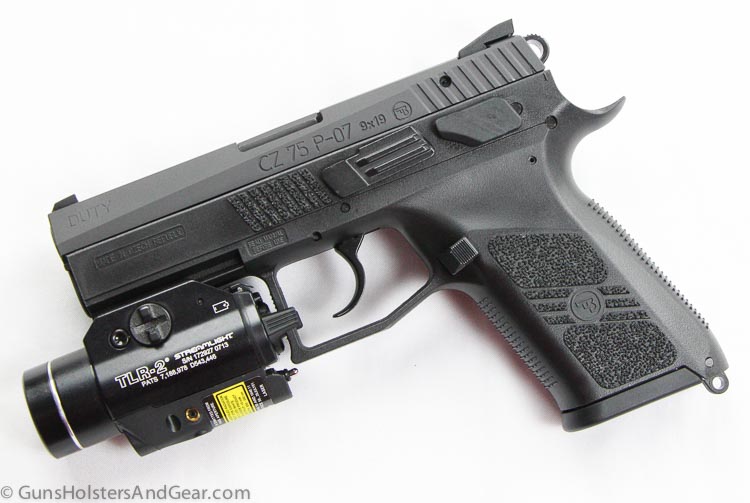 Some would argue that the CZ 75 is one of the most successful handgun designs of all times. Love them or hate them, the 75-style pistols have been quite popularÂ around the world for decades.Czeska Zbrojovka (CZ) continues to evolve the platform, and the P-07 Duty is a modern evolution of the classic firearm.

With a polymer frame, the P-07 has the looks of a 21st century pistol. But is it a worthy heir to the CZ 75 name?Â Â I was lucky enough to put my hands on one for a review and found the gun to be a good performer.

The CZ P-07 Duty pistol is a polymer-framed, hammer-fired pistol. The pistols are available in both 9mm and .40 S&W.Â For this review, I had a 9mm version of the gun. Â When purchased, the gun comes with two magazines that hold 16 rounds. The .40 S&W version of the pistol holds 12 rounds in each magazine. 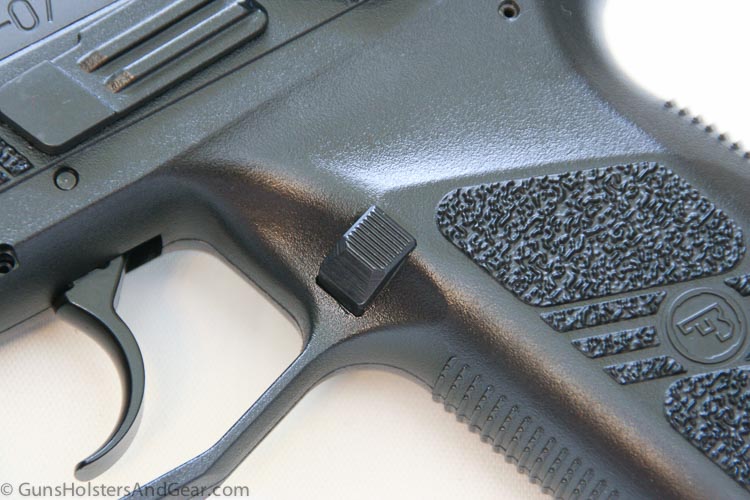 From the manufacturer, the P-07 comes configured as a double-action/single-action (DA/SA) pistol, but it can be configured as a single action pistol. Â The pistol has an ambidextrous, frame-mounted lever that acts as a decocker in the traditional DA/SA mode. Â When the gun is converted to SA, aÂ lever in the same position becomes a manual safety.

The slide stop and magazine release are not ambidextrous. 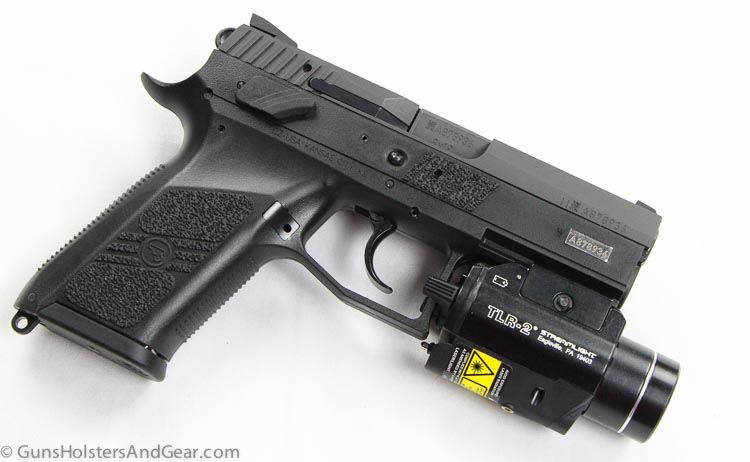 CZ designed the P-07 with an accessory rail forward of the trigger guard. I attached a variety of weapon lights to the rail and all fit and functioned as expected.

The P-07 Duty is a medium-sized pistol. It is large enough for uniformed police use, but the newer P-09 Duty with a 4.53″ barrelÂ is likelyÂ a better choice for that. Ditto for military use. 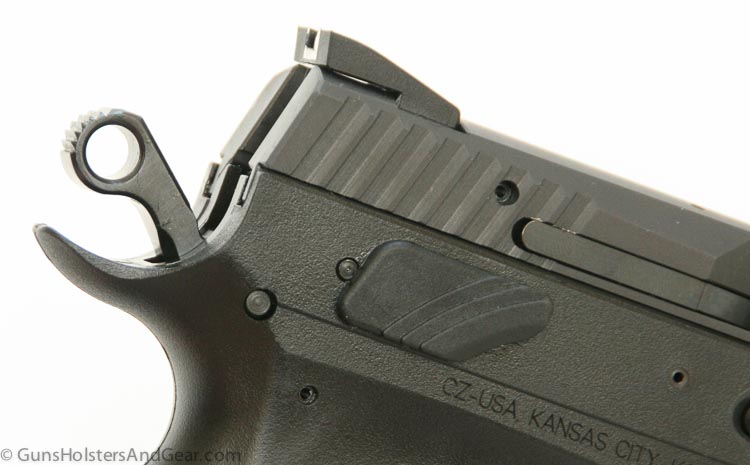 Generally, service pistols have a barrel length of 4″ or longer. The P-07 comes in under that with a barrel length of only 3.8″. At less than 4″, many people would classify the gun as a compact pistol. However, the overall width, height and length of the gun doesn’t really meet the normal parameters of what people consider a compact firearm.

Here is a comparison of several pistols:

Looking at the above table, it is clear that the P-07 is wider and heavier than the other pistols, yet has the shortest barrel.

Variations on a Theme

In 2012, CZ began making the P-07 with optional OD green frames. However, this frame color was dropped from the company’s catalog. Interestingly, the company does state that they offer variations – including different finishes – from time to time through CZ dealers. So, if green is your thing, check with your local dealers for any limited runs that may be available.

At one point, theÂ P-07 Â was available with a threaded barrel. Â The gun had 1/2×28 threads that would take most US made suppressors, and the sights were taller to clear a 1″ diameter can. Like the OD frame version of the gun, this gun is no longer offered in the catalog but could come available in limited runs.

Previously, CZ showed a prototype tactical version of the P-07 Duty with a tan colored frame and fiber optic sights. Â That pistol was never released to the public.

The P-07 Duty pistol I tested was a pre-2014 gun. In 2014, CZ updated the pistol to give it some of the features that the newer P-09 gun introduced. Among these were interchangeable backstraps, a redesigned trigger shape, forward slide serrations and a dehorning treatment.

I’ve had a chance to shoot this pistol quite a lot. Â Long time readers of this site might recall a previous review I did on theÂ CZ P-07 Duty several years ago. Â That review is no longer available due to a contractual issue, but I canÂ summarizeÂ what I wrote then: Â the gun was accurate, fit my hand well and was utterly reliable. Â My only complaint in that review was the trigger reach was too long for me to comfortably shoot the gun in DA mode. I hope the new backstrap system addresses this issue. 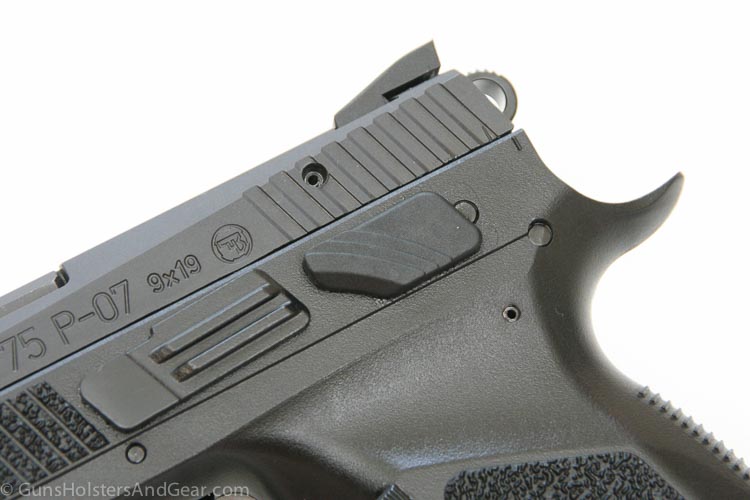 Since that original evaluation, I have had a chance to put more rounds downrange with the pistol. Â I can happily say the gun is still reliable and accurate. Â TheÂ CZ P-07 Duty has experienced only a single malfunction through hundreds of rounds and a wide range of ammunition loads. That was a failure to extract with the Hornady Critical Duty 135 grain +P load.

Accuracy is very good with almost all ammunition, but ammo loads do make a difference. Â If you are picking an ammunition load for self defense, I’d recommend running your top two or three choices through the gun to find the one that works best for you.

My majorÂ complaint about the pistol remains the trigger reach. Â The grip fits my hand reasonablyÂ well, but feels a little fat. Â The checkering on the front and rear of the grip is fairly aggressive and helps lock the hand in. Â Also, the relatively large beavertail lets the shooter get a very high grip on the pistol without fear of slide bite. Â But for all of this, my finger simply does not interface properly with the trigger.

When gripping the pistol, only the very tip of my finger addresses the trigger face in DA mode. Â This creates a situation where the torque created by my finger moving the trigger tends to pull the sights off target. Â In SA mode, the finger-trigger interface is extremely good. Â If the trigger had a short reach option (like SIG Sauer offers,) I would definitely upgrade the pistol to it.

The trigger is fairly smooth with a slight amount of take up and a constant pull in DA mode. Â SA mode has a significant amountÂ of slack before getting to the pull. Â The SA pull is light, but not crisp. Â For a production gun, the trigger isn’t bad, but I don’t much care for it.

Recoil is light. Â 9mm pistols are fairly easy shooters in all but the tiniest of handguns. Â Even so, good ergonomics help tame the recoil. Â I cannot imagine anyone seriously complaining about the light recoil of theÂ CZ P-07 Duty. 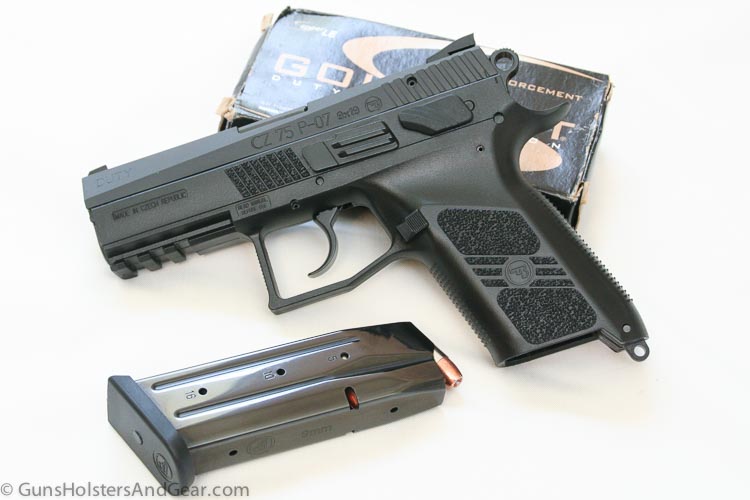 I’ve put hundreds of rounds through this pistol as part of a long term evaluation. Initial shooting was not done with a chronograph, but follow up range trips were done and velocities were recorded. Here is the data I collected:

The P-07 is a solid pistol and is definitely a good choice for anyone wanting a reliable handgun for self-defense or recreational shooting. Â MSRP is only $510, and that would seem to be a really good value.

Size is an obvious issue as the gun is nearly as large as other service pistols, yet retards ammunition performance by using an unnecessarily short barrel. Conversely, the gun is too bulky for most people to use as a CCW gun. 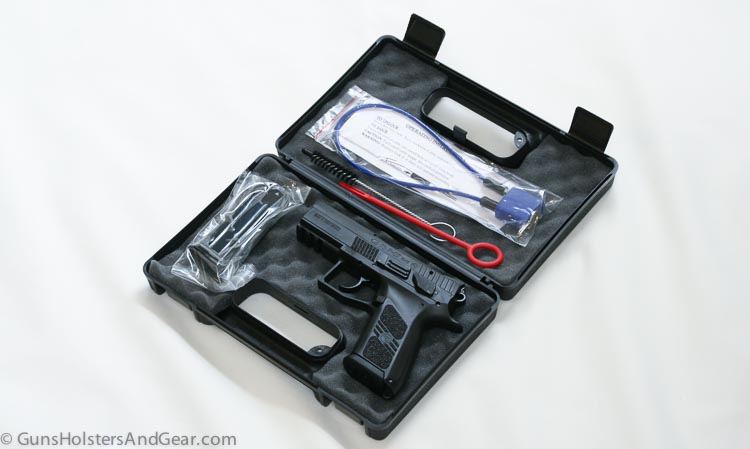 Personally, I’m not a huge fan of this pistol simply because of the trigger reach. Â However, there are a lot of people with longer fingers than mine who will have no problem at all with it. Â If the gun feels good in your hand, you will probably be very pleased with purchasing one. The price is right and the gun certainly seems reliable and accurate enough for any reasonable self-defense situation. 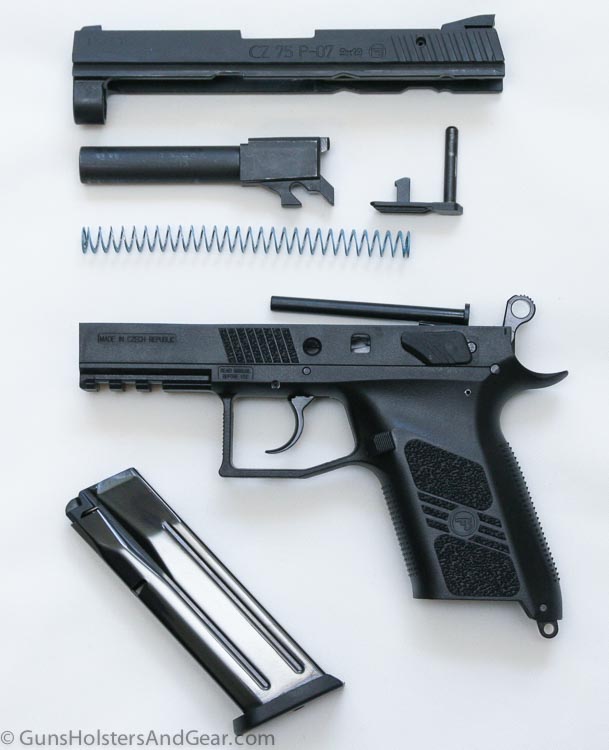 CZ-USA provided this pistol for review. No promises were demanded or provided to give the gun a “good” review. CZ/CZ-USA are not advertisers, nor have I ever talked to them about being one.

Overall a good review. I donâ€™t have big hands by any stretch but have no issue with reaching the trigger. Since I have and do, regularly carry the Beretta 92FS concealed as well as the full size Glock 17 or 22 (which I no longer own) carrying this concealed is easy and comfortable as well. For me. Every person is different. Two tenths of an inch in barrel length is not going to make a difference in performance. Individual barrels of the same length will show more difference than just a difference in 2/10s inch in length.

Thanks for taking the time to read my review and to post your thoughts. You are right about .2″ making little real world difference in ammunition performance.

However, for a law enforcement agency or military unit, this can make the P-07 Duty a non-starter due to the way requirements are written. I imagine a lot of sidearm bid requests list a specific barrel length such as 4″-4.5″. If so, this CZ is finished before making it to the starting line.

The good news for CZ fans is that since I wrote this review, the company introduced the P-09. The P-09 has a longer barrel (4.54″.) That should make it eligible for many places where the P-07’s shorter barrel would disqualify it.

Thank you again for taking the time to read and comment.