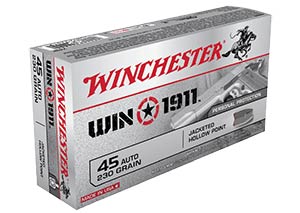 Winchester Ammunition announced they are now making a new line of .45 ACP ammo for the 1911 platform pistol. Â The WIN1911 ammunition will come in two variations: one uses a FMJ bullet, while the other uses a JHP. Â Both loads are designed to shoot to the same point of aim.

The FMJ load uses a flat nose bullet. Â Winchester claims the load is built for “high accuracy” and produces “precision groups.” Â Winchester does not identify the exact bullet used in the JHP load, so I would expect it is a traditional bullet rather than a highly-engineered bullet like the SXT.

Both of the ammunition loads are rated for 880 fps at the muzzle.

One of the interesting things about the WIN1911 line is that the bullets are nickel-plated. Â Winchester states this is for “easy identification.”

No MSRP has been announced.

I can appreciate having a practice round and self-defense round that share identical ballistics. Â But, beyond that, I don’t fully understand these new loads. Â A nickel-plated bullet doesn’t make a lot of sense to me, so maybe someone can help me out here. Â What, if any, advantages does a nickel-plated bullet (not case) offer? Â The “easy identification” doesn’t make much sense to me, as I don’t dump all of my ammo into a bag and store it loose. Â It stays in the box until I load it, so identification isn’t a problem.

“What, if any, advantages does a nickel-plated bullet (not case) offer?”

So often in life, when nothing else can explain a product decision, I would chalk it up to marketing.

“What are those nickel-plated bullets you’re shooting?”
“Oh, those are Winchester new 1911 ammo, available at retailers near you!”