The DeWalt 1AAT is a compact LED flashlight that throws a bright light for a reasonable price.Â  I recently had the chance to test one, and I was impressed.

I carried the 1AAT for two weeks as part of my normal attire.Â  I found the light to be very handy, and it concealed easily.Â  Using the included carry clip, the flashlight tended to ride up and off of my belt when sitting in a vehicle.Â  However, when I carried it in a front or back pocket in a manner similar to carrying a folding clip knife, I was happy to discover the 1AAT stayed in place and gave me no problems.

The 1AAT is rated at 66 lumens using a single “AA” battery and its CREE type LED.Â  To put it in perspective, I found the light to be about as bright as the Streamlight Strion, which is a compact, rechargeable flashlight made for law enforcement applications.Â  The light of the 1AAT is more white in color than the Strion, which uses a conventional incandescent bulb.Â  I did find that the DeWalt did not have as focused a beam as the Strion, so the center portion of the light was better with the Strion at longer distances.

For navigation at night, the 1AAT worked admirably.Â  Also, when doing some routine maintenance on my wife’s car, it proved to be very handy when working in the engine compartment.Â  Overall, I was very pleased with this flashlight.

The DeWalt 1AAT is compact, measuring only 4.25″ in length and weighing less than 2.5 ounces without the single battery.Â  To continue the comparison to the Strion,

The 1AAT uses the fairly standard DeWalt coloring: black body with yellow accent.Â  It immediately looks like a rugged DeWalt tool.Â  It may be the perfect match for the DeWalt AR-15.

The DeWalt flashlights have a three year warranty, and feature a 90 day money-back guarantee.

Highlights of the DeWalt 1AAT:

I think the DeWalt 1AAT is an excellent product depending on your needs.Â  While it is not as bright as some tactical flashlights of a similar size, it is bright enough for most applications and it is much more reasonably priced than some of the alternative flashlights on the market.Â  While the DeWalt is not my daily carry light, I would not feel at a disadvantage if I were using it in that capacity.Â  The 1AAT is certainly bright enough for identifying a target at handgun distances.

The DeWalt has found a home with my bug-out gear.Â  The fits nicely in with the rest of my bug-out equipment: it is lightweight, water resistant, reasonably powerful, and operates on commonly found batteries.Â  It works very well as a work and navigation light, and can work as a backup to a more powerful tactical light.Â  Plus it is reasonably priced, so I can afford to buy them for other members of my family too.

If you are in need of a small, bright flashlight that won’t break the bank, take a look at the 1AAT.Â  MSRP is $39.99, but Amazon is selling the 1AAT for about half of that.

Update: It is my understanding that these flashlights are no longer being made. You might be able to find one on the clearance shelf of some stores, but you are probably better off looking at another light. Take a look at the Streamlight 1 AA review I did here. The Streamlight is similarly priced and offers a slightly increased light output.

Also note that since these lights are no longer being made, that this flashlight is a very low priority for updating using my current flashlight testing protocols. 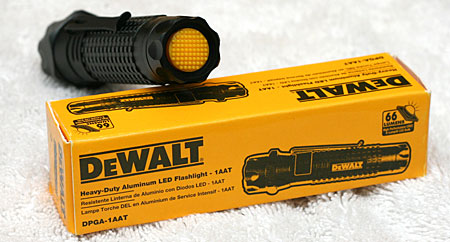