The DeWalt 3D flashlight is the largest flashlight in DeWalt’s recently introduced line-up of LED lights. The DeWalt line of LED flashlights are heavy duty aluminum torches designed for outdoor, construction, and industrial use.

I found this flashlight is rugged, inexpensive, and bright, and that works as advertised. While I have no doubt it makes an excellent construction light, I found it did very well in a law enforcement and home defense capacity.

The D-cells are obviously heavy, which means it is less easy to carry for long times as compared to lighter flashlights, but they also give the flashlight the heft needed to use it as an improvised impact weapon if needed. For someone keeping the light near the bedside for any nighttime intruders, having a heavy flashlight for close encounters may be appealing.

As many of you know, I am a full-time police officer with a Florida department. I carried the 3D flashlight on-duty for several weeks, and was very pleased with its performance. I found the DeWalt 3D to be brighter than the department issued MagCharger flashlights, the long-time standard flashlight in police work.

The DeWalt 3D had a tight focused beam in the center, with a large circle of light that gave very good illumination over a wide area. The CREE brand LED is bright, efficient, and throws a pleasent white light, rather than the yellow light associated with incandescent bulbs.

Using regular Duracell alkaline batteries, the flashlight remained very bright over the course of three weeks of use, with little loss of brightness. I would imagine that someone using the light around the house or as a night-stand light would get many months of use out of this light before changing the batteries would be required.

I carried the 3D in a standard D-ring flashlight ring. When in the patrol car, I would jam the light between my gear bag and seat, or sometimes down between the driver’s seat and transmission hump. The black anodized aluminum body did not show any signs of wear from the ring or from use during the weeks I had the light. Frankly, the finish on the DeWalt flashlight held up better than most other flashlights I have used.

But, the finish is not the only thing tough about the DeWalt. All of the DeWalt LED flashlights were put through a variety of torture tests including a 25′ drop test, freeze test, 36 hour corrosion test, a 45 minute tumble test, and independant testing for light output by Lighting Sciences, Inc.

Click here to get your DeWalt 3D LED flashlight from Amazon. 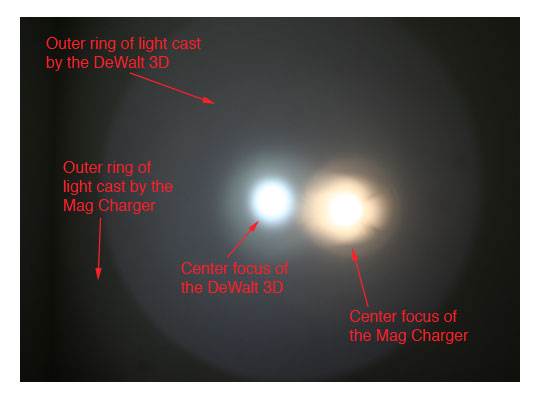