Gun oils:Â  there are good ones and bad ones, but most get the job done pretty well.Â  Iâ€™ve informally experimented with different brands throughout the years and have found my favorites, but never thought that any of them have really made a huge difference in the reliability or protection of my guns.

I was recently contacted by Rand Brands about a new gun product they have called the RAND CLP.Â  After giving me the run down on the product, they asked if they could ship me some samples for review.Â  I agreed.

There are essentially three functions of a CLP:Â  cleaning, lubing and protecting against corrosion.Â  In this review, I evaluated theÂ  product on the first two:Â  cleaning and lubing.Â  Read down to the end of the article to hear about my upcoming test on corrosion protection.

Rand makes several significant claims about the oil.Â  Before getting into the details of my review, it might be a good idea to cover these points to help you determine if the RAND CLP is something you might be interested in.

First, the new CLP is non-toxic and biodegradable.Â  It has no odor and you can use the oil without gloves or any kind of protective gear.Â  While Iâ€™ve never used rubber gloves when applying Hoppes #9 to a gun, I do have to admit that the stuff is probably pretty harsh on the skin and is not something I would want to accidentally ingest. 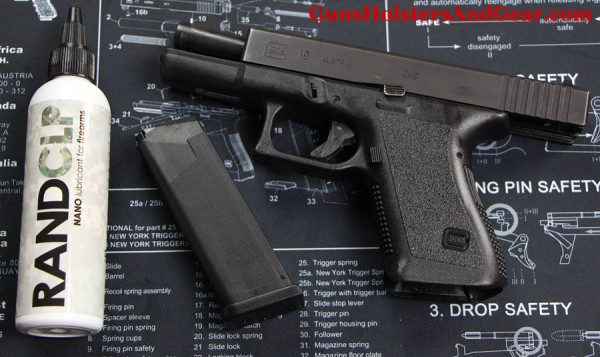 Second, the RAND CLP combines vegetable oil with a proprietary blend of nanoparticles which gives it lubricity the company claims beats other competing products.Â  One of the nanoparticles used is boron, which is supposed to have properties which pull heat away from metal.Â  So, in theory, this CLP could reduce the operating temperature of the gun.Â  By how much, I donâ€™t know, but it is an interesting property.

Thatâ€™s all well and good, but how does it actually perform?

How Well Does It Clean?

I evaluated the cleaning properties of the RAND CLP on a Glock 19 twice.Â  The first cleaning test was on the Glock after the gun had run about 350 rounds through a one-day Fundamentals of Combat Focus Shooting course taught by Deryck Poole of Echo-5 Training Group.Â  Prior to the training, the Glock had been lightly lubed with Break Free CLP, but the gun was mostly dry.

The gun was dirtier than I had expected for the round count, which is probably because of the cheaper ammo I was shooting.Â  In this market, you shoot what you can find.

I applied the CLP using cloth patches to all areas of the pistol.Â  The CLP was noticeably thicker than Break Free CLP and other gun oils, but it was not gummy or sticky.Â  Gunk and debris on the pistol wiped away pretty easily.

Build up on the feed ramp and in the barrel was a little tougher to remove, but this is normal for every cleaner I have used.Â  I applied a little extra CLP to these areas and let it penetrate for three to four minutes.Â  The feed ramp wiped clean with just a little bit of extra pressure.Â  The bore cleaned very well using alternating dry and CLP soaked patches.

Overall, I was pleased with the RAND CLP cleaning performance.

One thing that this product clearly beats traditional cleaning supplies at is the lack of noxious odors.Â  That is to say the Rand product has none.Â  If you are sensitive to smells (or your significant other is), you should definitely check out this product.

After cleaning the Glock, I applied a liberal coat of the oil to all metal parts of the gun and let it sit for a while.Â  Rand suggests pre-treating a gun prior to storage and to make future cleanings easier.

A few days later, I carried the same pistol out to the range for some shooting.Â  In this range session, I put about 250 rounds through the pistol.Â  The majority of the ammo (200+ rounds) was reloaded by a local dealer and it shoots pretty dirty.

When I broke the gun down for cleaning, the Glock was as dirty as I would expect.Â  However, cleaning was easier than I was used to.Â  Iâ€™m not about to say that carbon flowed off the pistol like hot butter off an ear of corn, but it was definitely easier.

Most areas only needed to be wiped down with a CLP soaked patch.Â  The feed ramp and barrel took a little more effort, but did not need any penetrating time on this cleaning.Â  Rand claims that cleaning becomes â€œquicker and easier each time,â€ and I am inclined to believe it.Â  I noticed an improvement between the first and second cleanings.

The second function of a CLP is lubrication.Â  Lubrication is important to keep a gun running by reducing friction between metal parts.Â  Measuring lubrication is beyond my capabilities since I donâ€™t have a lab or the necessary testing equipment on hand.

I can tell say two things about the lubrication of the RAND CLP though.Â  First, the gun ran flawlessly after being lubed with the product.Â  I rarely have problems with my Glock, so I canâ€™t say the Rand product had anything to do with that, but it did not introduce any problems into the system. 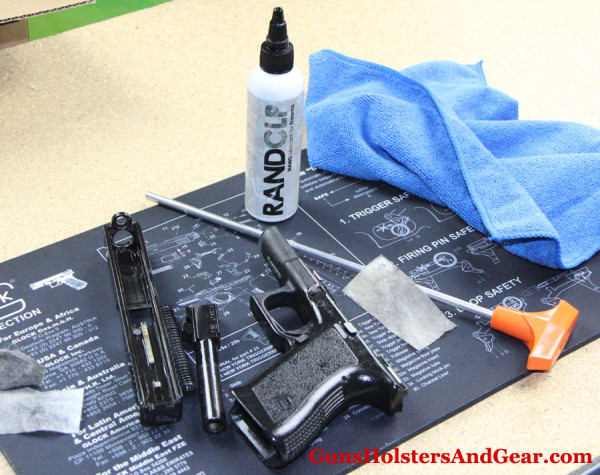 Secondly, and this is very subjective, the slide seemed to operate much smoother on the rails.Â  When I worked the slide on an empty gun, it felt slicker.Â  Is it?Â  I canâ€™t say one way or another, I can only tell you what I felt.

The literature that Rand provided me stated the CLP has the â€œlowest coefficient of friction on recordâ€ when compared to other products on the market.Â  This would suggest that my impressions are accurate.

The final performance aspect of any CLP is how well it protects metal against corrosion.Â  There are a variety of informal tests on the internet using different gun oils.Â  While many of them have done a good job with limited resources, I am taking this to the next level.

I am assembling an experiment to test a variety of CLP and gun oil products that I believe will be more comprehensive than prior testing.Â  I will be using higher grade metals and more carefully control for variables in the process.Â  The RAND CLP will be one of the tested oils.Â  Look for this in the coming month. 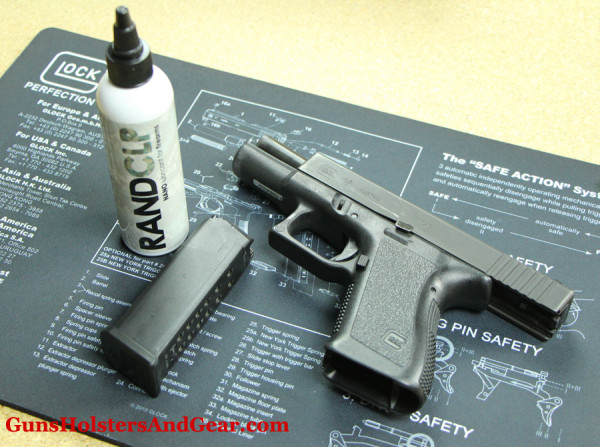 I like the RAND CLP for a variety of reasons.Â  It cleans well and does so without any kind of odor.Â  It also gets easier with each cleaning, apparently because of the way the oil interacts with the metal to form a bond.

I am eager to get the protection testing underway and see how well the Rand product performs.Â  Until now, Iâ€™ve been pretty well served by Hoppes and Break Free.Â  However, I will be using the RAND CLP on several of my guns for the next few months to see how it continues to perform.Â  If performance holds, I believe I will be replacing my stocks of Break Free.Â  I will post a follow up RAND CLP review in a few months to give you my final take on this product.