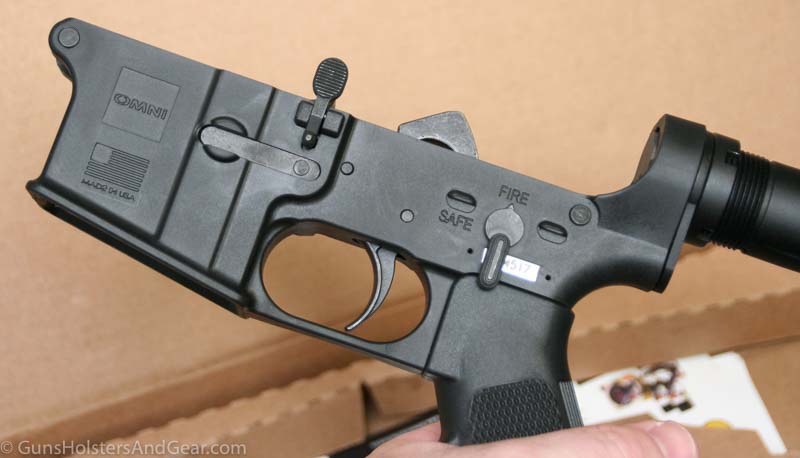 Looking for a low-cost, lightweight reciever for your AR-15 build?Â  If you are not afraid of trying a polymer lower, give the Omni AR-15 from American Tactical Imports a look.

The ATI Omni is a polymer lower for the AR-15.Â  It is designed to be compatible with all mil-spec uppers and parts.Â  You can mount virtually any stock or pistol grip, and most if not all magazines should work fine with it.

The receiver is designed to work with .223 Rem, 5.56 NATO, .22 LR and .410 bore calibers.Â  Although it would probably run something larger, like a 6.8 SPC or .300 BLK, the lower is not rated for those calibers.Â  I imagine like anything, the heavier you go, the shorter the lifespan.

The stock on the complete lower is a M-4 type adjustable, and the pistol grip is a standard-style grip.

A couple of weeks ago, I unboxed and gave you my initial impressions on the lower.Â  My first impression was a bit mixed, as the assembled lower I received had a few quirks out-of-the-box (scroll to the bottom of this review to see my original post on the lower.) Â First, the uppers were not mounting properly to the lower.Â  Second, magazines were not dropping free from the mag well.Â  Lastly, the bolt release was not working smoothly.Â  Iâ€™m happy to say that all of the problems were resolved by then end of this testing, but Iâ€™m sure you would like to know how they played out.

I had two 5.56 uppers I tried with the ATI lower.Â  One was a Rock River and the other was a Del Ton.Â  Both uppers were very tight fits on the lower, and initially, I could not get the rear take down pin to fully seat.Â  This was concerning, of course.

After eyeballing the lower it appeared that there was a little extra plastic material at the rear of the lower, near the buffer tube assembly.Â  With a very careful and slight amount of force, I was able to grind a portion of the excess material down, which allowed both uppers to fit perfectly.

Interestingly, this seemed to fix the bolt catch problem as well.Â  So, two of three problems solved. 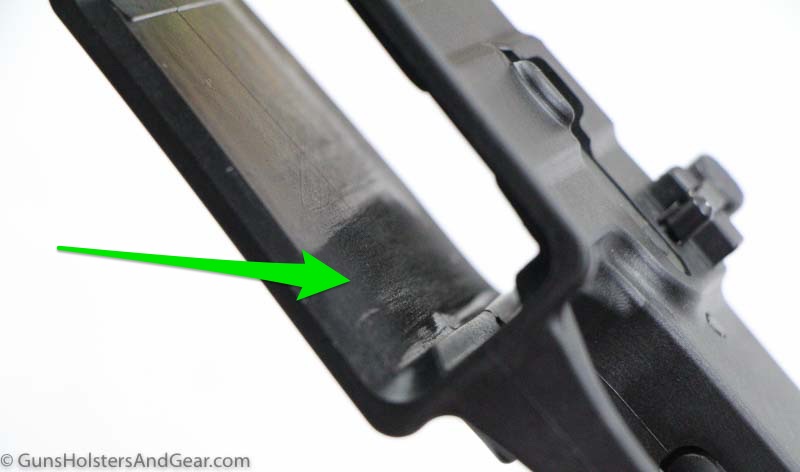 The magazines continued to stick in the well, though they became more likely to drop free as time went on.Â  The more use, the more wear on the well – so I figured like the prior issue, there was just a little too much plastic.Â  Once worn down, the magazines dropped out of the gun correctly.

At the range, I shot both 5.56 uppers on the lower with a variety of 55 grain FMJ ammo from Federal and Remington.Â  Both uppers turned in acceptable accuracy at 50 yards (a longer range was not available at the time of testing.)Â  With this ammo, there was no obvious performance difference between it and the aluminum lowers the uppers were originally mounted on. 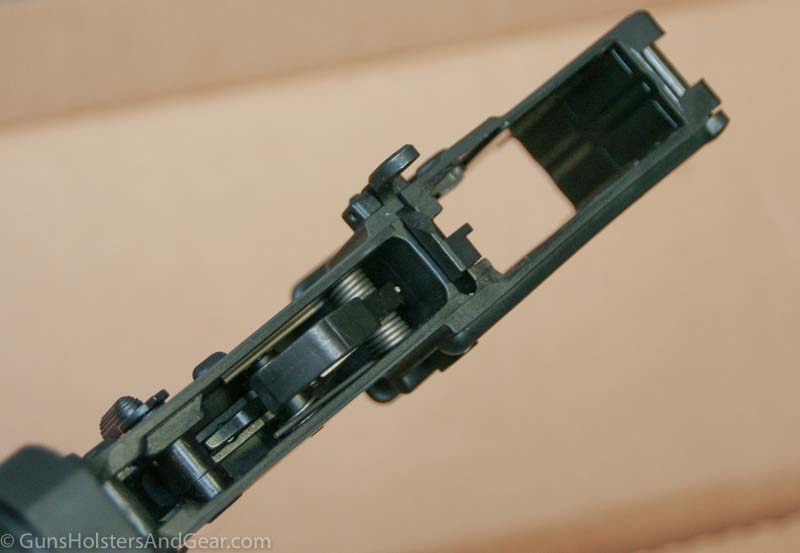 I did not encounter any problems with the lower, and it did not loosen up or get sloppy after firing several hundred rounds through it.Â  One of my concerns was that the polymer might get a little loose, but I saw no evidence of that whatsoever.

The trigger was pretty good:Â  crisper and lighter than the one on my Rock River, actually.Â  For the money, I think most people would do very well to buy the completed lower instead of the stripped.

As I stated when this lower was announced several months ago, the very affordable pricing on these lowers will help to put more AR-15 rifles into the hands of the shooting public.Â  I think they are certainly up to the kind of shooting that 95% of people do, and can probably handle a lot more than that. 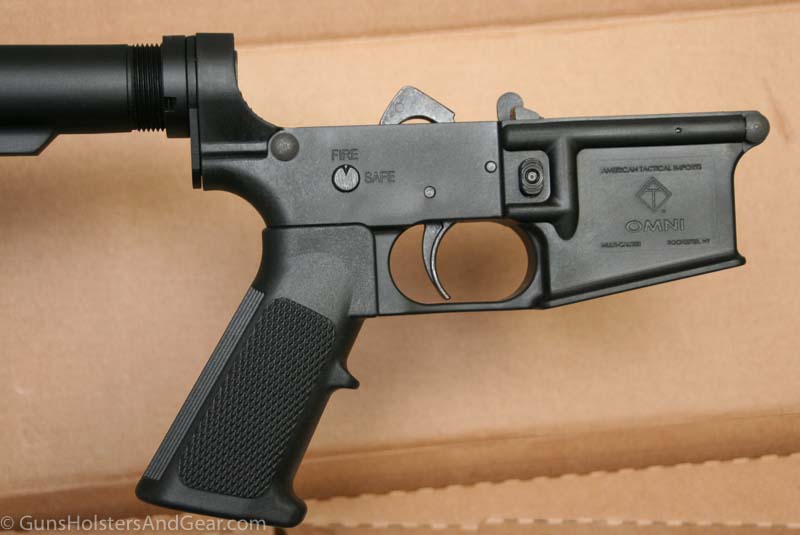 MSRP on a stripped lower is only $49.95 while a complete lower is a mere $129.95.Â  With an inexpensive assembled upper, a shooter could have a brand-new, fully functioning AR carbine for less than $600.

I did encounter several small problems out of the box, but all of them were simple fixes.Â  Since I got an early production model, I expect that all of the quality control issues will be worked out by the end of the year.Â  But, for the price, I donâ€™t mind adding a little finishing work to the product.Â  Your mileage, as they say, may vary.

I picked up a new ATI Omni AR15 polymer lower from by gun dealer yesterday, and I have some thoughts I want to share before I even head to the range. Â Above is a video of the unboxing and myÂ initialÂ observations and concerns. Â Below, I have more information and photos.

Mating an upper and lower has never been a problem for me – well, before now. Â I have several AR15 rifles in my safe and have access to dozens more at work. Â Regardless of manufacturer, I’ve always been able to swap uppers and lowers without any difficulty. Â This ATI Omni polymer lower is the first time I have ever run into any fitting problems.

I next attempted to mount a Rock River 5.56 upper to the Omni lower. Â This time I had a little more success. Â I was able to get both halves to align (mostly), but the rear takedown pin never would completely seat. Â I’m not certain, but I believe the measurements on the lower are a little on the small size, and the rear pin is angled ever-so-slightly to prevent it from going straight through.

Before I take this onto the range, I will have to solve this problem. Â I don’t plan on trying to shoot a rifle with one of the pins not properly seated.

If you watch the video, you will see me have two magazine-related problems with the lower: Â the mag well and the magazine release button. Â I tried multiple magazines with the ATI Omni lower: Â Brownells, Magpul, Tapco, EMA, Tango Down and some other generic metal mags. Â Some of them would not drop free, even when weighted down with loaded rounds. Â I suspect that with repeated use, the interior walls of the magazine well would wear down and the mags would all drop free.

The magazine release button wouldÂ occasionallyÂ be extremely difficult to depress. Â You also see that on the video. Â I’m not sure on what may be causing that. Â Needless to say, it is an annoying issue.

The standard bolt release, like the magazine release button, is a bit tough to operate. Â Hitting it with your thumb isn’t always enough, and it sometimes takes multiple palm strikes to get the job done. Â Is this a problem of the upper and lower not matching perfectly? Â Maybe. Â I hope to figure it out.

Depending on my schedule, I hope to get to the range next week with the ATI Omni AR15 polymer lower. Â Maybe I can get a few of these problems worked out after a few hundred rounds of 5.56. Â We will definitely see!