Few things beat a revolver for ruggedness and reliability. Â But, they are complex machines and bad ones are often worthless junk. Â You have to buy a quality revolver to obtain the legendary reliability most are known for. Â In thisÂ Charter Arms Off Duty review, I will tackle the questions: Â Is this a good revolver? Â Is this gun better than a Smith & Wesson revolver? Â Read on…the answers may surprise you. 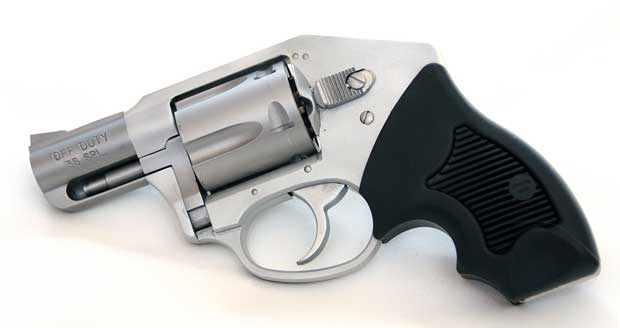 Charter Arms has been making handguns since 1964. Â Although the company is probably most famous for the .44 Special Bulldog, the company started with The Undercover, a .38 Special revolver. Â The company, like many, has been through its ups and downs, but has never given up on making .38 revolvers. Â The Off Duty is one such .38.

The Off Duty is a “hammerless” revolver, which is a bit of a misnomer. Â The gun definitely has a hammer, but it is completely hidden inside of the firearm. Â This style of gun must therefore be double action only (there is no external hammer to cock) and the gun does not have as many things to impede a smooth draw from concealment. Â If you like to cock your gun, but still limit the possibility of the gun snagging on anything, check out the On Duty revolver. Â It has a partially shrouded hammer that still allows the shooter to cock the gun. 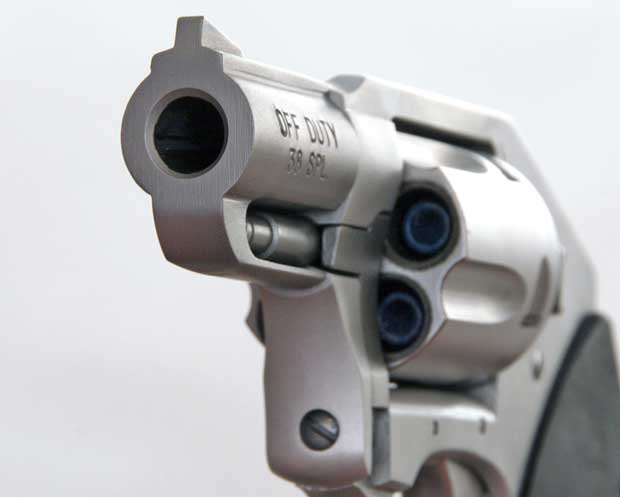 The Off Duty is light: roughly 12 ounces unloaded. Â The gun is also compact with a 2″ barrel and holding only five rounds of .38 Special ammo.

Unlike some other snub nose revolvers, the Charter Arms Off Duty has a full length underbarrel lug which serves as a shroud for the ejector rod. Â If bent, the rod may not eject spent cases. Â The Off Duty’s shroud helps protect the ejector rod from damage.

Let me start by saying that during this Charter Arms Off Duty review, the gunÂ was completely reliable with every load I ran through it. Â I shot standard pressure and +P loads (all factory stuff) and everything worked properly. 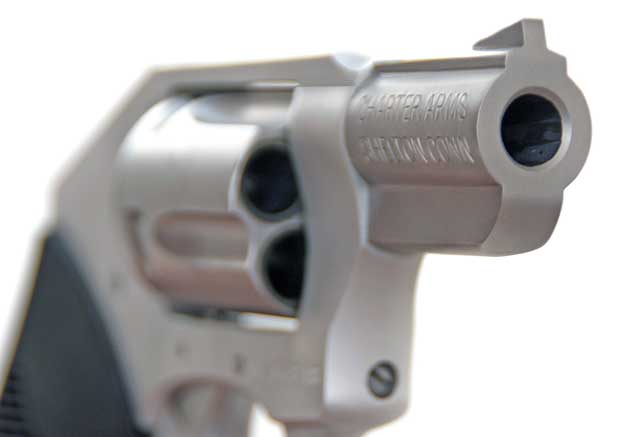 Shooting the lightweight revolver wasn’t as punishing as I had expected. Â Many times when shooting a small gun, especially with hot loads, the recoil can be less than enjoyable. Â Surprisingly this wasn’t the case with the Off Duty. Â Recoil was definitely more than that with a 4″ K-frame, but it wasn’t bad.

I believe the mild recoil was largely due to the grips used by Charter Arms. Â They are a hard rubber and do a very good job of filling the hand. Â They seem a little thicker than the boot grips found on some other guns, and seemed to more evenly distribute the recoil impulse across a larger area. Â I wonder if the felt recoil would be even less if the grips were made of a softer rubber.

The sights were easy to use; in fact, they were much more visible than what I am used to on other snub nose revolvers.

Accuracy was good. Â Hitting a man-sized target at 15 yards is not difficult with this gun. Â But, I believe it could be improved with a better trigger.

Out of the box, the Off Duty’s trigger was heavy and gritty. Â As I dry fired the gun, and then later shot it on the range, the pull did improve. Â It got a lot smoother and seemed to lighten up a bit. Â It was still a very heavy pull, and would never qualify as “smooth,” but it was certainly useable.

I started off the review with two questions. Â I believe I have now have answers for both.

Is this a good revolver? Â While very much a subjective question, I believe the answer is yes. Â The Off Duty seems to be well made, it is light and concealable, and it functioned with 100% reliability. Â I found nothing in my evaluation that would cause me to believe that it is not a good handgun. 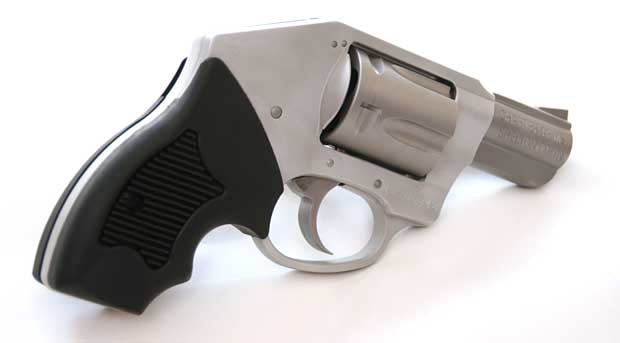 It may not be the best handgun, or even the best revolver, for all circumstances. Â The gun is better suited for concealed carry than for recreational or target shooting, for example. Â But for the niche it fills, it is a good gun to have.

Is this better than a Smith & Wesson revolver? Â Ah, now we really get into the subjective with this answer. Â For many people, including myself, Smith & Wesson is the gold standard in double action revolvers. Â If we ignore the trigger locks found on most of the modern revolvers, the current line of S&W wheel guns is excellent.

Probably the closest model to compare to the Off Duty is the S&W 642. Â Both are aluminum frame, hammerless, .38 Special revolvers. Â Both have suggested retail prices that are close ($411 vs. $459.) Â Fortunately, I have owned a pre-lock 642 for almost 20 years, so I believe I can talk with some authority on the gun.

Is the Off Duty better than the 642? Â Yes. And no. Â There are some things that I definitely like better in one over the other. Â For example, I think the fixed sights on the Off Duty are easier to see and use than those on the 642. Â Also, the grip of the Off Duty fills my hand better than the standard boot grip on the Smith & Wesson. Â The Charter Arms gun also has a full barrel shroud which protects the ejector rod. Â Lastly, the placement of the cylinder release on the Charter is slightly different than on the 642. Â The 642 eats into the top of my thumb knuckle when shooting, and the Off Duty does not. 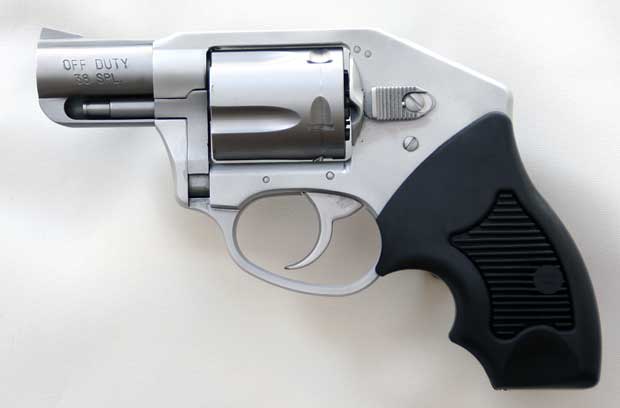 But, that isn’t to say the Smith & Wesson doesn’t best the Off Duty in other areas. Â The most obvious is the that the 642 has a vastly smoother trigger out of the box. Â The Off Duty’s trigger did smooth out, but it still wasn’t as nice as the Smith’s. Â Also, the S&W’s ejector rod, though shorter than the Off Duty, functioned much more smoothly. Â Overall, the S&W has a much nicer fit & finish to the gun. Â It just feels like a higher-quality gun.

So, is the Off Duty better than the Smith & Wesson? Â In some ways yes, in other ways no. Â It certainly holds its own against a classic revolver, and that is no small feat. 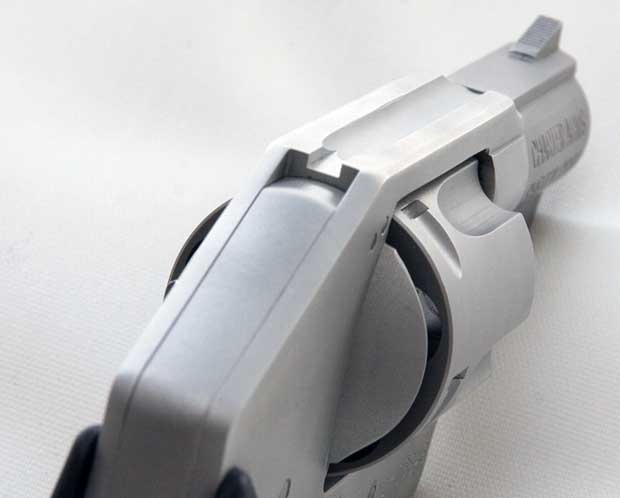 In this Charter Arms Off Duty review, I give the gun a solid thumbs up. Â It will get the job done, and at a reasonable price to boot. You can click here to buy one from Brownells.