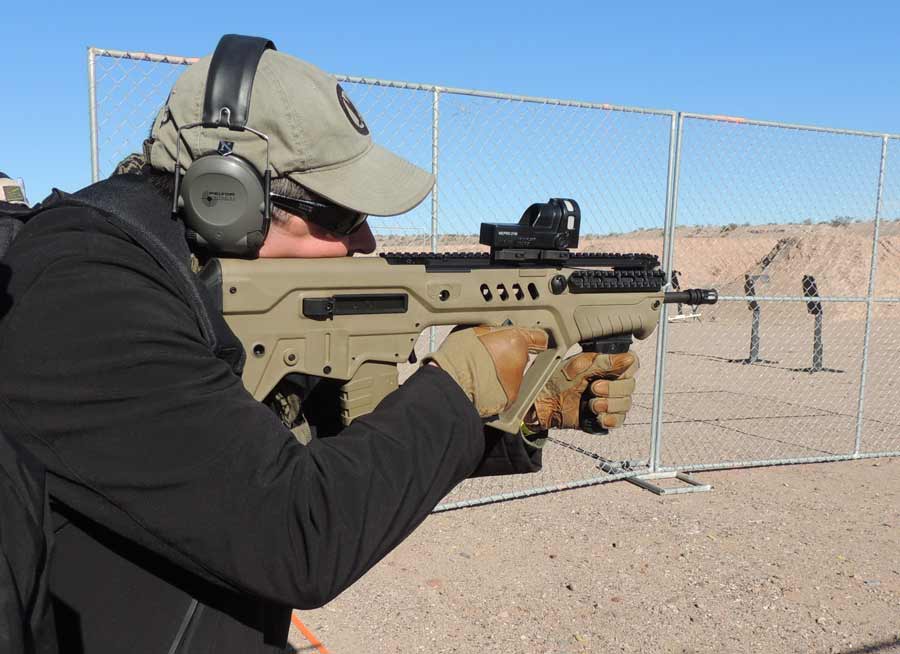 The Isreal Weapon Industries (IWI) Tavor was on show at Media Day and I couldn’t resist putting some rounds down range with this interesting rifle.  Particularly developed for the Isreali military, the IWI Tavor is being released in a civilian package as well.  The Tavor is chambered in 5.56mm, which has become a hugely popular cartridge in America and elsewhere.  The particular model I shot was the Tavor Flattop version with a Flat Dark Earth composite receiver.

The design concept behind the Tavor is very similar to the Steyr AUG, in that the bolt, firing mechanism, and magazine well are all in the stock at the rear of the rifle.  Some may go as far as calling the Tavor an AUG clone, but will be available for almost half the price of the AUG.  Brad Howard, of IWI, explained that this design was purposefully implemented to provide shooters the added benefit of a weapon system that does not burden the shooter with the center of its weight out away from the body.  This makes sense in many military applications, but also has potential for personal defense as well. 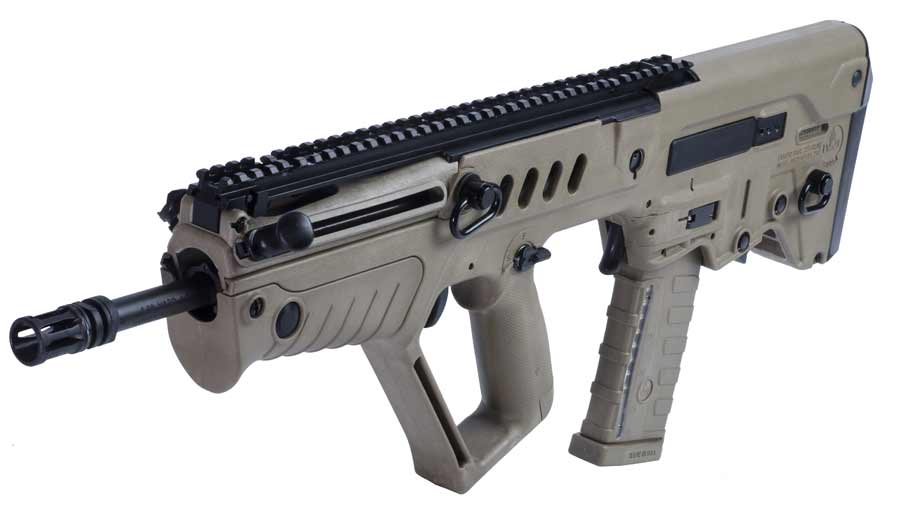 With the majority of the weight tucked nice and tightly against the shooter’s body, maintaining a strong shooting platform was made incredibly easy.  The shooter does not feel that constant pull of a heavy weight out where the arm and shoulder muscles must strain to bear it.  The Tavor creates a feeling that holding the rifle is simply a natural extension of the arms.  With the weight issue behind them, the shooter is free to concentrate on aim and other shooting fundamentals.  When I was done shooting I didn’t feel any strain in my arms or shoulders.

Another great feature of this rifle is that a left-handed shooter does not have to purchase a specially made rifle.  Almost all of the Tavor’s firing mechanisms are interchangeable.  The fire selection controls (“fire” and “safe” in civilian models), ejection port, and charging handle can all be moved to accommodate a left-handed shooter.  The bolt release lever is located on the bottom of the stock making it ambidextrous already.  The bolt is the only non-interchangeable element, but is designed to work with either configuration.

So how good was it?  Good enough to flip the steel “popper” from side to side at about 25 yards using a standing, unsupported position, with surprisingly little effort.  The recoil is similar to other 5.56mm platforms in impact, but the muzzle rise didn’t seem to be as noticeable.  That could be a result of the shooter only having to pull the rifle back, without having to fight gravity with a lot of weight away from the body.  The trigger pull is very smooth and breaks very nicely.  The trigger reset is short and crisp with a positive reference point that can be felt on the trigger finger.

Another benefit of having the center of weight in the stock, is that it allows for easy magazine changes.  There is a magazine release lever in front of the magazine well.  With the rifle already nicely secured in the shoulder, the shooter can simply rotate the rifle inward slightly where manipulation of the magazine is easy.  I suppose that the shooter would not even have to make the slight rotation, but it does open things up a little better.  Although keeping the butt stock in your shoulder on AR-15 platforms during magazine changes can be done, it is much more awkward and heavy – especially ones with aluminum rails, and all the accessories.

In a military or law enforcement setting the Tavor’s weight distribution also allows for a very easily controlled one-handed shooting while still maintaining the rifle in the shoulder shooting position.  The shooter then can use their support hand for other mission critical needs like dragging a friend to safety, retrieving other equipment or opening doors, etc.

In addition to the 5.56mm rifle platform, Howard stated the Tavor is going to be available to convert to 9mm and 5.45mm as well.  Howard advised that the Tavor should be ready to ship during the first quarter of 2013. 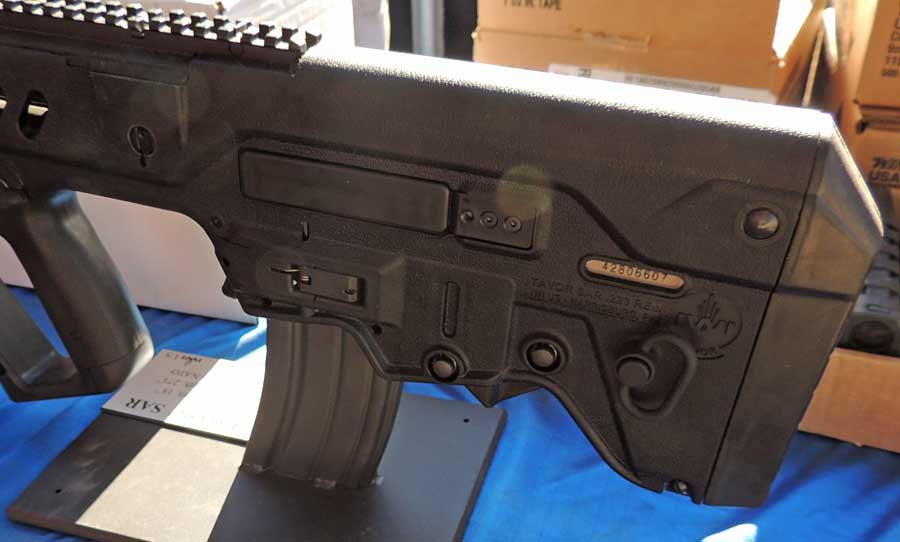 Here are some of the other features of the Tavor that you should find appealing:

Howard seemed confident that IWI had worked out the proper details to import the Tavor (semi-auto civilian version), but with recent national developments it will be interesting to see how the Tavor will fit into the overall picture. You can buy a Tavor immediately from Brownells by clicking here. 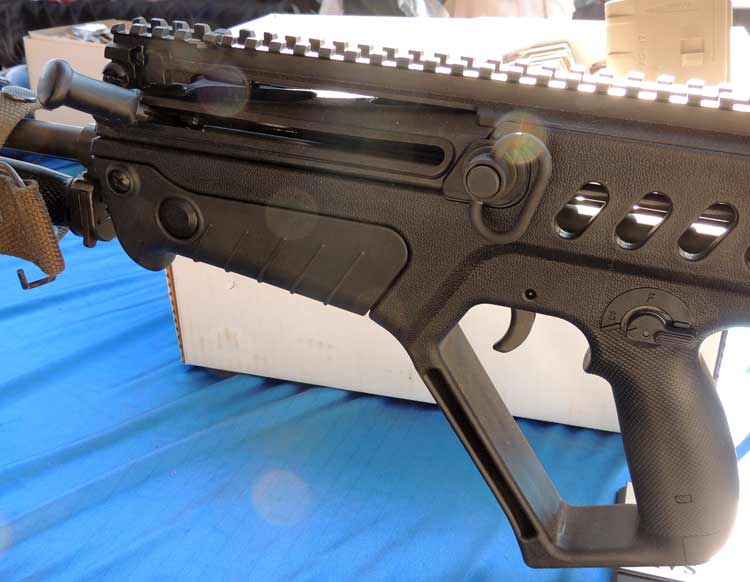 Update – Since this first look at the SAR, IWI US began selling the newer X95 to the shooting public. You can check out my IWI X95 review by clicking here.