(Ed. note: Make sure you scroll all the way down to see all of the photos and videos in this Springfield XD-S 45 Review)

Media Day 2012 brought a lot of familiar faces along with several newcomers. One of the regulars was Springfield, a firearms company with a long history of fine craftsmanship and innovative designs. This year I got the chance to handle and shoot the new Springfield XD-S, a compact single-stack .45 ACP pistol.

In the latest and hottest trend to hit the handgun industry, Springfield presents a compact and sleek handgun, delivering a powerful man-stopping punch, with all the same features as its bigger brothers in the XD series.

At a casual glance, the XD-S 45 appears to be a â€œminiâ€ XD pistol. One significant difference however is the single stack magazine that allows this handgun to truly fit into tight spaces.

The Slide and Barrel

Like all XD versions the Springfield XD-S 45 has a forged steel slide. The is coated with a Melonite finish, which involves being bathed in a salt bath nitriding process. The barrel has a fully supported ramp and also has the Melonite finish. This process does way more than provide good looks, as it â€œleaves a deep, penetrating finish that protects against corrosionâ€.

Like other XD models, the XD-S has a loaded chamber indicator on the top of the slide. When there is a cartridge in the chamber the indicator (about a 1â€ long and 1/8â€ wide metal strip) extends slightly upward making it easy for the shooter to confirm the firearmâ€™s loaded status through look or touch.

At the rear of the slide the Springfield XD-S 45 has (6) slightly rounded serrations that allow for a sure grip while reducing the chance for the serrations to snag on gear or clothing.

The XD-S 45 has polymer frame that has the same look and feel as the bigger guns in the XD series. There is a single position Picatinny rail system under the barrel at the front of the frame, allowing shooters to accessorize with lights or lasers.

The XD-S has a similarly modified contour of the XD(M) series which should allow most shooters the ability to reach the magazine release without making gross adjustments of the gun. The grip has an aggressive â€œall-terrainâ€ texture to provide the shooter with confidence when shooting, however it may be a bit rough for some.

The XD-S also comes with â€œMould-Truâ€ interchangeable back straps, allowing shooters to form fit the grip to their liking. This could definitely come in handy for a handgun firing .45 ACP. 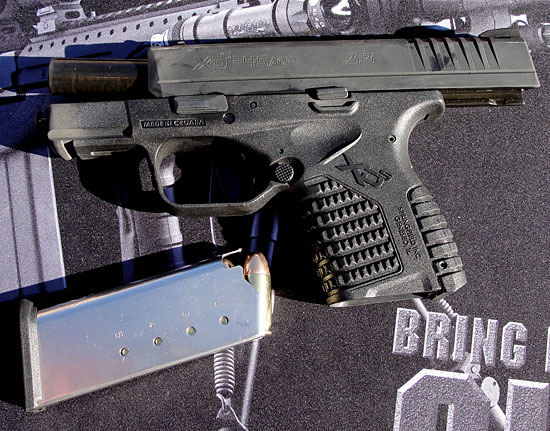 Springfield XD series handguns have two safeties – the Ultra Assurance (USA) Trigger System, a Grip Safety. The XD-S 45 has these same features, but also includes a â€œFail-Safe Disassemblyâ€ safety. With this new safety, the disassembly lever cannot be manipulated with a magazine still inserted into the pistol. Also, a magazine cannot be inserted into the pistol when the disassembly lever is in the up position.

The USA Trigger System locks the trigger in place and prevents accidental discharge from dropping or bumping the firearm. This trigger safety is similar to the Glock trigger safety, in that it appears to be a second trigger extending out in front of the actual trigger. To disengage the safety the shooter must depress the safety, which then unlocks the trigger for firing.

The Grip Safety is similar to the Model 1911 safety system. With this safety, the XD series pistols will not fire unless the shooter has a firm grip on the pistol. These safeties actually work with and for the shooter during the firing process to ensure that the handgun is safe until shooting is desired. Itâ€™s nice to see Springfield keep these features on their compact pistol, when trimming size sometimes means limiting features.

The Springfield XD-S 45 is a double-action only pistol with a very smooth trigger pull. I was unable to get the exact pound measurement for the trigger pull, but I would guess it to be between 5-6 lbs. I can say that the XD-S trigger is smooth and consistent, and includes a short reset for follow-up shots. The reset is audible and tactile, so the shooter knows when the trigger is reset and ready to fire again. Shooters who train themselves in proper trigger reset shooting (maintaining the finger on the trigger at all times) will be able to easily make accurate follow-up shots with the XD-S.

At Media Day I made a rapid double tap (trigger reset) shot on steel from about 15 yards with no problems.

The XD-S 45 has a 3-dot sight system, but is unique in several ways. First, the front sight is a red fiber optic sight housed in a steel frame. The rear sight is a Dovetail design with two white dots. Both sights are low-profile to reduce the potential for the sights to snag on gear or clothing. 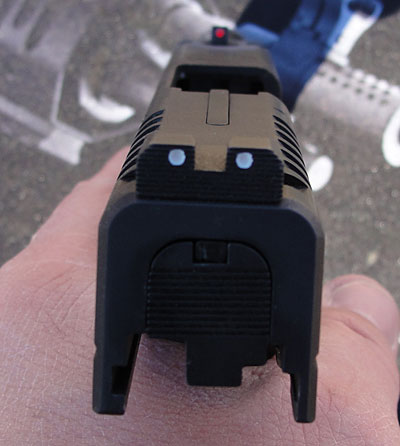 Iâ€™ll admit that when I saw the size of the XD-S 45 I braced myself for a punishing test fire session. I own a full-size .45 ACP handgun and have shot several .45 handguns. They are all impressive with the power of their shot, and the resulting recoil. Being confined to such a small frame, the XD-S appeared to have the makings of a wrist breaker! Â But, for the purposes of this Springfield XD-s 45 review, I pulled on my big boy pants and grabbed the pistol.

In reality, the XD-S was incredibly comfortable to shoot. I never felt like the small compact frame was in danger of dislodging from my grip. In fact, I felt so comfortable with the recoil and trigger reset that I successfully shot a rapid fire double tap on steel at 15 yards. The XD-S was very fun to shoot, and accurate to boot.

The only real negative during shooting was that the aggressive texture of the grip let me know that it was there. Despite this one drawback, Springfield has a real winner

in the compact pistol arena. With a â€œpocketâ€ pistol that can deliver 5+1 rounds of .45 ACP, it looks like shooters can have their cake and eat it too!

Needless to say I was very impressed with the Springfield XD-S 45 and hope to add one to my collections soon. Â I hope this review has been helpful. Â Please leave any questions or comments in the section below.

Update: Â A recall on all XD-S pistols was announced. Â Click here for the recall information.