While he’s no Chuck Norris, outdoor survival expert Bear Grylls has still amassed his share of tough-guy jokes. Â In thisÂ Bear Grylls Knife review, I wanted to know if this was just another joke or a serious blade.

This survival knife was developed by Gerber with input from Grylls, and bears distinctive orange, gray and black styling. Â For those not familiar, Grylls is considered a wilderness survival expert with experience in mountain climbing, parachuting and even time in the British SAS (21 Special Air Service Regiment). Â Most people know Grylls for the wildreness survival TV shows he has starred in. 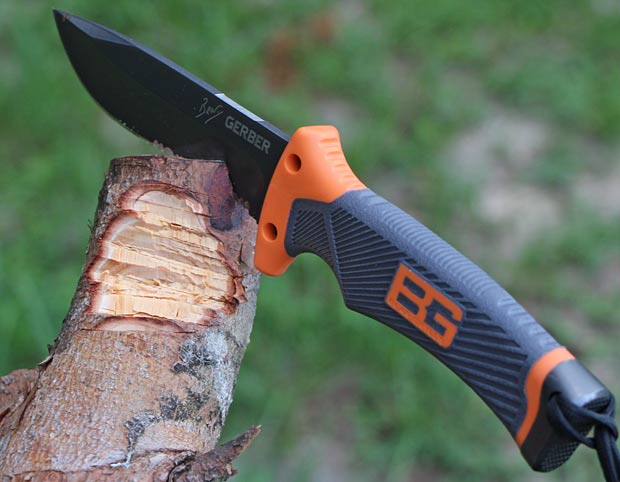 The Bear Grylls Ultimate knife is a fixed blade knife that is marketed as a survival knife. Â Made in China, the knife usesÂ 7Cr17MoV stainless steel and has a 3/4 tang. Â In thisÂ Bear Grylls Knife review, I had a knife with a partially serrated blade. Â A fine-edged blade without any serrations is also available. 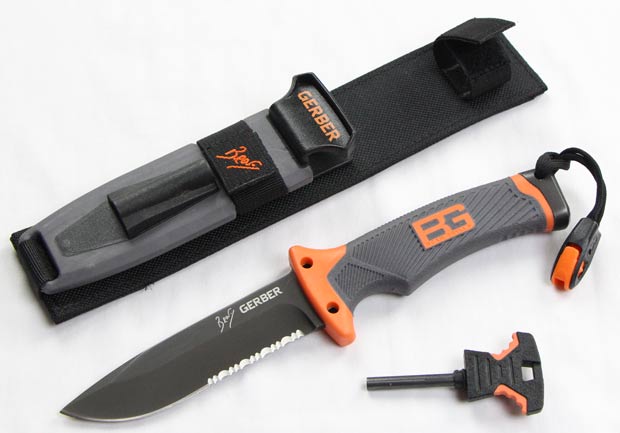 The knife has aÂ rubberized handle. Â Adding to the survival nature of the knife is a whistle that is part of the lanyard and a small, foldable guide that tucks into the back of the nylon sheath.

At the butt-end of the knife is a textured metal end cap. Â This is designed for hammering, be it a stake into the ground or breaking open a nut.

The knife blade locks into a plastic sleeve that is part of the nylon sheath. Â Friction holds the knife into place. Â On the back side of the plastic sleeve is a diamond stone for sharpening the knife. 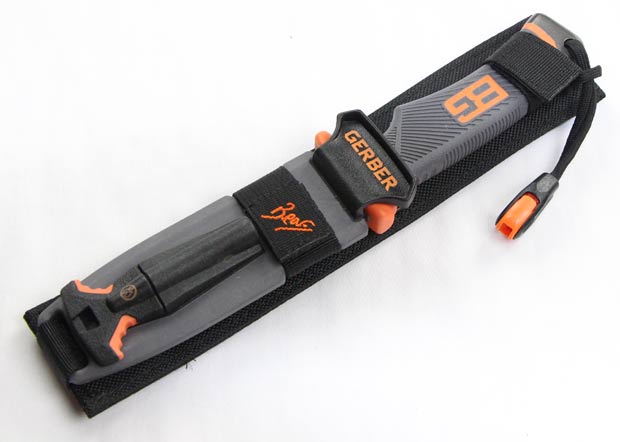 A fire starting rod is attached to the bottom of the plastic sleeve. Â On the blade’s spine is a notch that is designed to strike the rod to produce sparks for fire starting.

Bear Grylls Knife in the Field

All the features in the world don’t mean a thing if the knife fails to perform in the field. Â That was where my main interest lie when doing thisÂ Bear Grylls Knife review. Â I did not find myself in any life-or-death situations, but I did wander into the woods and got familiar with this blade.

First off, let me say that the knife feels good in the hand. Â I found it to be well balanced and the handle filled my hand.

From the factory, the blade was sharp. Â The fine edge portion of the knife cut cleanly, and the serrated portion worked fine for sawing through thick rope and skinning bark from a sapling. 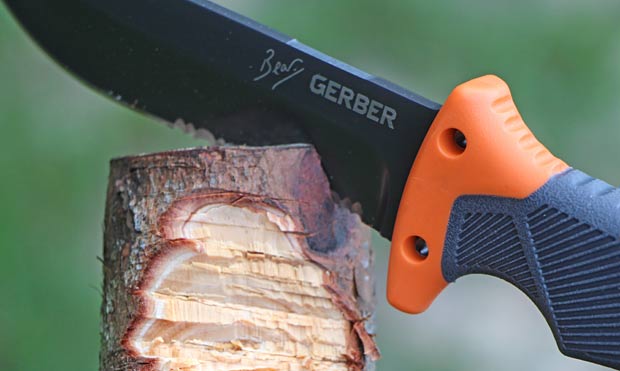 One of the things you might need to do in a survival situation is to chop down small trees or remove limbs from a tree. Â For example, you might need to construct a shelter or build a litter. Â While no knife is going to be as useful as an axe when taking down a tree, a large enough knife can certainly chop through a thick branch or small tree trunk.

The Bear Grylls knife did quite well at cutting through several branches with about a 2″ diameter. Â Sure, a hatchet would have done the job a little quicker, but this is a survival situation where you may not have the ideal tool with you.

The fire starting rod works as you might expect. Â Briskly scrape the notch on the knife’s spine (not the fine edge!) down the rod and sparks fly. Â The idea is to have a pile of dry tender that you ignite with the sparks. Â If you have never started a fire in this manner, I strongly suggest learning this skill in the backyard before you need it in the woods.

Some people reported that early examples of the Grylls knife had weak butt caps that would break away from the handle. Â I did not find this to be a problem with my knife. Â I pounded this knife on rocks and had no signs that the end cap was weakening at all. Â I would assume that any of the early problems have been worked out. 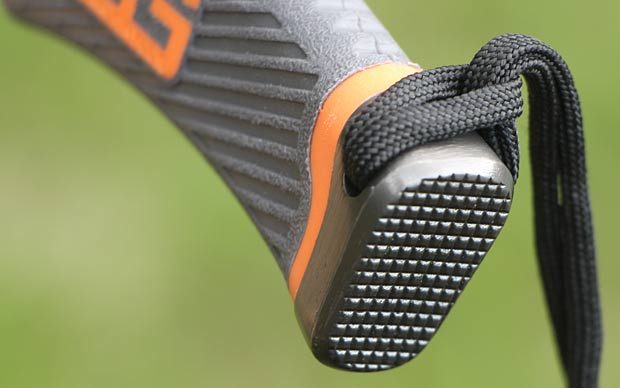 The whistle is small, and for its size, it does an adequate job of being loud. Â It does not even approach the sound you can make with a Fox 40 whistle, however. Â But for something that is automatically with you any time you have the knife, it is quite functional.

While walking through the woods, the knife never came close to falling from the sheath. Â The friction lock tightly holds the knife in place and a supplementary velcro strap keeps the handle close to the body.

The included survival guide is a very basic look at wilderness survival. Â While the included information is good, it left out one obvious thing: Â how the Gerber knife fits into the equation. Â For example, the section on fire starting offered no information on how to use the included fire starter. Â No mention was made of using the knife as a chopping tool or as a spear. Â This seems to be a glaring fault. 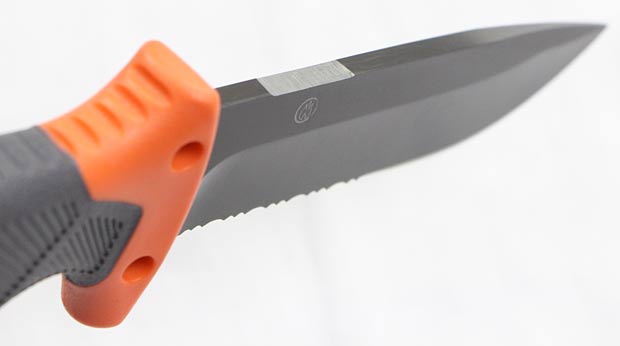 There are a variety of changes in the new Pro model, and I have summarized some of them in the table below.

One of the changes made was the kind of steel used for the blade. Â The original Bear Grylls knife uses 7Cr17MoV, while the Pro model usesÂ 9Cr19MoV. Â Both steels are stainless steels made in China. Â It is said thatÂ 7Cr17MoV steel is similar to 440A, while theÂ 9Cr19MoV steel is closer to 440C. Â 9Cr19MoV is generally considered to be a higher-end steel than theÂ 7Cr17MoV.

While I have never been through a true outdoor survival situation, I have definitely spent a lot of time outdoors. Â For all but the most extreme circumstances, I believe this knife will work well for most people.

Keep in mind that if I was planning on being in a survival situation, I would carry more than a single knife with me, and I would likely prefer a more rugged blade. Â But, for a knife that is handy to have while hiking or camping that can be used to help survive unexpected dangers, the Bear Grylls Ultimate knife is a reasonable choice.

For example, I would definitely have a PLB or EPIRB with me to summon help.

I would not classify this as the best survival knife ever made, but I would say that it is a very good knife for the money. Â Available through Amazon, the knife is a solid buy for anyone wanting a fixed blade knife to carry into the woods. 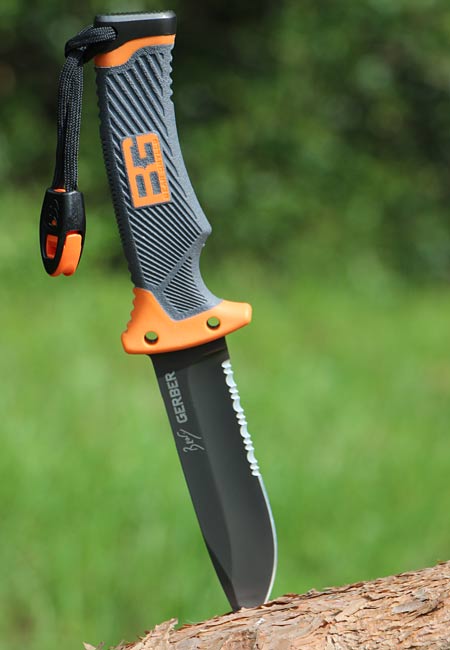