Aaron got a chance to visit with Jared Wihongi and talk about the Browning Black Label Shadowfax knive at the 2012 SHOT Show in Las Vegas. – Ed. 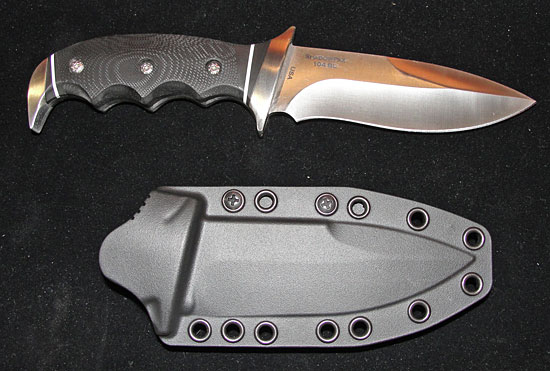 John M. Browning is best known for his firearms. He is perhaps the most influential firearms designer of all time. His incredible genius produced the Winchester Model 1897 pump action shotgun, and the Winchester Model 1886, 1887, 1894 and 1895 lever action repeating rifles. He also designed the Remington Model 11 semi-auto shotgun, the Colt Model 1911 .45 ACP pistol, and later M2 â€œMa Deuceâ€ .50 caliber machine gun, as well as, the BAR (Browning Automatic Rifle), and the Browning Hi- Power Model P-35 9mm handgun. His namesake company has a storied past, present, and future in the firearms industry. Itâ€™s been about 40 years ago that the Browning Company began producing a nice line of hunting knives. During that time theyâ€™ve developed a good reputation for quality knives.

Now Browning is venturing into the world of tactical knife making. The Black Label series of knives by Browning are meant to make a bold statement in a market that is rapidly becoming as tight and competitive as the most precision of firearms market. And the Black Label knives aim to jump into the fore front of this area of knife making with their very first.

The Black Label series of knives brings together the creative craftsmanship of veteran, and award winning knife designer Russ Kommer, with the tactical, martial arts, and knife fighting experience of instructor Jared Wihongi.

Russ has been a big game hunting guide in Alaska and Idaho for nearly 30 years. Finding many knives not up to the task Russ began designing his own knives in 1997, many of which have gone on to win â€œBest in Showâ€ awards. With his rugged, backwoods experience Russ promises to bring the most sturdy materials to his knives. 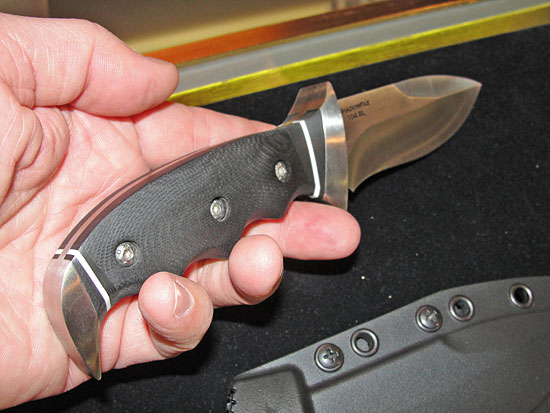 Jared hails from New Zealand and is now a reserve SWAT officer in Utah. He has several black belts in martial arts, including the Filipino blade fighting system of Pekiti-Tirsia Kali. He has 25+ years of international martial arts experience to back up his knowledge of knife fighting, and he brings that knowledge and practical requirements to the Black Label series.

It is that type of background, and the feedback from end users, that has motivated Browning to create and produce the Black Label series of knives.

In a previous article I wrote about the Browning Black Label Arbitrator knife. Although at first glance the Arbitrator appears to be a beefed up steak knife, Jared told me that it was his favorite knife to use for knife fighting. Not many would choose the Arbitrator by looks Iâ€™m sure, but with Jaredâ€™s endorsement, one has to take note.

Another knife that Jared was excited to show me at SHOT Show was the Shadowfax fixed blade knife, and I took note of it right away.

This fixed blade knife has what I think is the more traditional look, blade configuration, and feel that many fixed blade users are looking for. This is definitely a tough looking knife.

The Shadowfax comes will a full tang construction, finger-grooved handle, and a G10 handle. The G10 material is becoming very popular in knife manufacturing, especially in the tactical arena. G10 is a combination of fiber glass and resin that is highly compressed and baked to shape. Touted as being impervious to liquids and moisture, the G10 handle is perfect for the user who is in less than ideal conditions. 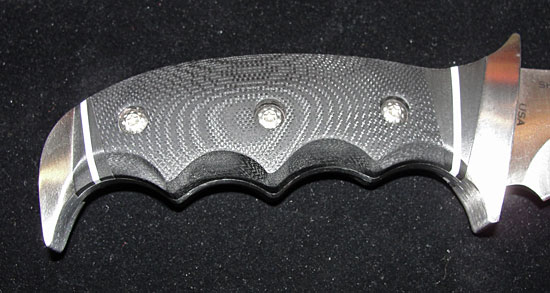 The Shadowfax handle felt very sturdy in my hand. The butt of the handle curves outward to secure the fourth finger. The guard on the handle extends out on both top and bottom, with the bottom being the completion of the first finger groove. The combination of the guard and extended fourth finger groove creates somewhat of a canoe style grip that creates a very secure grip. The butt of the grip is flat enough that it could be used to strike objects or persons. The grip is secured with (3) 6-point tension screws that are slightly recessed into the handle.

The blade is razor sharp and comes with a straight edge. It has a nice thickness at the spine, and tapers down as you get closer to the tip. There is the traditional downward taper and a forward taper near the tip end. Here are some of the other features of this interesting knife: 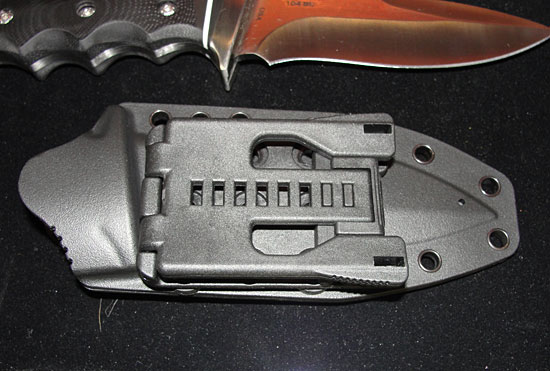 The Shadowfax comes with a Blade-Tech sheath that has a very nice mechanism on the back that makes it adjustable for different belt sizes. The sheath has a tension lock that should be strong enough to secure the knife for most uses, while allowing the user ready access with a proper pull.

Of the three Black Label knives I looked at the Shadowfax was my favorite. The $250 MSRP is a little shocking, but the wholesale price is about half of that, and I fully expect dealers to offer the knife for as low as $150.00. 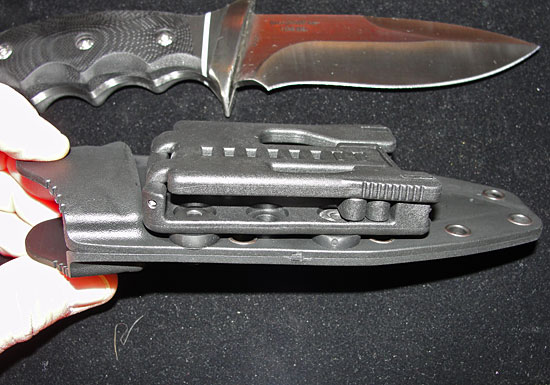