(This article is a review of the Gerber Swagger knife. Â The specific model reviewed is the partially-serrated version, but a fine edge version of the Swagger is also available from Gerber. Â Please add your own experiences with this knife in the comments at the end of this review.)

At a Christmas party I got a Gerber Swagger knife during a gift exchange. Iâ€™ll take a knife as a gift anytime, and I have owned several Gerber knives so this was a welcomed addition.

This Gerber knife has a 3.2â€ blade according to the packaging, or 3.3â€ if you go to the Gerber website. Thatâ€™s not the first time Iâ€™ve seen differences from packaging and websites. Measuring my blade it would appear that itâ€™s closer to the 3.2â€ if I measure to the furthest extension of the grip, which extends out in the middle and tapers back to the sides. If I measure to the sides of the grip, behind the point on the blade, I could see the 3.3â€ measurement.

When fully extended the knife is 7.5â€ long, and I confirmed this with my own measurement. The knife is approximately 4.3â€ in the closed position.

My knife has the partially serrated blade, but a full fine edge version is also available. That is the only difference between the two versions, but there is another minor difference with other Gerber knives that Iâ€™ll point out further in this article.

The fine edge and serrated portion of the blade come pre-sharpened, and should be ready for immediate use in a variety of needs. A minor complaint is that my knife already had some of the coating on the blade peeling off. This was at the back end of the blade, and appeared that it was probably peeled back as the builder fit the blade into the handle. Itâ€™s only really visible when the blade is closed, and not a terrible thing, but a little sloppy for a Gerber new knife. 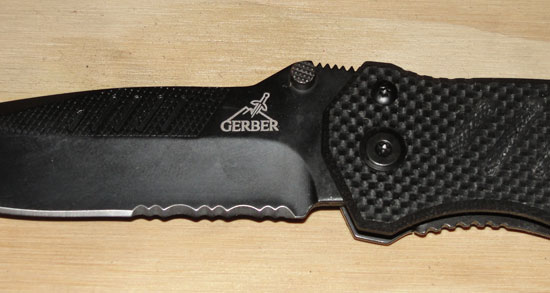 The blade has a textured portion on the top of the blade with five grooves drilled into the blade. This appears to be for aesthetics only. It is in the position a person would place their fingers to close the blade, but I found the texture to be only marginally helpful in grip for this function.

The handle on the Swagger comes in two different textures. This isnâ€™t a difference between blade selections, but appears to be intentionally designed for all Swagger knives.

The left side handle (for a right-handed person) has an aggressive texture with some drilled traction grooves. This texture should definitely hold up during wet weather or sweaty hands conditions.

The right side handle is polished steel with only three grooves. The right side also has the pocket clip attached to it with the word â€œGerberâ€ printed on the clip.

Although this knife has ambidextrous thumb studs, the pocket clip is not reversible. Meaning that a left-handed owner would have to work through the pocket clip to open the blade, and then would have an awkward holding position with the clip pressing against the left thumb, instead of resting on the fingers like a right-handed holder.

This is a manual opening knife that has ambidextrous thumb studs to assist in opening. The blade is locked into the open position by a standard locking bar located in between the handles.

One of the few disappointments with this knife so far is that the blade and the locking bar came very stiff. Most Gerber knives I have owned or tested, have always had a very smooth operation from the start. I know many knew knives need a little working to break them in, but my knife will definitely take some extra working.

When examining the pivot point of the blade I noticed that Gerber used two apparent plastic washers to keep the blade in line. As the blade is moved these washers move with it. It might just be that the mechanism is put together a little too tight.

This knife was put together with fairly standard 6-point screws, should the need arise to tighten connections.

Unfortunately there is very little information on the packaging or website to say what kind of steel was used in the blade.

We do know that the handle is made from G10 with stainless steel inserts. Â The knife comes with a blackened coating on both blade and handle. Â As mentioned before, the blade appears to have been painted or coated with a black material post manufacturing. 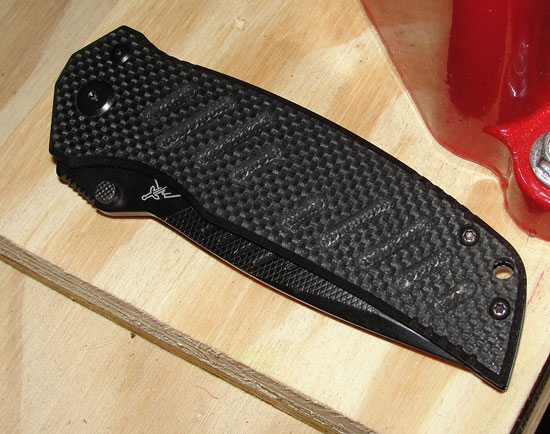 The overall weight of the knife is only about 4.4 oz.

The Swagger knife can be purchased through Gerberâ€™s website for $32.00 with the serrated edge, or just $27.00 for the full fine edge version. Over at Amazon, you can pick up the Gerber with the partially-serrated edge for less than $26, and the fine-edged Swagger for less than $20. Â Both knives qualify for free shipping.

This is a petty gripe, but when I think of â€œswaggerâ€ I think of John Wayne. I imagine something that is going to catch your attention, make you believe that something with a little American flair is being presented. Although this is a fine and sturdy knife that appears to be built with Gerberâ€™s finest traditions, in my opinion it lacks the features to live up to its name. It is for all practical purposes a basic pocket folder knife – a good one, but a simple one at that.

Putting the minor gripes aside, you canâ€™t go wrong with owning one of these knives, and for the price I think youâ€™ll be very happy with your purchase. 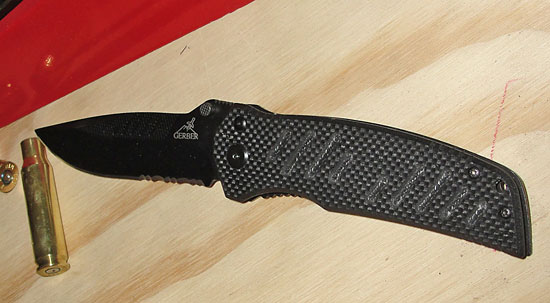 Oh, the little difference I mentioned earlier in this article? Take a look at the Gerber emblem on the stock photo from their website. Youâ€™ll notice that the traditional Gerber emblem – the sword stuck in the side of the mountain – has been replaced with a new emblem. The new emblem has the sword pointing down and going through what appears to be military rank stripes. The blade then ends in the open ended bottom of a shield.

When looking through their website it first appeared that this emblem might be reserved for more militaristic/police style knives like the new Warrant Tanto knife, but I wouldnâ€™t classify the Swagger as being one of those. It may be a trend from Gerber to replace the venerable and very distinguishable emblem that clearly identifies the company. I like the new emblem, it looks very cool. However, I liked the old emblem for its uniqueness.

Interestingly, the Swagger knife that I got as a gift still has the older emblem on the blade, which makes me think this may signal a total switch is coming and not just for certain Gerber knife models. Weâ€™ll see. 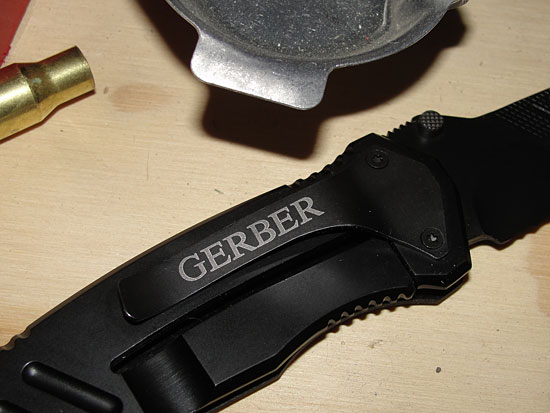