The Glock 42 is less than a year old, but it is already a very popular model in the Austrian company’s catalog. In just the few months since the gun was introduced, nearly every manufacturer is now making a holster for the pistol and so far two companies are making a laser aiming device for them. This article is a review of the recently introduced LaserLyte TGL. When it arrives, the LaserLyte TGL is separated into two halves. It comes with a set of screws, a button and several hex keys. The package also contains simple instructions for assembling the unit.

Red lasers are typically considered unusable in bright daylight conditions, and the TGL is no different. In full sunlight, the red dot is nearly invisible and far too hard to see to be of any use in a self-defense situation. In lower light situations – early evening or indoors, for example – a red laser is very useable.  Of course, in near total darkness, a red colored laser will be exceptionally easy to see. After mounting the light and getting used to it with some dry fire drills, I took it a nearby indoor range. My TGL was shooting pretty low left, but after a little adjusting with the included hex key, I had the laser point of aim in line with the pistol’s sights at about seven yards. 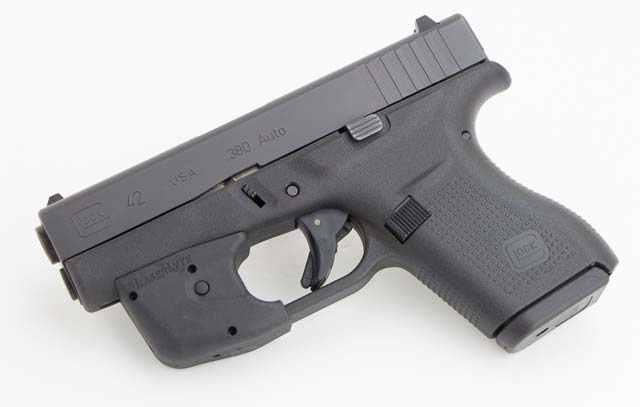 Bottom line: this Glock 42 laser is a solid performer, and it is also the least expensive laser currently available for the gun. If you want to add a supplemental aiming device to your G42, the LaserLyte TGL deserves your consideration. Fourth, GunsHolstersAndGear.com is an independent, for-profit website. I do not charge readers a dime to access the information I provide. […] Glock 42 pistol. These new weapon lights mount to the front of the G42 frame similar to some of the laser aiming devices that are on the […]

I have a Glock 27 with the LaserLyte TGL but i cant find a Holster to fit. Any one know where i can get one at..