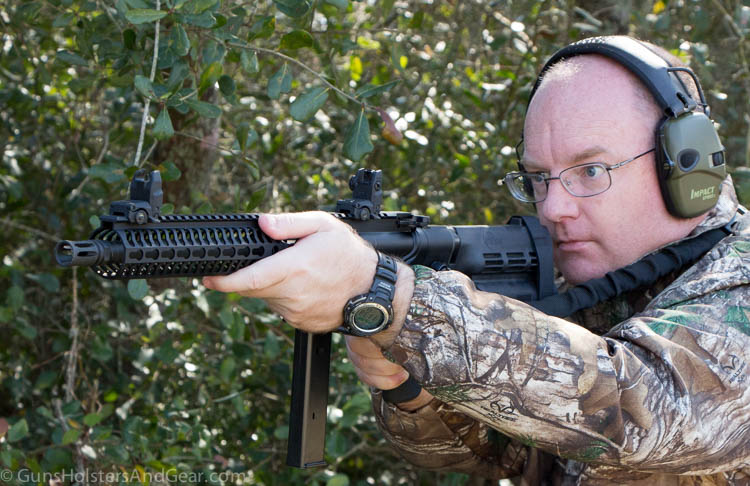 Thatâ€™s probably the best word to describe my feelings the first time I stepped onto the range and shot an MP5 submachine gun. With virtually no recoil from the 9mm cartridge, putting two- and three-round bursts on steel was effortless.

So, when I heard about the new Black Creek Precision (BCP) 9mm AR pistols, I jumped at the chance to shoot one. The guns looked to be about the same size as the MP5A4 I fell in love with. I had not shot a BCP firearm before, and these looked like well-built guns. After spending time on the range with one, I got that elated feeling again.

AR-pattern pistols are nothing new. Companies have been making them for years. However, it seems that in recent times there has been a new interest in chambering the AR pistol in 9mm. 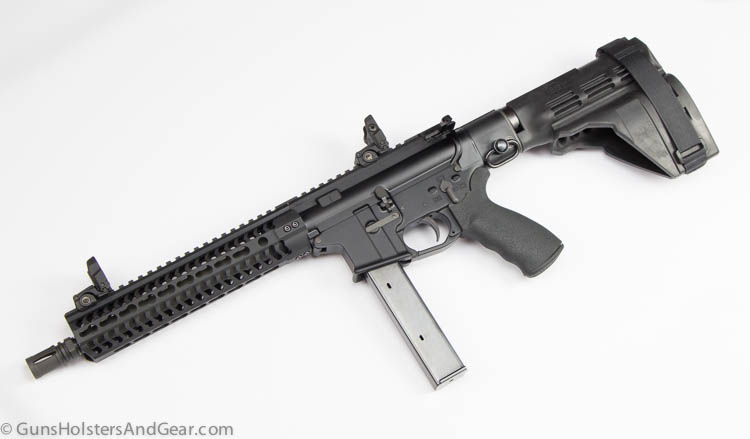 The concept makes a lot of sense to me. The 9mm submachine gun has been a reliable performer for decades. To my way of thinking, a semi-automatic pistol in an SMG-sized package is likely to be both fun to shoot and have practical applications in home defense or other serious work.

Longer barreled AR pistols are likely to help increase bullet velocity while the size of the gun will both reduce recoil and enhance accuracy. Not only isÂ the initial shot more likely to be on target, but follow up shots will be as well.

Black Creek Precision makes a pair of AR pistols in 9mm: one with a 6.5â€ barrel and one with a 10.5â€ barrel. For this review, I obtained a 10.5â€ version. While the 6.5â€ gun has its appeal, I wanted to see what another 4â€ would do for ammunition performance.

Iâ€™m glad I went with the longer barrel as the chronograph showed me some interesting numbers on the range. Skip down to the ammunition performance section to see what I discovered. 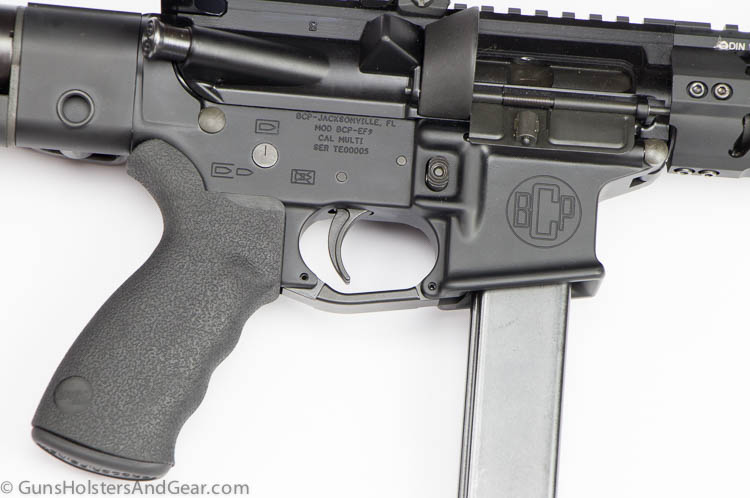 My gun shipped with a SIG SAUERÂ SB15 pistol brace. The SB15 is designed to help increase accuracy when shooting an AR-style pistol with only one hand. The braces have been very popular with shooters since their introduction, and many AR pistols ship with them attached.

Of course, some people have used the braces asÂ an improvised stock to improve accuracy. The BATFE, however, determined that using the brace in this way makes the gun into an unregistered short barrel rifle. I won’t get into the government’s twisted logic here, but the bottom line isÂ if you use the brace as a stock, you could be charged with a federal crime.

The upper and lower receivers are forged 7075-T6 aluminum and hard coat anodized MIL-A-8625, Type III, Class 2 black. The BCP logo is engraved on the magazine well of the gun, and pictograms are engraved to indicate positions of the safety selector. Both the finishing and the engraving looked exceptionally well done. 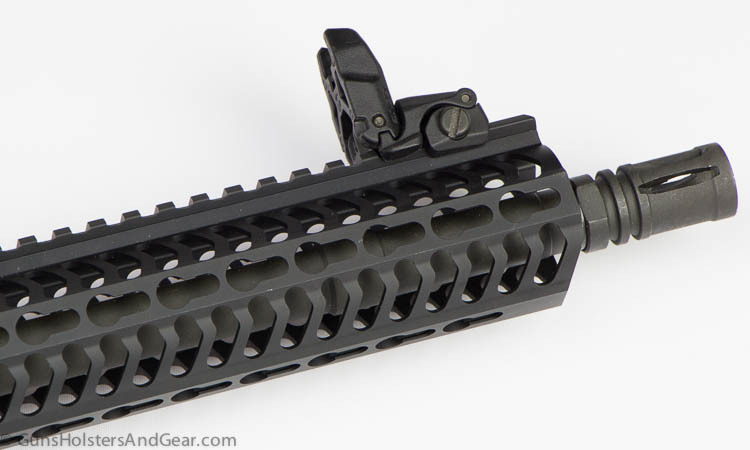 BCP uses 4140 steel for the barrels, and the barrels are threaded for the addition of a flash or sound suppressor. An A2-style flash suppressor is a standard part. The gun has a very comfortable Ergo pistol grip.

The trigger pull weight measured just a hair over 7 pounds on my Lyman digital gauge. Some might consider that a touch heavy for an AR-platform gun, however I donâ€™t consider it heavy at all on a combat-purposed handgun. When I had it at the range, the trigger pull did not seem heavy at all. The pull was even with a crisp break. 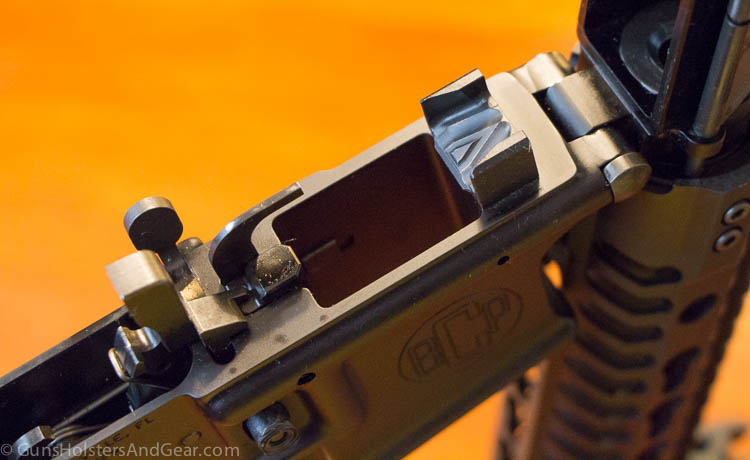 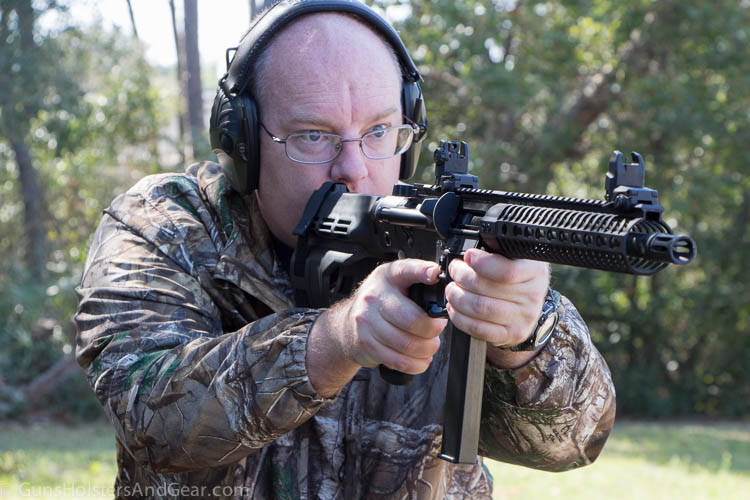 Although carrying all of the ammo to the range turned out to be a bigger chore than I anticipated, Iâ€™m glad I took a lot. I shot nearly all of it, and carrying away the empties wasnâ€™t nearly as difficult.

Accuracy was quite good with the pistol. Using standard Magpul backup sights, groups of less than 2″Â were easy to achieve handheld at 25 yards. With several of the loads, near-1â€ groups were recorded. From a rest, I would expect groups of less than 0.75â€ are possible. 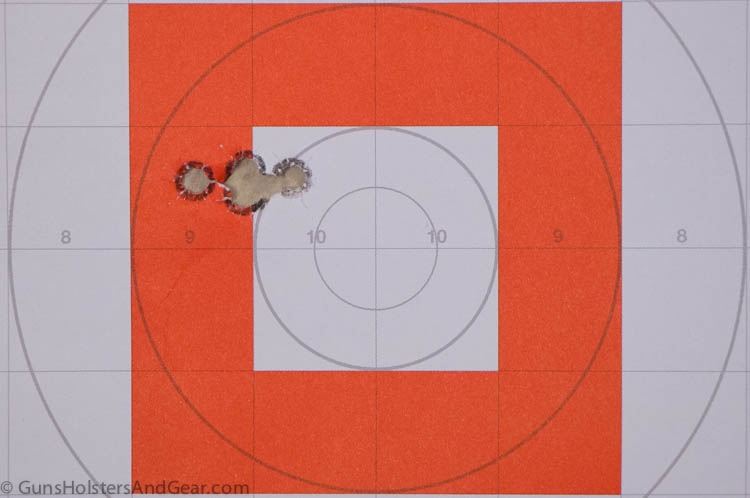 Recoil was so light that it wouldÂ make a lesser man giggle with glee. Iâ€™ve shot a number of AR pistols, and while I would never describe the .223 Rem as a punishing cartridge, recoil is noticeable in those guns. The 9mm, however, has so little recoil in an AR pistol that one might think he was shooting a toy. 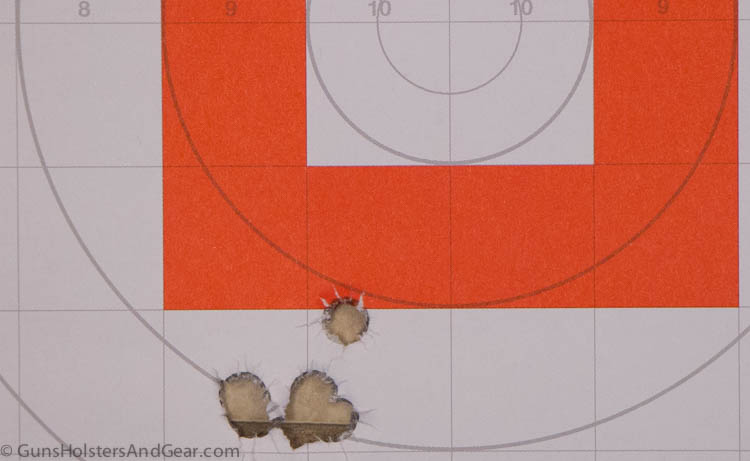 Using a single-point Blackhawk Storm XTÂ sling for stability, I pushed the gun out to full extension and rapidly fired multiple rounds with very little muzzle rise. Likewise, I pulled the gun in tighter, and usedÂ the buffer tube to obtain a cheek weldÂ forÂ even more control. In light of the aforementionedÂ BATFE determination stating that it is illegal to use the pistol brace as an improvised stock (against the shoulder), I would recommend against doing so.

However, the easiest aiming device Iâ€™ve found to use with the brace is a laser. Mounting the new Streamlight TLR-2 HL G on the hand guard givesÂ the shooter both a bright green aiming laser and a 720 lumen white light for target identification. Frankly, having both a white light and a secondary sighting system on the gun makes a lot of sense even for shooters not using the arm brace.

All of the ammo ran flawlessly in the gun. I shot the gun using both the 20- and 32-round magazines. All of them fed perfectly and performed exactly as they should.

The 10.5â€ barrel seemed to give a lot of the ammo loads a boost of speed, with some loads receiving a more pronounced boost than others. In general, increasing a barrel length tends to increase velocity to a point. Shoot a .357 Magnum load from a 2â€ revolver and then from a 6â€ revolver. Ammo shot from the longer barrel gun will be significantly faster than when the load is shot in the snubby.

However, speed increases from barrel length do have a tipping point where the velocity will actually be reduced because the barrel is too long. Different calibers and loads within those calibers will perform differently with varying barrel lengths. Using the .357 Magnum as an example again, a 16″ barrel is likely to give a velocity increase over then 6″ barrel, but a rifle with a 32″ barrel might show a decrease from the 16″ – or even 6″ – barrel.

In general, velocity of 9mm ammo in the 10.5â€ barreled BCP was measurablyÂ increased when compared to shorter barreled handguns. Consider the Hornady Critical Duty 135 grain +P load. In another of my reviews, this ammo averaged 1,061 fps from the 4.09â€ barrel of HK VP9. That same load ran 152 fps faster from the Black Creek Precision gun. That equates to an increase of more than 14% and 100 ft-lbs of energy. (Note: I have a full review of the Hornady Critical Duty ammo here. The review includes data from many different guns.)

Benefitting the most from the increased barrel length was the Civil Defense ammo from Liberty Ammunition. Like the other loads I shot, these rounds were very accurate and had very little recoil. However, running them across the chronograph was quite interesting. On average, these 50 grain bullets were screaming along at 2,473 fps! From the VP9, the same load averaged 2,057 fps. So, the longer barrel added more than 400 fps and 200 ft-lbs of energy to the load.

Compare those numbers to AR pistols chambered in .223 Rem. In my experience, a premium 55 grain .223 round will produce between 2,100 â€“ 2,250 fps from a similar length barrel. However, the .223 round also produces significantly more recoil and muzzle blast.

There are definite differences between the 9mm bullet and .22 caliber bullet designs, and I am not naÃ¯ve enough to think it is an apples to apples comparison. However, at these velocities a light 9mm round that produces this kind of velocity with less recoil and muzzle blast than the .223 is worth considering for home defense or even tactical operations.

Black Creek Precision may not be a name you are familiar with, but if this pistol is any indication, you should be. The BCP 9mm pistol runs flawlessly, looks good and is fun to shoot. Even after running hundreds of rounds through the gun, the gun was utterly reliable. Even the finish on the pistol and the magazines was in excellent condition after my less-than-elegant operation of the weapon. 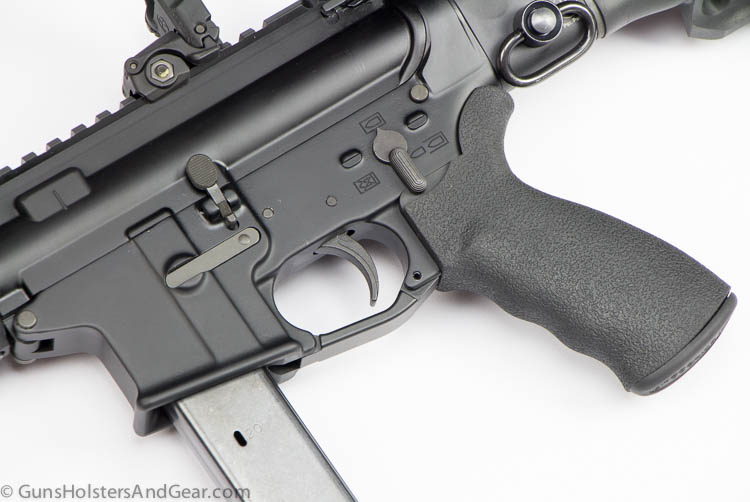 With the longer barrel, 9mm ammunition runs faster and hits harder without an increase in recoil or muzzle flash. The addition of a sound suppressor would reduce harmful noise and make the gun even more controllable.

Is it the ideal home defense gun? Thatâ€™s for you to decide. However, I do think that it has a lot of potential by offering better performance than a traditional handgun, while having less recoil and blast than a rifle.

It is my intention to provide you, the reader, with the best information possible when researching guns andÂ shooting gear that you might purchase. I believe it is important that I share with you any possible biases that might have influenced my review so you can properly weigh my opinions on the gun.

First, Black Creek Precision provided this pistol to me on loan for the purposes of review. No promises of a positive review were offered by me or solicited by the company. To the best of my knowledge, the gun provided was a standard production firearm. No monies were exchanged or offered in return for doing this review.

Lastly,Â GunsHolstersAndGear.com is a for-profit website.Â I do not charge readers a dime to access the information I provide.

Questions and comments about the review or disclosures can be left in the comment section below. I encourage everyone who has something to add to chime in. I do not know everything, and your experiences with this gun, 9mm ARs or any other topic can be a benefit to other readers.