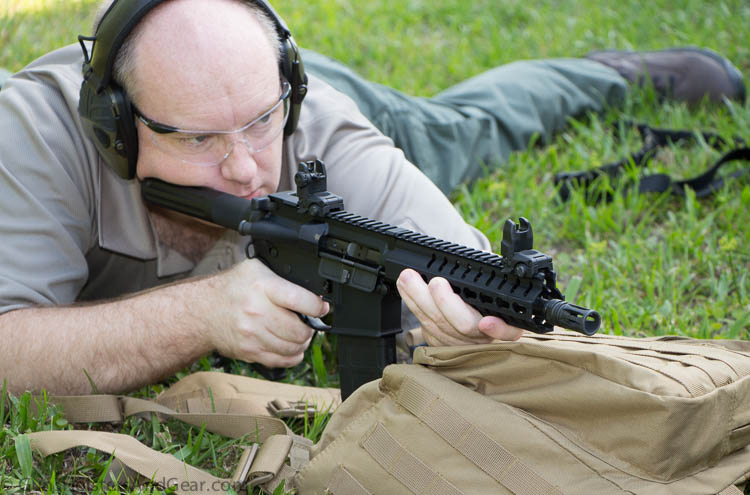 Two things in the gun industry have seen a surge in popularity with shooters: AR-style pistols and the 300 BLK cartridge. It should be no surprise that, like REESEâ€™S Peanut Butter Cups, a few companies are eagerly putting these two things together to offer shooters a package greater than the sum of its parts.

One such example is theÂ CMMG Mk4 PDW pistol that is chambered for the 300 BLK. More than just another AR pistol, this handgun offers a number of nice features in addition to being chambered in a .30 caliber cartridge.

The Mk4 PDW pistol is an AR-style handgun. It uses a gas impingement system and operates much the same as an AR-15 rifle. The charging handle, safety, and magazine release button are all in the familiar places. 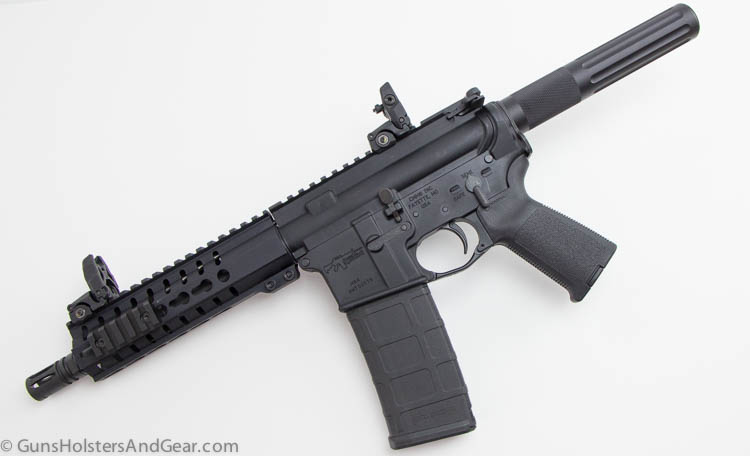 Likewise, the gun has a buffer tube that extends to the rear from the lower receiver. The tube is normal on AR-pistols. On the Mk4 PDW, it is long enough to significantly add to the overall length of the gun, but short enough not to be confused with a stock.

Many AR pistols are chambered in 5.56 NATO. One of the things that make this gun so interesting is that it is chambered for the 300 BLK. If you are not already familiar with the 300 BLK cartridge, it is essentially a .30 caliber bullet in a necked-up .223 Remington case. 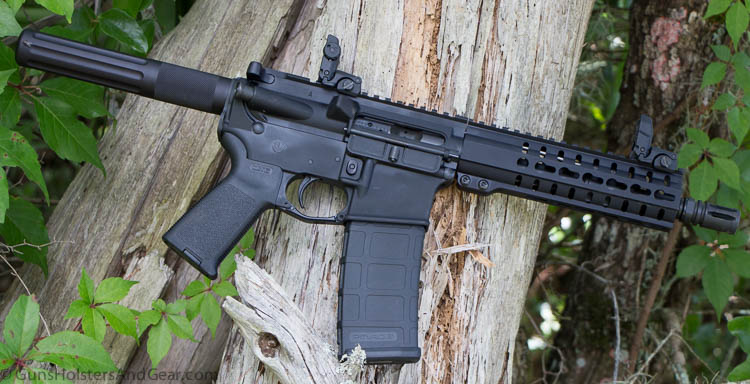 One of the benefits of the 300 BLK cartridge is that it will run with standard .223/5.56 parts including magazines and the bolt. There is a lot of interest in the shooting community about using the 300 BLK in self-defense and hunting roles â€“ especially in short barrel rifles and pistols.

Since the 300 BLK can be loaded with heavy bullets at subsonic velocities, there are quite a few 300 BLK guns with sound suppressors on them. Hog hunting with suppressed 300 BLK rifles has become quite popular in many areas.

A single Magpul Gen2 30-round PMAG magazine ships with the CMMG pistol. Any standard AR-15/M-4 type magazine should work fine in this gun.

Other Magpul parts are also used on the gun. The pistol grip is a Magpul MOE, and the oversized trigger guard is also a Magpul product. A larger-than-normal trigger guard gives a shooter wearing gloves better access to the bang switch. 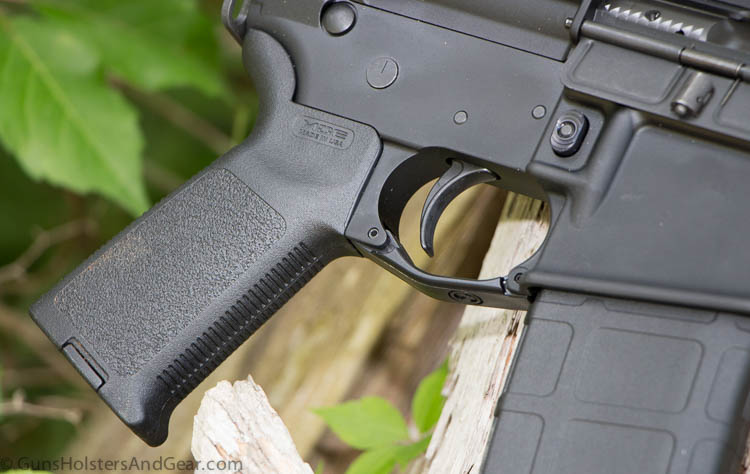 Sights do not ship as a standard part of this pistol. However, the hand guard and upper receiver have a Picatinny rail. Sights, whether iron or glass, can be quickly added to the handgun. Red dots (such as the Trijicon MRO) and iron sights designed for the AR-15 rifle are a good match for this gun.

CMMG uses the RKM7 free floating KeyMod hand guard on this pistol. The handguard eliminates rails in the 3, 6 and 9 oâ€™clock positions. Instead, it has keyholes that allow the shooter to add a compatible accessory directly, or short and long Picatinny rails. 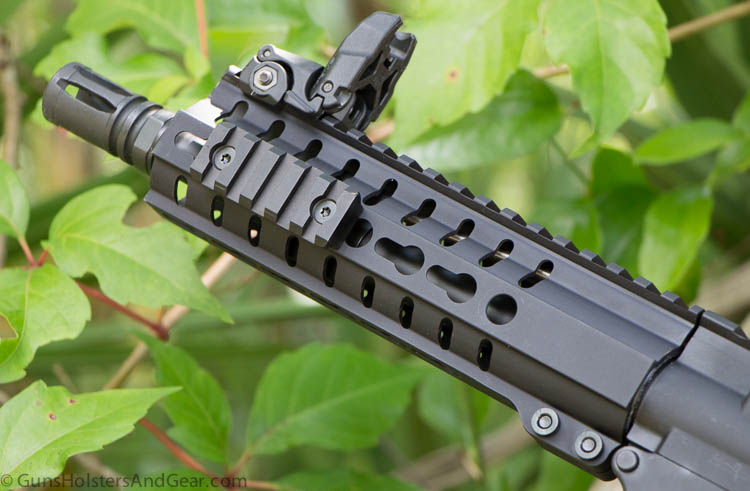 Compared to a standard quad rail, the KeyMod is both lighter and thinner. A shooter can get a better grip on the gun and the weight of the pistol is kept to a minimum. Total weight of an unloaded Mk4 PDW pistol is 5.3Â pounds. Additionally, the keyholes help dissipate heat from the barrel. 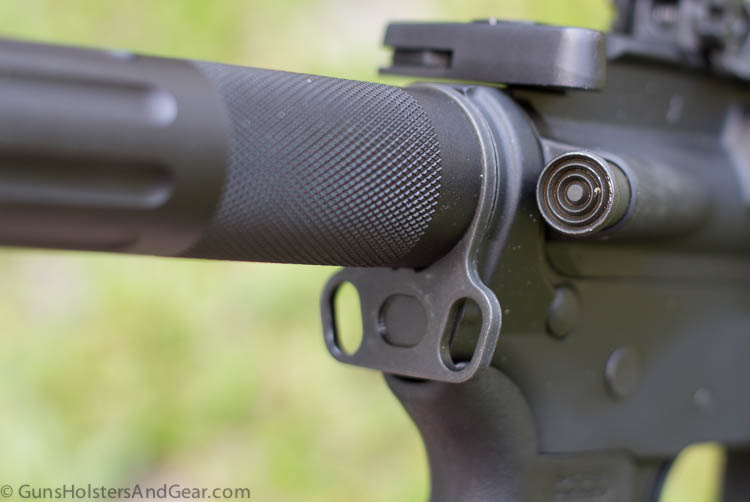 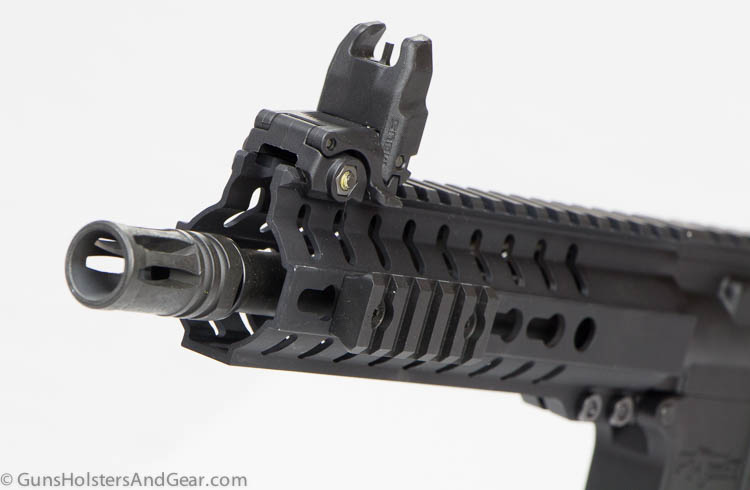 The gun I received for testing looked and felt very good. The finish on the gun was excellent; there were no visible blemishes and the engravings on the receiver were all precise cuts. The buffer tube was fluted, which gave it an attractive look. 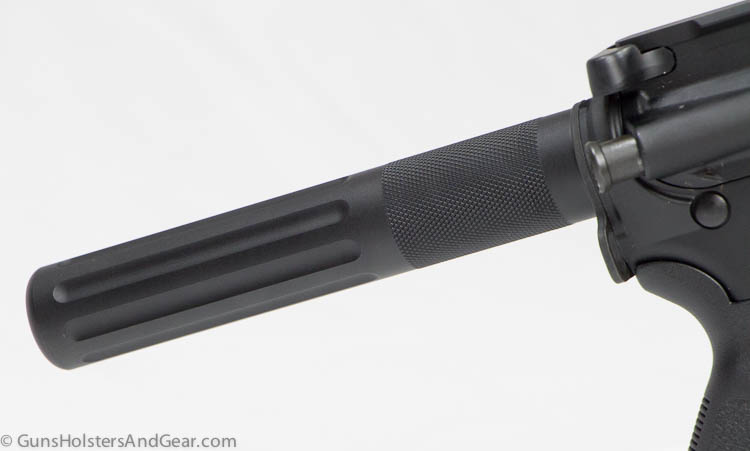 The suggested retail price of the Mk4 PDW pistol is $999.95. CMMG stands behind the gun with a lifetime quality guarantee.

I was able to get the CMMG pistol out to the range on multiple occasions. The first trip was for a little bench shooting to check the sights and function of the gun. The follow-up ventures were on a friendâ€™s land for some shooting on the move and more high-volume fire. Overall, I was very pleased with the gunâ€™s performance. 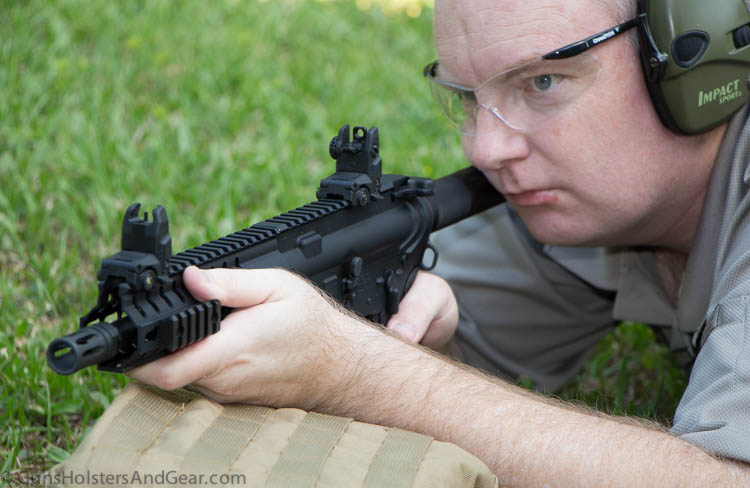 Since the pistol does not ship with sights, I added a set of Magpul Back-Up Sights (MBUS) to the gun. I also topped it with a Bushnell TRS-25 red dot sight. Iâ€™ve found the Bushnell to be rugged and a great value. After a few groups, I got the sights dialed in at 25 yards.

Moving with the gun and engaging targets was easy. The gun is light enough to shoot in a standard, two-hand grip. However, I found that I achieved the best accuracy when using the buffer tube to get a cheek weld. Even though the buffer tube is too short to use as an improvised stock, shooting from a carbine-like position was easy and natural to me. 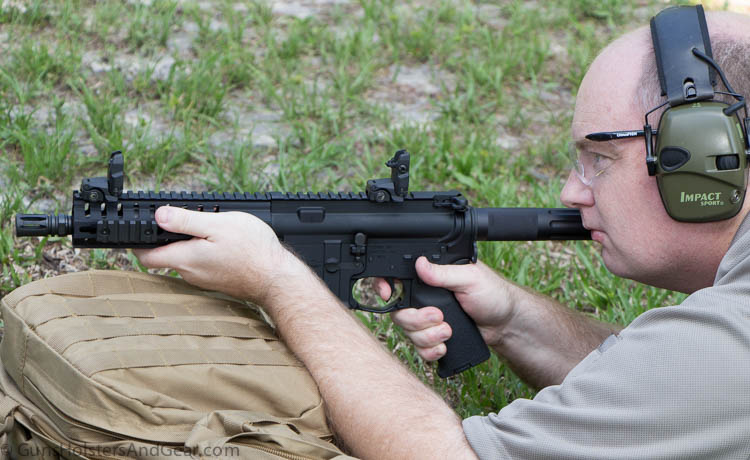 The fluting cuts on the buffer tube were substantial, but not sharp enough to cause any discomfort when shooting with a cheek weld. However, adding a buffer tube cover would still be a good idea. 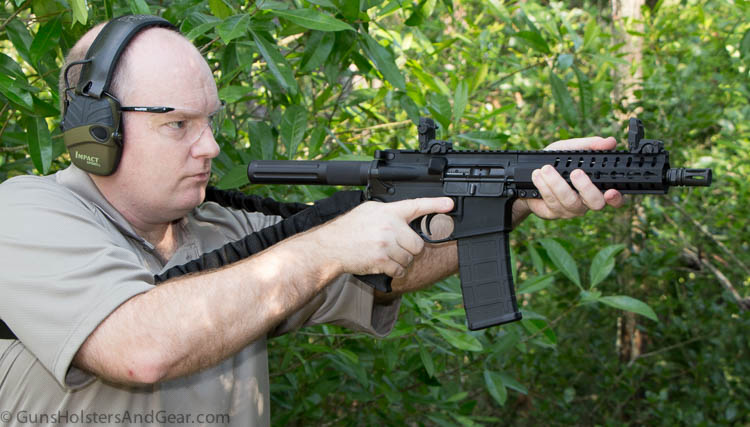 Using a Blackhawk Storm XT single point sling, I could quickly push the pistol out and use isometric tension to increase stability. I found this method was less accurate than obtaining a cheek weld, but it was faster. For close distances with the BushnellÂ optic, it wasÂ a good balance of speed and precision to get accurate rounds on target quickly.

Not surprisingly, the CMMG AR pistol proved to be a very accurate pistol. The Hornady Custom 110 gr V-MAX load consistently was the best performer of the ammo I tested, and turned in the best five shot group of 0.75â€ at 25 yards with the Magpul sights. The other loads from Barnes and Remington were no slouches either, and sub-2â€ groups with all of the ammo were common. 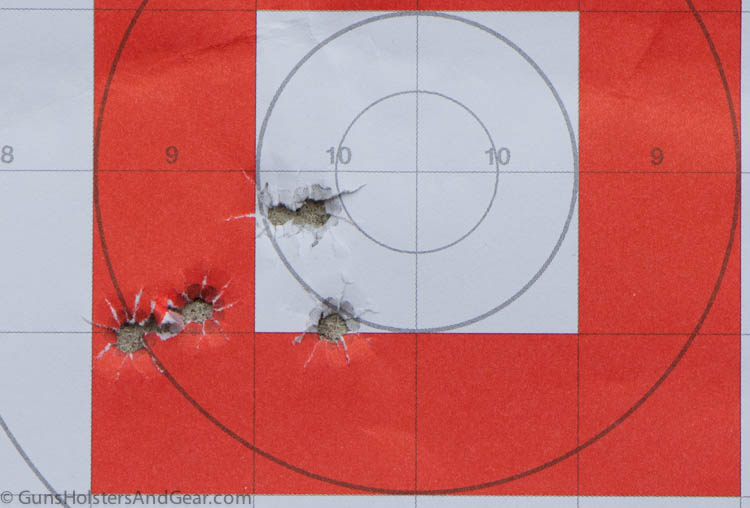 While on the range, I tried 30-round AR magazines from Brownells, Magpul and Troy Industries. All of the magazines worked perfectly with the Mk4 PDW pistol.

Subsonic rounds are very popular with 300 BLK shooters who are using suppressors. The lack of supersonic crack helps keep the noise down. According to CMMG, such rounds can be difficult to cycle reliably in short barrel guns without a mounted suppressor. Unfortunately, I do not have a great deal of experience with shooting 300 BLK from very short barrels to speak with any authority on the subject.

CMMG recommends that for reliable cycling, subsonic loads should be used in the pistol only when there is a sound suppressor attached. Without a suppressor, I tried both Remington UMC 220 grain FMJ and Gorilla 220 grain Sierra MatchKing ammunition. The rounds fired reliably, but I had to manually work the bolt after each shot.

Based on CMMG’s recommendations, this was expected. With a suppressor attached, these rounds should cycle the gun normally. 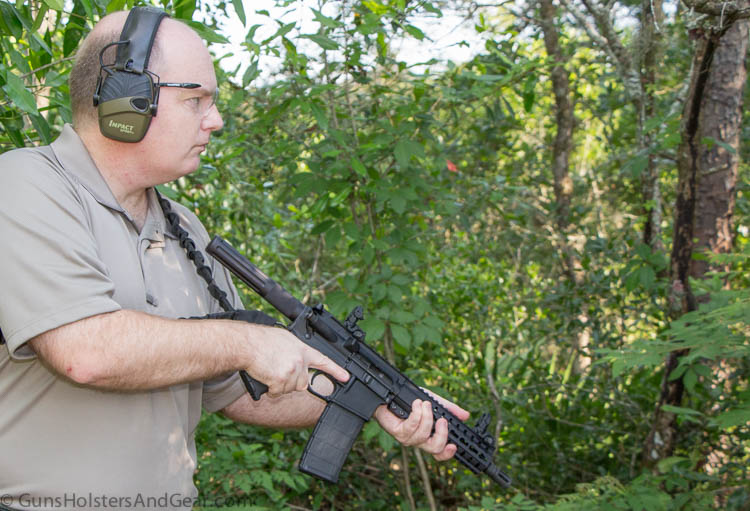 I do wish to note that I recently had a chance to shoot a Windham Weaponry AR pistol chambered in 300 BLK. With a 9″ barrel, the same subsonic rounds functioned flawlessly in that gun. It is possible that CMMG could extend the Mk4 barrel by another inch and achieve reliable cycling with subsonic ammunition.

Supersonic rounds from Hornady and Barnes cycled perfectly in the gun, and I experienced no malfunctions.

Recoil with supersonic 300 BLK feels increased when compared to a 5.56 NATO pistol, but only slightly. It is not harsh or uncontrollable. 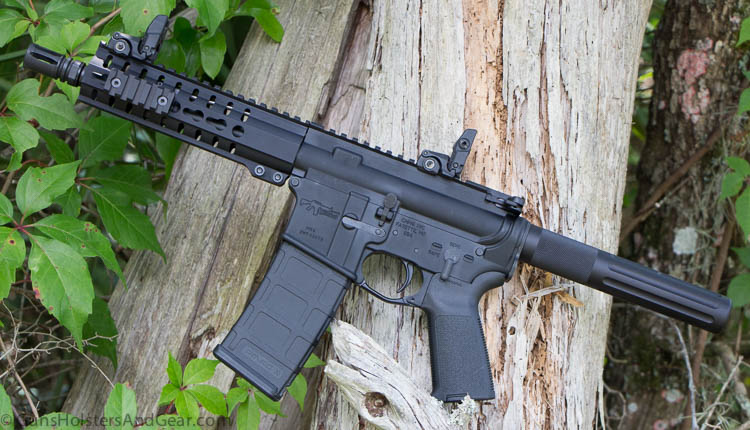 A question some people may have is does the pistol pack enough power for hunting or self-defense? In rifles, there have been excellent reports of success with the 300 BLK in hunting deer and hog. But, chopping a barrel down to 9″Â will bleed off velocity. Will the 300 BLK in a pistol work to quickly put down an armed attacker or game animal? I believe so, though the effectiveness of the round likely suffers due to the decreased velocity.

At 15â€™ from the muzzle, the 110 grain Hornady averaged a velocity of 2,131 ft-sec, which computes to more than 1,100 ft-lbs of energy. Many handgun hunting loads operate at lower velocity and energy levels, and self-defense loads are typically about half the 300 BLK numbers. 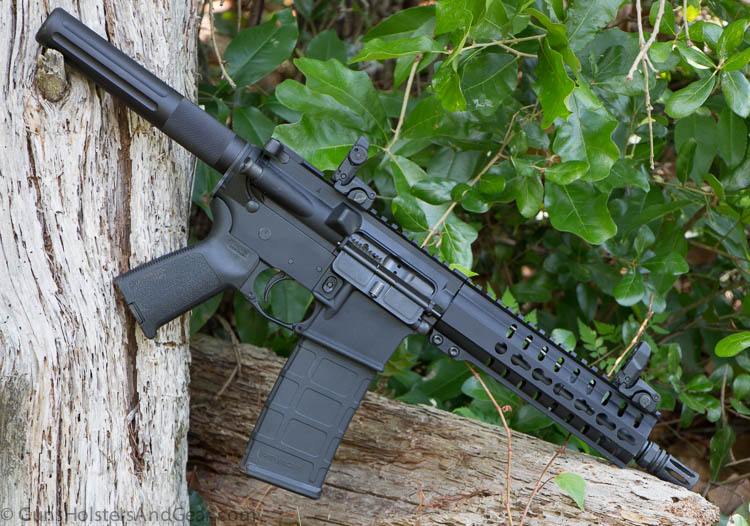 Many other factors go into the concept of stopping power, but on the surface, Iâ€™d argue the Mk4 PDW pistol should not be ruled out only because of the caliber or barrel length.

For a home or hotel room self-defense gun, I would attach a light and red dot optic to the pistol. With the 30 round magazines loaded with the Hornady V-Max load, I would feel well-armed for the vast majority of home invasion scenarios.

The popularity of the AR pistols seems to be on the rise. I see more of them at the range and talk to a lot of people who express an interest in them. Like the AR-style rifles, more companies are offering the pistols now than ever before. With the increased competition, the consumer will likely see a greater variety of style and caliber options hitting the market. 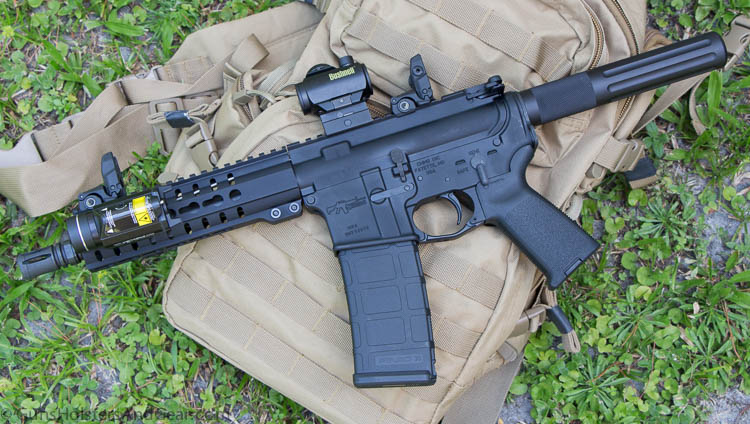 The CMMG Mk4 PDW pistol is an excellent example of the modern AR pistol. It is chambered in one of the hottest calibers to be introduced in recent years and has a number of highly desired features like the KeyMod handguard and Magpul accessories.

With all the ammo loads tested, this gun was very accurate.Â My only issue with the pistol is that it will not cycle subsonic ammunition. According to the company, with a suppressor attached, the gun will properly cycle subsonic rounds. Presumably, that is when most people would run those loads anyway.

I know of at least one otherÂ 300 BLK pistol that will run subsonic loads without a suppressor. I would be happier with this pistol if it did the same.

Other than the subsonic loads, the gun runs great and seems well built. It is worth considering as long as you are aware of the subsonic cycling issue. If you are interested, the gun can be purchased for less than MSRP here.

Long-time readers know that I disclose any potential biases that may influence my reviews. For new readers, I want you to understand what conflicts may exist that would impact my opinions expressed in this review.

I think it is only fair that you fully understand everything that went into the review so you can make a fair judgment of the information I provide. After all, it is your money that you are spending should you decide to buy this gun or anything else I talk about on my site.

First, the Mk4 PDW pistol was provided as a loaner by CMMG. The gun was sent to me for the express purpose of a review, and the gun was returned to them once the testing was complete. No promises were made, offered or solicited to provide a “good” or “positive” review.

Second, at the time of this writing, CMMG is not an advertiser or sponsor of this site. Nor am I in any talks with them to be one.

Third, GunsHolstersAndGear.com is a for-profit website.Â I do not charge readers a dime to access the information I provide.

If you have any questions or comments about this article, my disclosure or how I earn money on the site, please leave a comment below. I am more than happy to explain further.