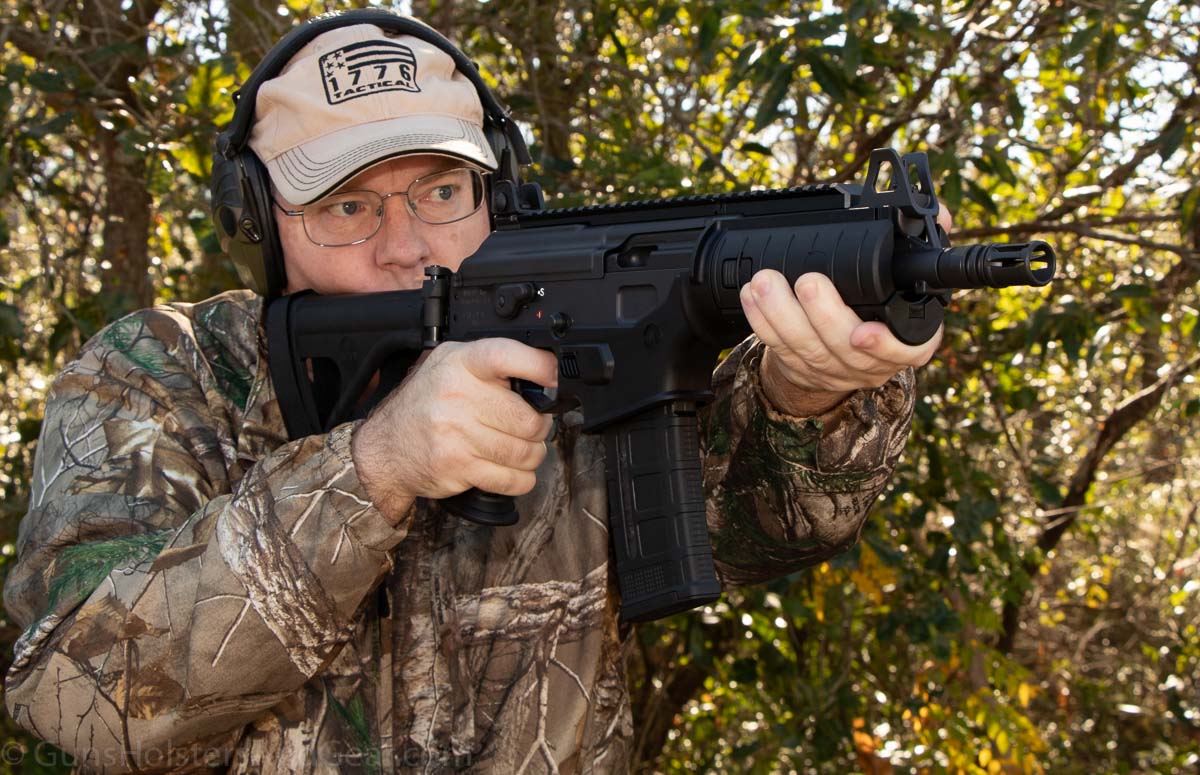 Pistol versions of popular semi-automatic rifles have become a growing niche in the firearms industry. In my IWI Galil Ace pistol review, I take a look at one of these.

This handgun is a modern interpretation of one of the indigenous weapons developed and battle-tested in Israel. It is built like a tank and proved itself utterly reliable.

Let’s go ahead and jump into the review.

Necessity is the mother of invention. Few things clarify the difference between necessities and niceties more than a war for your very survival. The State of Israel has fought for its survival in numerous wars since it declared independence in 1948.

During that time, the country used a wide variety of arms and munitions to defend itself. Over time, the country developed its own weapons industries. It is natural, therefore, that the country would build firearms to serve its unique needs, tempered by the realities it faced in combat.

Not long after the State of Israelâ€™s war for independence, it became clear that the Israeli Defense Forces (IDF) would be well served by standardizing on a modern combat rifle. The venerable FN FAL was chosen and saw combat in conflicts like the Six-Day War and Yom Kippur War.

However, many felt the FAL was ill-suited for combat in the hands of the IDF conscripts, especially in the harsh environmental conditions in which these wars were fought. Consequently, a search for a new gun began.

From the M-16 to the AK-47, the IDF considered many different rifles. Eventually, the IDF selected a new gun called the Galil.

Named after one of its designers, Yisrael Galil, the new gun drew inspiration from a number of sources, including the Finnish RK62. Â The adopted Galil fired the 5.56 NATO cartridge and had an operating system similar to that of an AK-series rifle. The Galil was made in a variety of configurations and proved to be largely successful in the hands of the IDF.

In more recent years, IWI undertook a project to update the Galil. The result was the Galil ACE. Some of the improvements included moving the reciprocating charging handle to the left side of the rifle, reducing the overall weight and adding mounting rails for optics and other accessories. 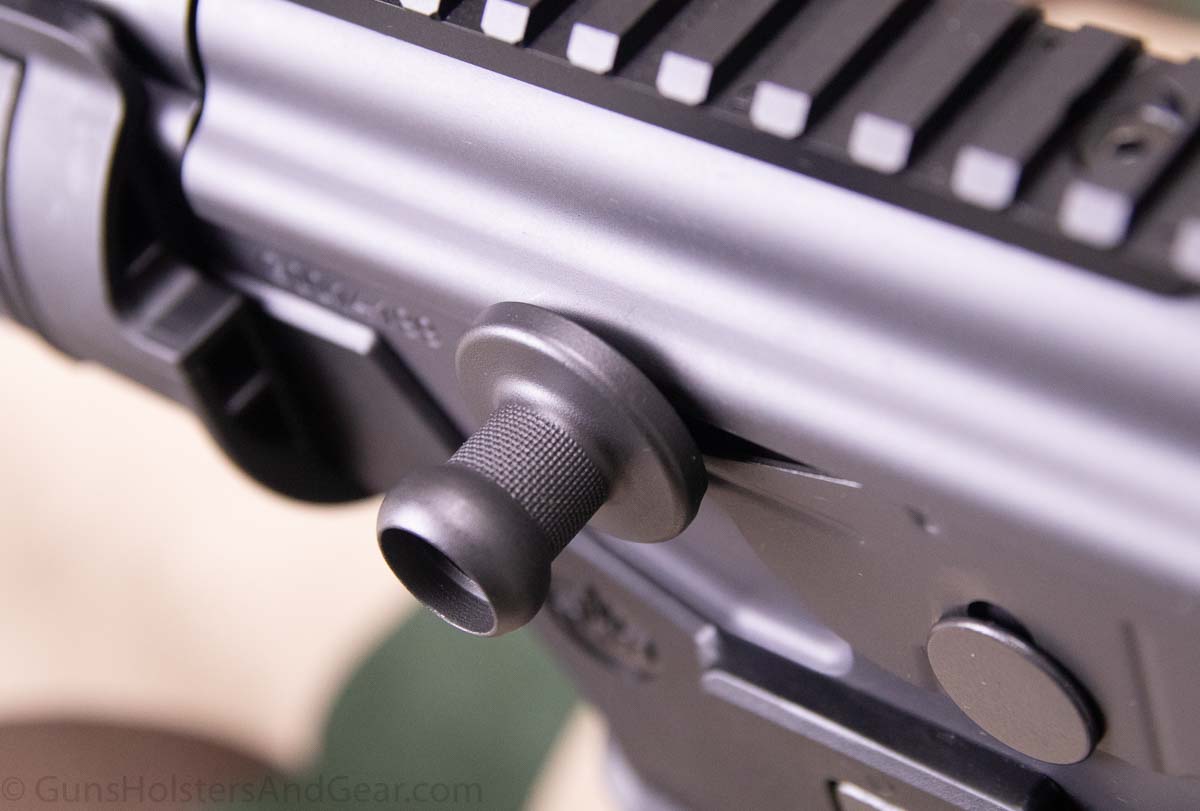 Semi-automatic versions of the Galil ACE are available for sale in the United States. In addition to the 5.56 NATO, the guns can be chambered in 7.62×39 and 7.62 NATO (7.62×51). IWI offers the guns in both pistol and rifle variants.

The specific gun I had for testing is a 5.56 NATO pistol version of the Galil ACE with an arm stabilizing brace. The brace is designed to assist people who have a disability or other physical impairment that hinders accurate shooting of a heavy pistol.

Unlike the arm braces found on many AR-style pistols, this one folds to the right side of the gun to allow for compact storage and carrying. 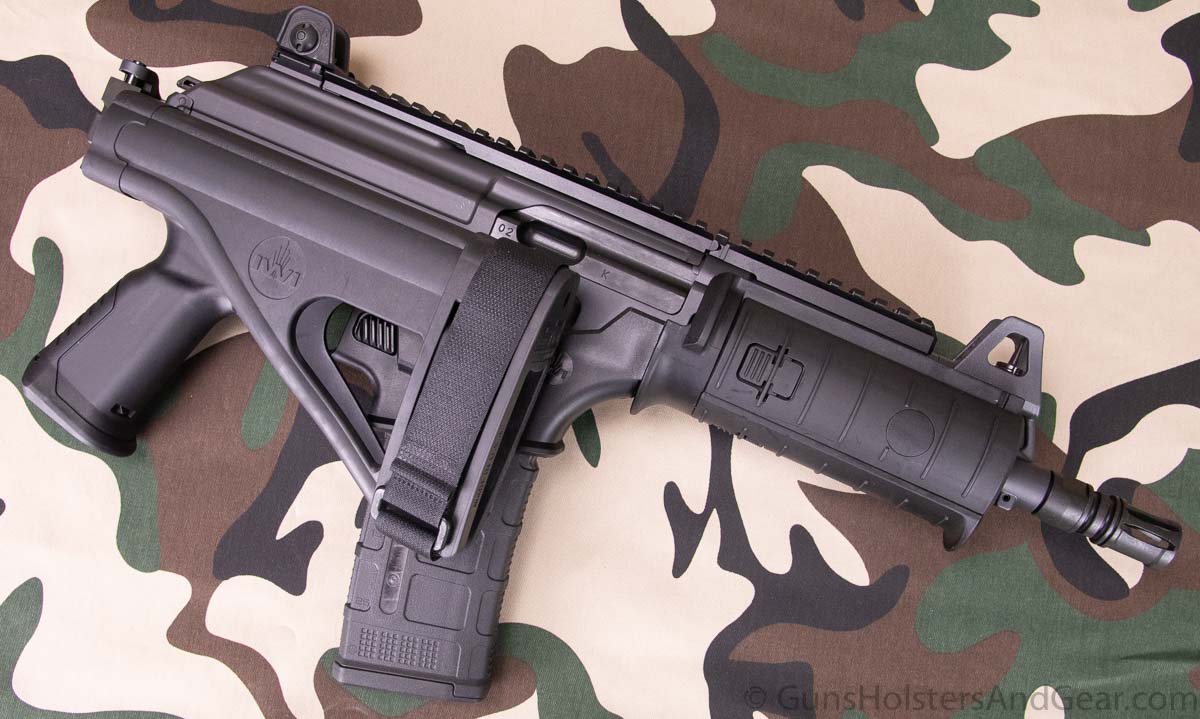 Although the short barrel and lack of stock make this a pistol under the laws of the United States, it is based on an actual combat rifle. This means it is designed to function in some of the worst possible circumstances imaginable. For this reason, reliability takes the front seat while niceties take a secondary role. Although the gun has a passing resemblance to an AR-style rifle, this is most definitely a different beast altogether.

One of the objections some shooters may have with this gun is its weight. Without a magazine or optic, the gun weighs about 7.6 pounds. This is heavier than many full-length AR-15 rifles.

One of the reasons for the weight is the Galil ACE has a milled steel receiver and a long stroke piston assembly. Both things are used by IWI to ensure long term reliability in harsh conditions. Unfortunately, both add considerable weight to the firearm. Like anything in life, it is a compromise that can make a lot of sense depending on your needs.

If you are used to running an AR-15, the Galil ACE controls will be easy to learn. Nevertheless, the controls tend to require more force to operate than those on other guns. Controls like the safety selector and charging handle require significantly more effort than the typical AR.

While most shooters should be able to handle these without a problem, new shooters and those with lower than average strength may not be as efficient with this gun. This is not a failing in the Galil ACE but a different approach to the development of a quality firearm.

Sights are included on the Galil ACE. The front sight post has a tritium insert to give you a visual reference in low light conditions. A two-piece rail runs along the top of the gun and serves as a mounting location for an optic such as a red dot. 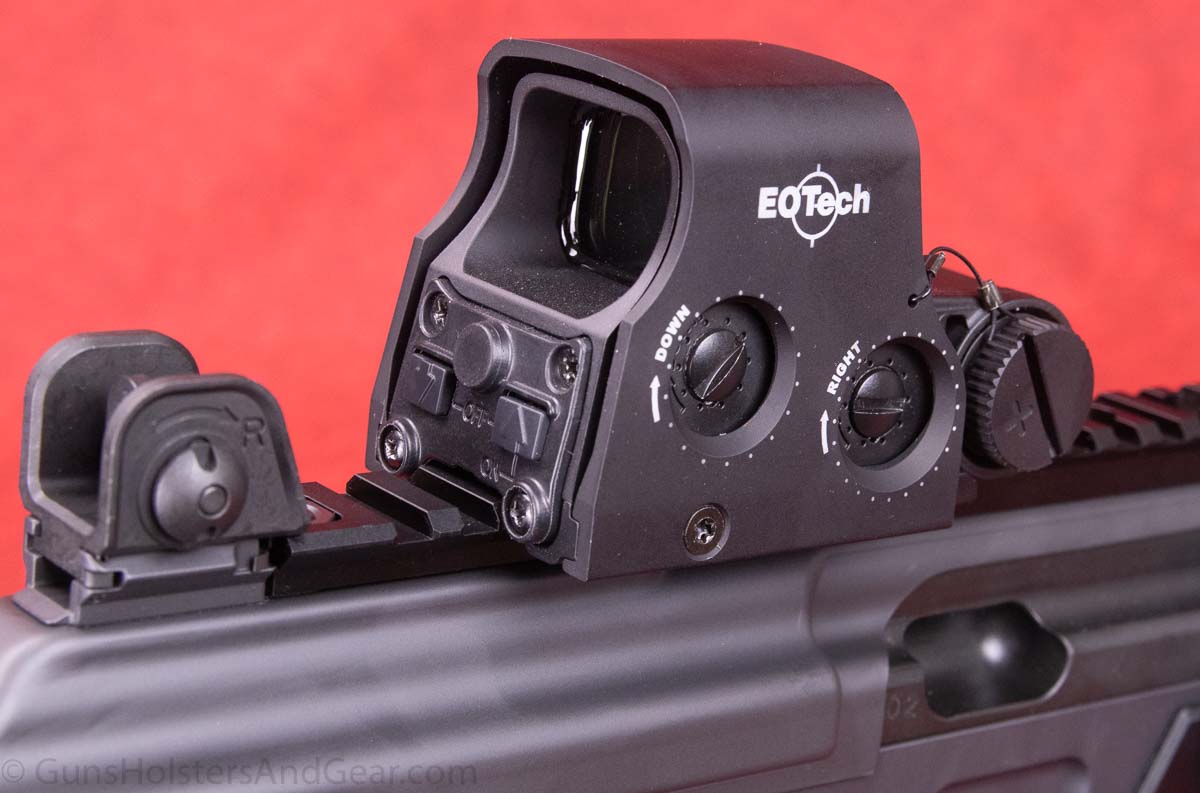 I highly recommend some type of reflex sight on a pistol like the Galil ACE. While the iron sights are completely useable, a red dot or holographic sight makes the use of the pistol much easier.

During the range testing (scroll down for more on that,) I used the iron sights extensively. However, I also mounted an EO Tech XPS2 on the gun. The XPS2 holographic sight was much quicker to get on target and offered excellent accuracy as well.

One of the slick features included on the IWI Galil Ace pistol is are the accessory rails and the sliding covers. 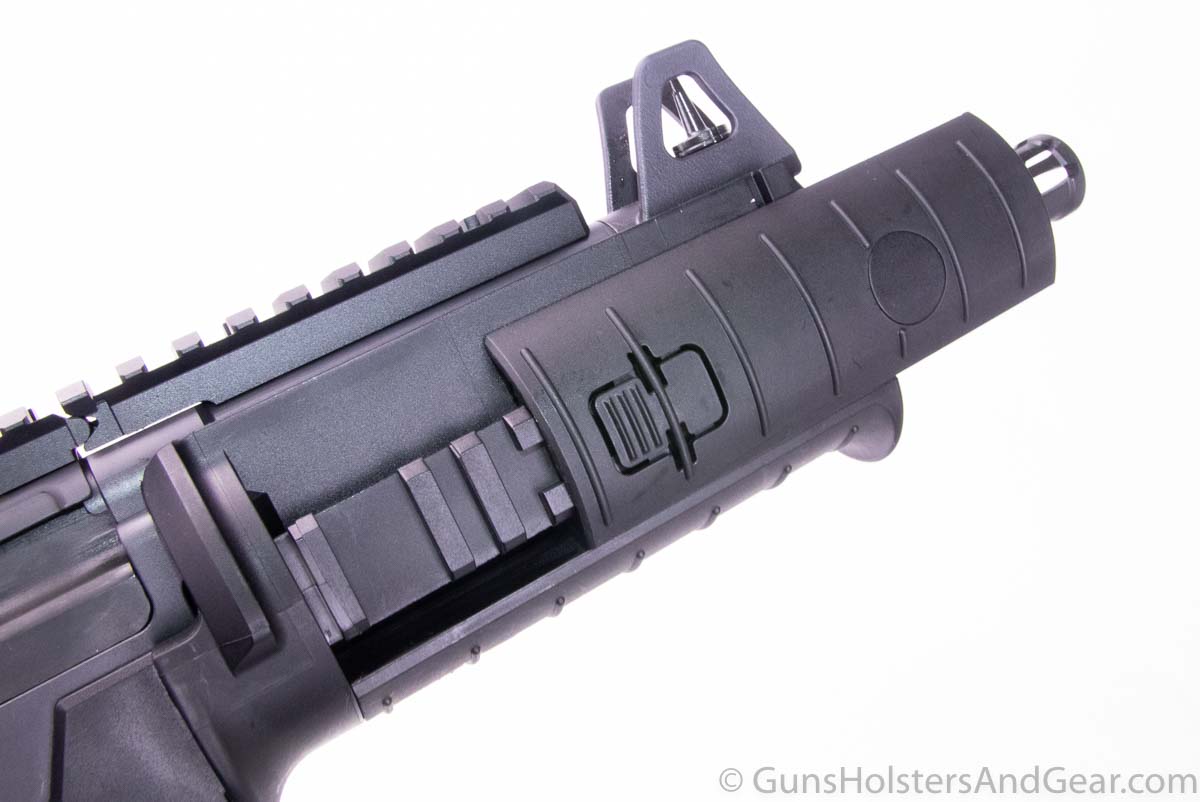 The covers lock into place to provide a comfortable handhold. Removing the rail covers requires you to pivot the release and then slide them off of the front end.

While the covers are on the rails, they are firmly locked into place.

Shooting a gun influenced by a combat rifle can be a mixed bag. Obviously, the Galil ACE platform was designed to be a rugged firearm. But that did not necessarily mean this pistol would be accurate or even enjoyable to shoot.

Fortunately, this gun was an easy shooter with a large dose of fun mixed in. I wasn’t really surprised as I really enjoyed shooting another of the company’s rifles in my IWI Tavor X95 Review. 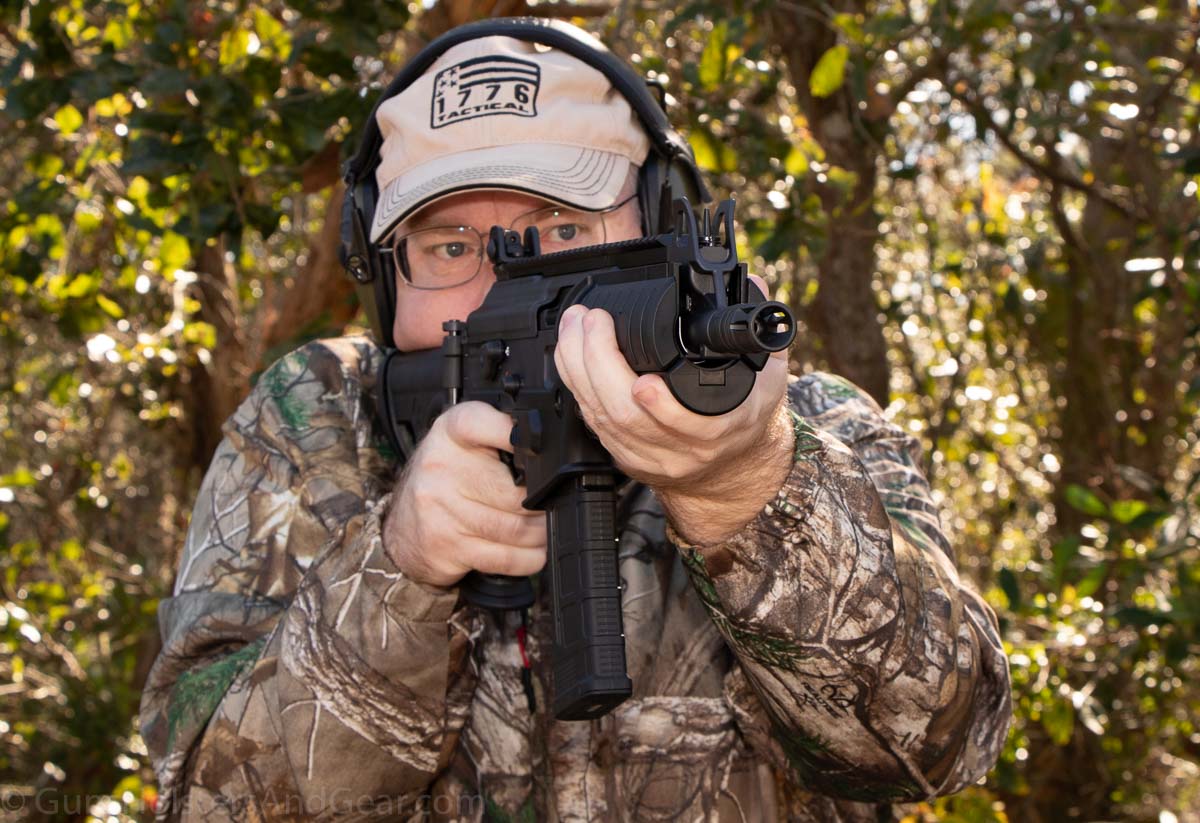 Recoil when shooting a rifle cartridge from a short-barreled firearm can be substantial â€“ even with a relatively mild round like the 5.56 NATO. To me, the recoil and muzzle rise in the Galil ACE seemed no more than that of a 16â€ barreled AR-15. Felt recoil was likely mitigated by the relatively heavy weight of the gun.

Muzzle blast, on the other hand, was substantially greater than that typically experienced with a full-size rifle. The gun produced a daylight visible flash, and there is a good deal more noise with each shot. A muzzle device that directs the blast forward may be a good add-on for this pistol.

One of the special features of this gun is the folding arm brace. As many readers know, the Bureau of Alcohol, Tobacco, Firearms and Explosives (BATFE) has ever-changing opinions on the shouldering of a pistol that has an arm brace. At the time of this writing, the BATFE issued a ruling that seems to say that it is, and always was, legal to shoulder an otherwise lawfully made and installed pistol brace. But, don’t rely on that as legal advice! 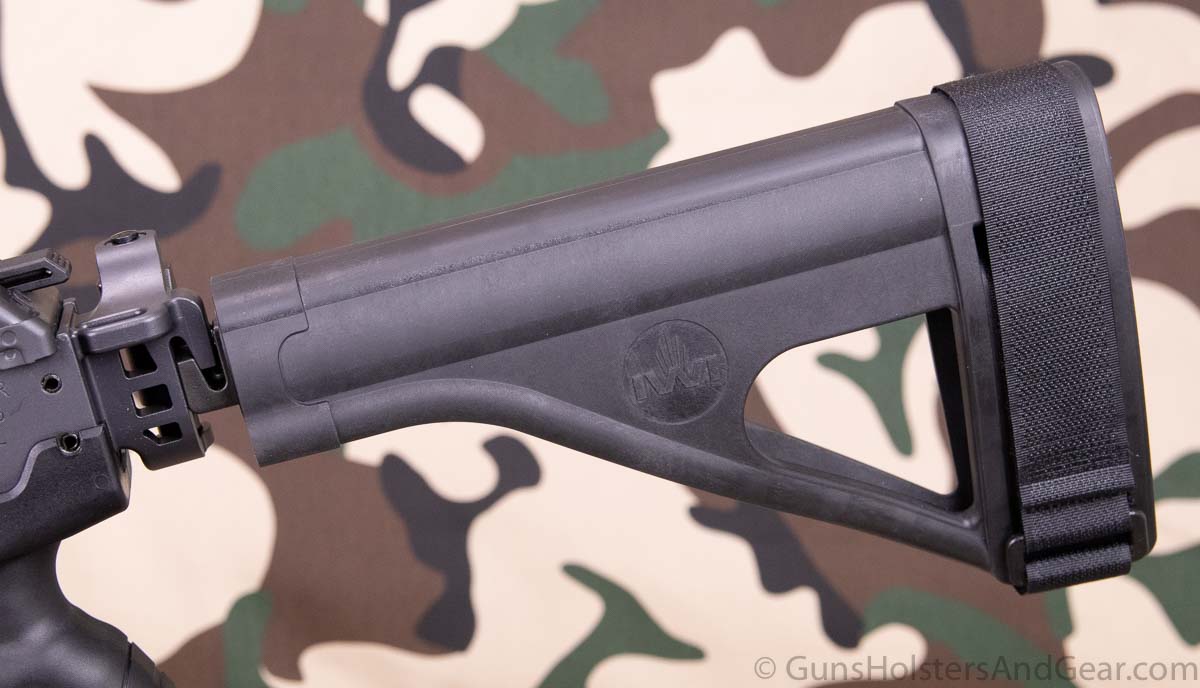 Since bureaucrats are making these decisions, it is very possible that the ruling may be altered in the future. If you wish to shoulder one of these pistols, youâ€™ll hear no objections from me. Just keep in mind that a determination may later make it illegal to do so.

Shooting the pistol while shouldered is certainly possible. While the gun was not designed to be shot using the brace as a stock, it is just barely long enough to do so. But, it is not an ideal mount for me, and I am only six feet tall. For someone larger, it may be too difficult to bother with. 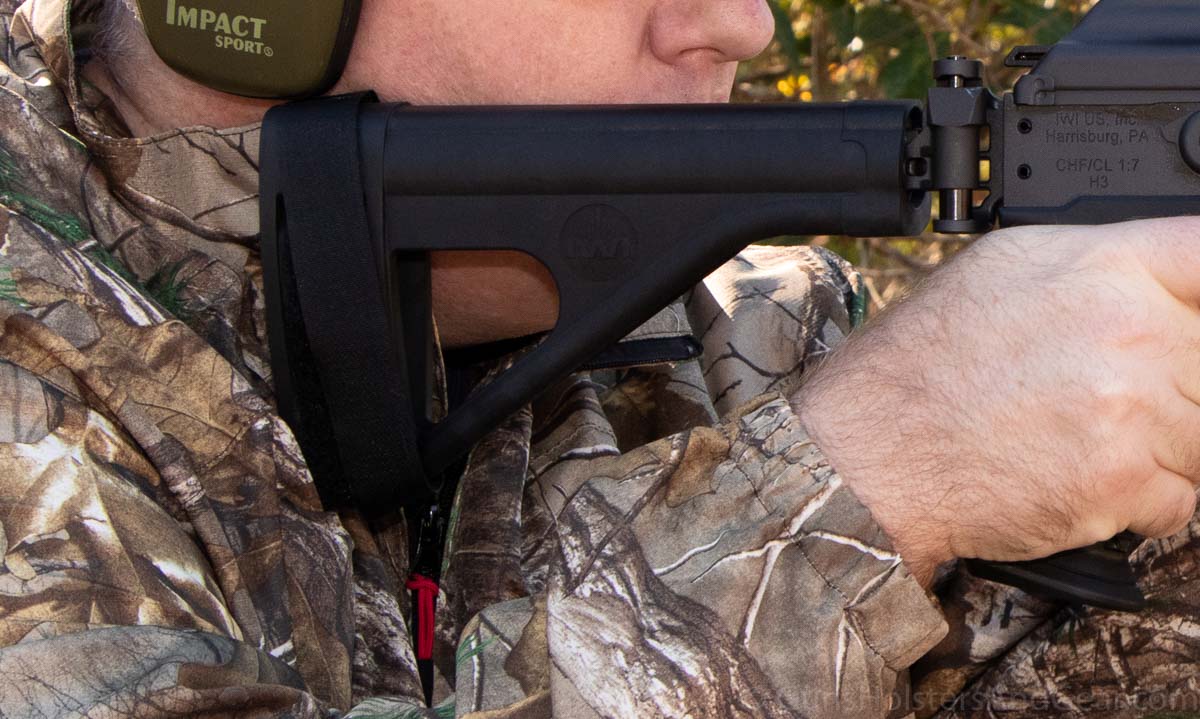 IWI US includes a single 30-round PMAG M3 with the witness window. In addition to the included magazine, I tried several other brands including those from Troy, Lancer, Brownells and HexMag. All of these magazines inserted easily, dropped free and fed reliably in this pistol. I also successfully tested the gun with older second-generation Magpul magazines.

The trigger pull is long and relatively heavy on this pistol. Considering its roots as a mainline battle rifle, Iâ€™m not shocked. However, the rearward pull of the trigger was smooth. For me, a smooth pull is much more important than the weight of the pull. I had no problems controlling the trigger and accurately shooting the gun. 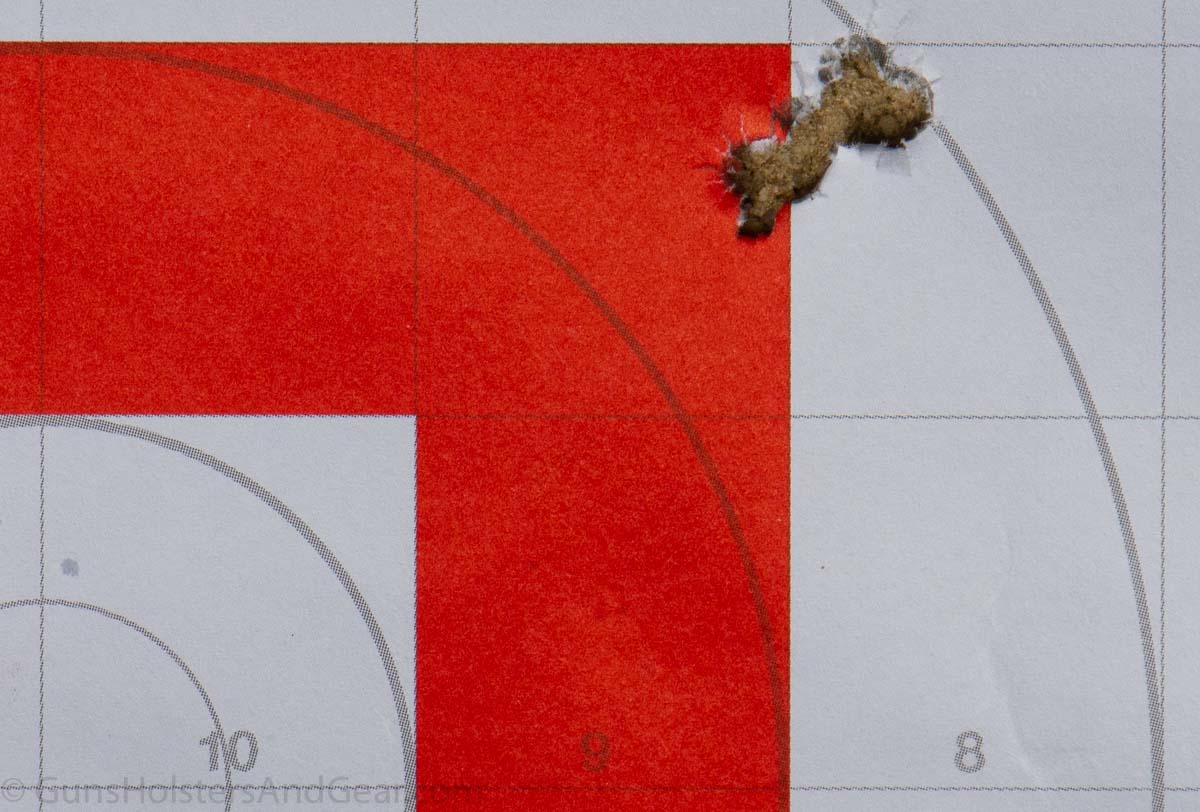 Freestanding, good ammunition would group 5 shots into 1″ or less at 25 yards with the standard sights. From a bench and the use of a low powered scope tightened those up considerably.

In all, I ran about 750 rounds of .223 and 5.56 NATO ammunition through the gun. I encountered no reliability problems at all.


Not surprisingly, the velocity of ammunition fired in the Galil ACE pistol was measurably less than the same ammunition fired from rifle length barrels. In general, shorter barrels lead to slower bullet speeds. There are diminishing returns at both ends of the barrel length spectrum, but moving from a 16â€ carbine to a pistol with roughly half the barrel length will show an obvious drop.

The IWI Galil ACE is a fantastic gun. It is extremely reliable and solidly built. Features like the integral rail covers that form the handguard are well thought out and performed admirably during testing. While Iâ€™ve never had significant concerns about the AR-style pistol design, the Galil ACE seems to be about as bulletproof as one could hope for.

For practical applications, the folding brace on this pistol makes it much easier to store and carry the gun in a backpack or other bag. This makes it a viable option for use in a bail out bag. One of the best reasons to own this firearm is â€œjust because.â€ It is fun to shoot, and what better reason is there to own a gun?

Where to buy the IWI Galil ACE Pistol

All gun reviews should include a full disclosure of any influences that may impact the reviewer. I always include one with mine.

This gun was loaned to me as a test & evaluation (T&E) gun by IWI US. After writing this review, I shipped the gun back to the company. IWI did not pay me to write this review, nor did the company offer any other form of consideration. IWI is not an advertiser.

I have no financial interest in IWI or any other firearms manufacturer. All of the opinions in this article are mine.

Comments and feedback are always welcome. Feel free to chime in with your thoughts. I just ask that you keep things civil and refrain from using profanity. I’m running a family-friendly website.