Ed. note: This SIG P224 review is from the Media Day at the Range at the 2012 SHOT Show. Â Two of our writers, Aaron and Randall, got to spend some time shooting and evaluating the new SIG SAUER pistol.

As Aaron and I wandered down the long dusty row of vendors at 2012 SHOT Show Media Day at the Range, we spied the blue and white Sig Sauer banner. We ducked into a line of writers and fairly giggled to each other, â€œP224!â€

I have wanted to shoot one of these since they were announced. Richard has written some previous articles on the compact SIG P224, so I wonâ€™t retrace his stepsâ€¦

We waited quite some time to reach the front of the line, but it was worth it. I have carried a .40 cal. Sig Sauer P226 or P226R for well over a decade, so I am somewhat familiar with Sigâ€™s work.

The gun available for us to shoot was the P224 Extreme, which is the basic P224 platform with the slide coated in black Nitron and the frame wearing Hogue Piranha G-10 grips. The sights were three-dot SIGLITE night sights.

The P224 we handled was in .40 cal. and had the Double Action Kellerman (DAK) trigger. Obvious comparisons can be made between this gun and the Glock 27. I own and have gotten much use from my G27, so I was ready for the comparison.

Upon holding the P224, the first thing I noticed was the thick, stubby grip. Its width immediately reminded me of the G27. I have small hands, but the P224, which is .12â€ wider than the G27, felt very substantial and comfortable in my hand.

The P224 seemed lighter than its 25.4 ozs, perhaps because I am used to the 34.0 ozs of my P226R. Much like the shocking ad, it just seemed like a full-sized double stack Sig with the two ends cut off.

I stoked the action and fired off a magazine. Recoil was very manageable. This gun weighs 3.67 ozs more than my G27 (both with an unloaded magazine), so I thought muzzle rise was definitely lower for the Sig Sauer over the G27.

I fired off a couple more magazines. There was a large steel plate downrange about 15 yards. I had no trouble driving the bullets into its center.

I think a comparison between the Sig Sauer P224 and Glock 27 is like Apples to BlackBerrys. Those who prefer the heft and feel of an all-metal gun will like the Sig. Ones who want a bit more weight savings and donâ€™t mind polymer with gravitate to the Glock. Theyâ€™ll all get you there in the end.

I really enjoyed shooting the Sig Sauer P224. It functioned flawlessly, despite the fact it had been beaten up by several hundred gunwriters before us. And I guess thatâ€™s a great testimonial in itself. 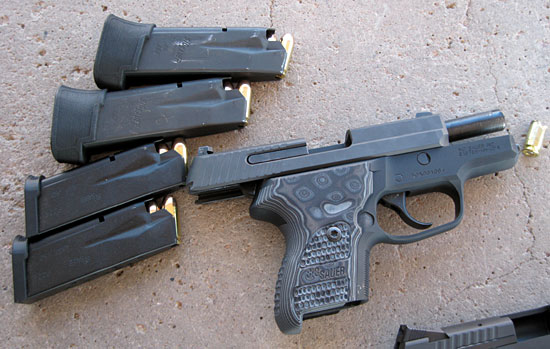 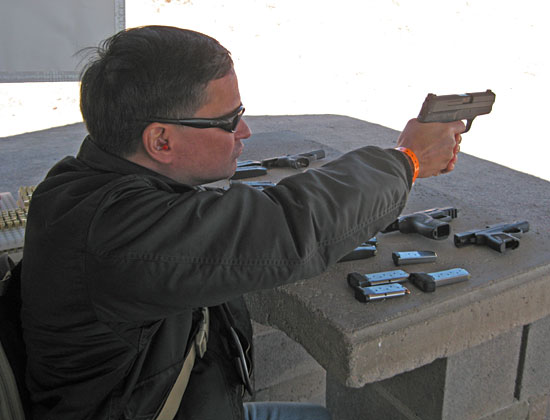