The Smith & Wesson Pro Series CORE pistols were announced several months ago, and they were ready to run at the Media Day event at the SHOT Show this year. Â I had the chance to shoot an M&P9 fitted with a Trijicon RMR sight. Â [Ed. note: Â Check out Paul Carlson’s interview regarding the Trijicon RMR here.]

The three-dot sights were taller than the standard sights so you can co-witness through the optic. Â This is good should something go wrong with the optic in combat or competition. Â The downside is they could be somewhat distracting for some people – nothing that isn’t quickly overcome with training, however. Â I didn’t have any problems with them. 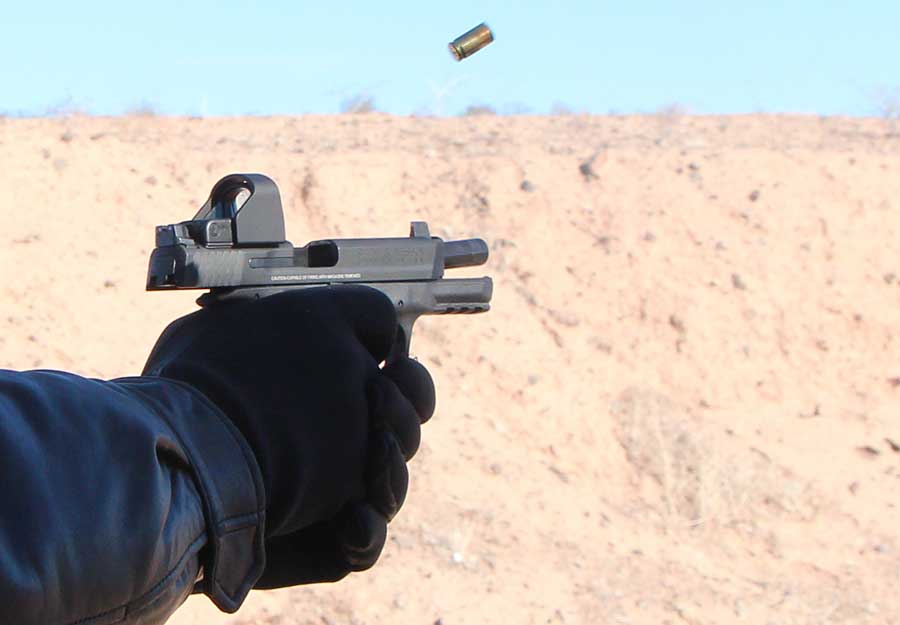 I’ve shot a lot of AR-type rifles with various red dot optics, but I think this was the first pistol I have shot with one. Â The RMR sight worked just as I would expect it to. Â The bright aiming point was easy to see, allowing for fast target acquisition. Â Accuracy was very good with the RMR.

Trijicon has an excellent reputation for building durable optics. Â Friends of mine who have used an ACOG overseas have been very complimentary of the ruggedness are reliability of them. Â The RMR is also supposed to be designed to take a beating (listen to the above interview by Paul Carlson.) Â While a group of writers at Media Day isn’t the harshest thing a RMR is likely to encounter, the guns were certainly being shot a lot. Â Also, the temps were very cold – below freezing when I was shooting. Â Both the gun and the optic ran 100%. 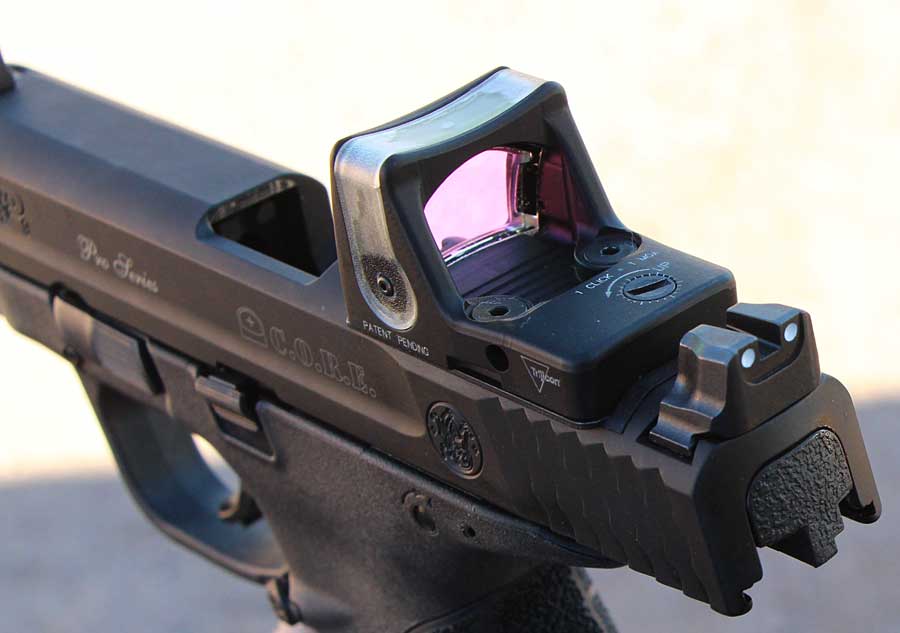 Having an RMR or similar red dot on top of your pistol does add to the overall size of the gun. Â However, I think the benefits may outweigh the drawbacks of a larger package. Â There are a number of kydex holster makers who are already making scabbards for guns fitted with an optic. Â I also saw a new duty holster from Safariland this year designed to accomodate a red dot. Â So, we may be reaching critical mass on pistol optics. 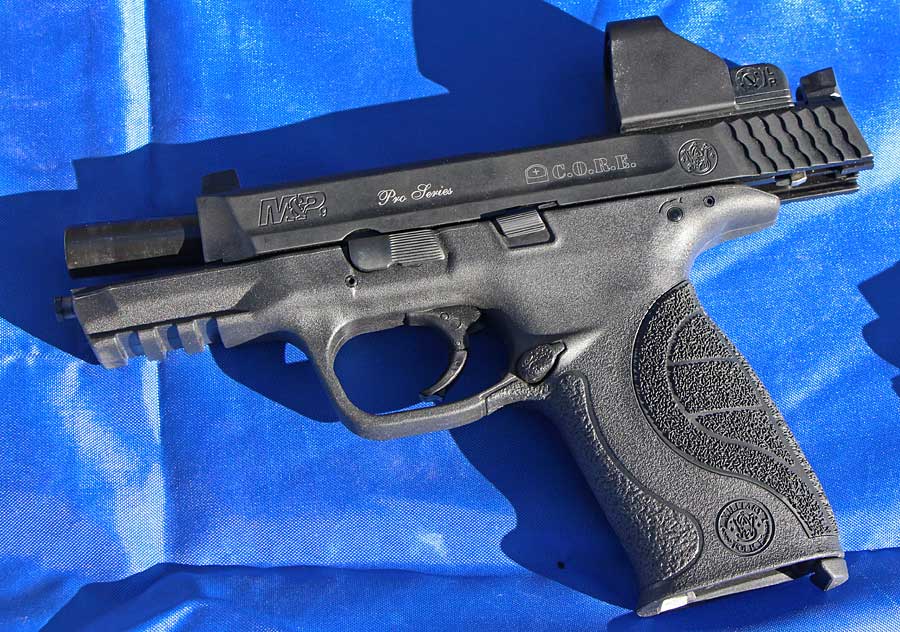 GeneralÂ Information on the CORE pistols 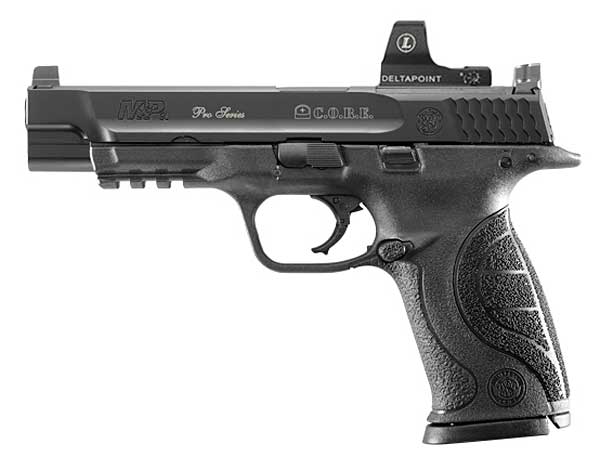 The Smith and Wesson M&P 9mm Pro Series handguns are a performance line of pistols based on the standard M&P platform.Â  The Pro Series is a step between the base 9mm model and the highly-tuned guns coming out of the Performance Center.

There are several different model Pro Series M&P pistols being made.Â  I will describe each of the currently manufactured handguns here. 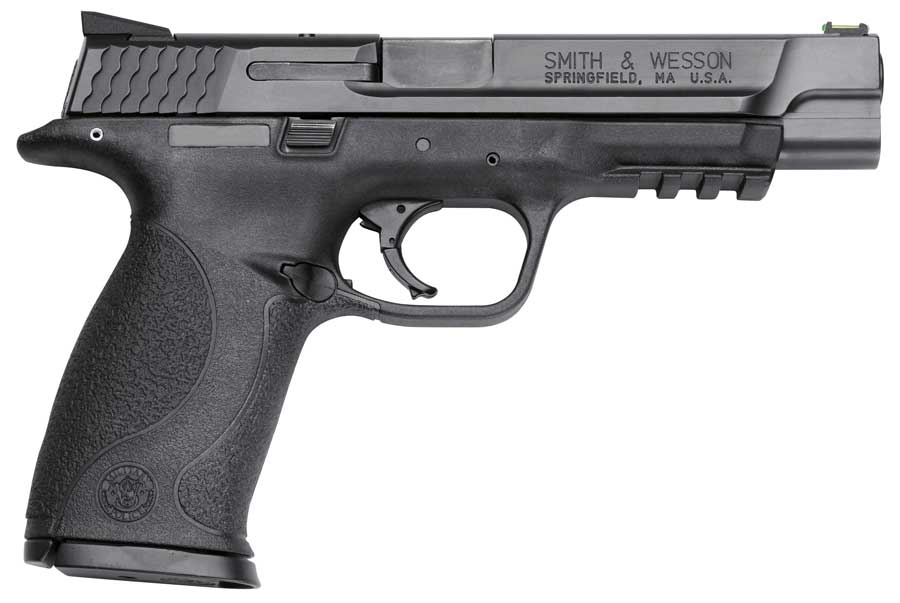 The Smith & Wesson Performance Center has introduced its own custom version of the M&P pistol – the M&P9 Pro Series. Designed with the competitive shooter in mind, this full-size polymer pistol is chambered in 9mm and features a 5-inch barrel with an overall length of 8 Â½ inches.

The competition-ready pistol is particularly well-suited for those shooters planning to participate in the various competitive shooting circuits. The M&P9 Pro Series pistol is standard with a dovetail fiber optic green front sight for faster sight acquisition along with a Novak-designed, reduced glare rear sight. The increased sight radius allows for a more precise sight alignment necessary in competitive shooting scenarios.

The M&P9 Pro Series pistol features a smooth Performance Center 4 to 5 pound trigger pull and is shipped with two 17 round magazines.

The longest running pistol in the Smith and Wesson M&P 9mm Pro Series is the â€œlongslideâ€ version of the M&P9.Â  This gun was introduced in March of 2008.Â  This pistol features a 5â€ barrel (compared to the 4.25â€ of the normal M&P9).Â  In addition to giving the ammunition more velocity, the increased barrel/slide length increases the sight radius, which enhances precision shooting.

The M&P9L is chambered in 9mm and measures 8 Â¼ inches in overall length. The 5-inch barrel offers increased accuracy and makes it a viable choice for competitive shooting.

The M&P9L pistol has a capacity of 17+1 and an empty weight of 25.2 ounces. The striker fired action (SFA) trigger system features a 6 Â½-pound trigger pull and has been designed with an overtravel stop for enhanced performance.

The M&P9L is standard with a steel Lo-Mount carry rear sight.Â This Pro Series longslide eliminates the standard front sight and replaces it with a Novak green fiber optic sight.Â  This sight is much easier to see by the human eye as it is brighter and is a color that sharply contrasts the natural environment.

Both of these pistolsÂ maintain many of the features of the standard model, including the use of 17-round magazines, a 4-5 pound trigger pull, a polymer frame, interchangeable palm swell grips and a black Melonite finished stainless steel slide.Â  The guns are striker fired.

More recently, Smith & Wesson introduced the Pro Series M&P9 C.O.R.E.Â  These â€œCOREâ€ guns are slightly different from the standard Pro Series pistols.Â  First of all, the slide on these handguns are cut to acceptÂ  variety of optics including:

This allows for the easy installation of a holo sight onto your M&P pistol.Â  Red dot sights on pistols are a very good idea, and I am happy to see that Smith and Wesson is the first major gun maker jumping on board with the concept. 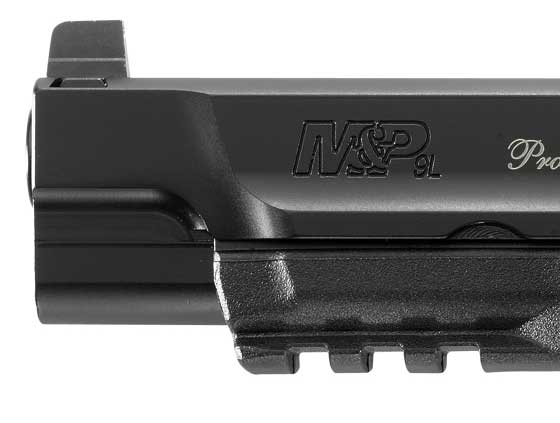 Going with the slide cut for optics is the installation of taller standard sights.Â  Should you need to make a precision shot, or if the glass optic was to fail, the standard iron sights will be there to get you home.

There are also a couple of aesthetic changes to the Pro Series CORE pistols.Â  The first is a slight restyling of the palm swell grips (see the photos on this page) and the addition of â€œC.O.R.E.â€ to the left side of the M&P9â€™s slide.

The new palm swell grips are called â€œNewly Enhanced Textured,â€ or â€œNET,â€ grips.Â  At this writing, it is not known if the grips are going to be standard for all M&P9 pistols going forward, or just for Pro Series handguns.

A second Smith and Wesson M&P 9mm Pro Series C.O.R.E. pistol was introduced, this one being a longslide version of the gun.Â  The M&P9L CORE, as it is sometimes referred to, is much the same as the stadard CORE pistol, but with a 5â€ barrel and increased weight (26.0 ounces v. 24.0 ounces).

The M&P9L CORE takes the same 17-round magazines and can fit any of the above mentioned optics. 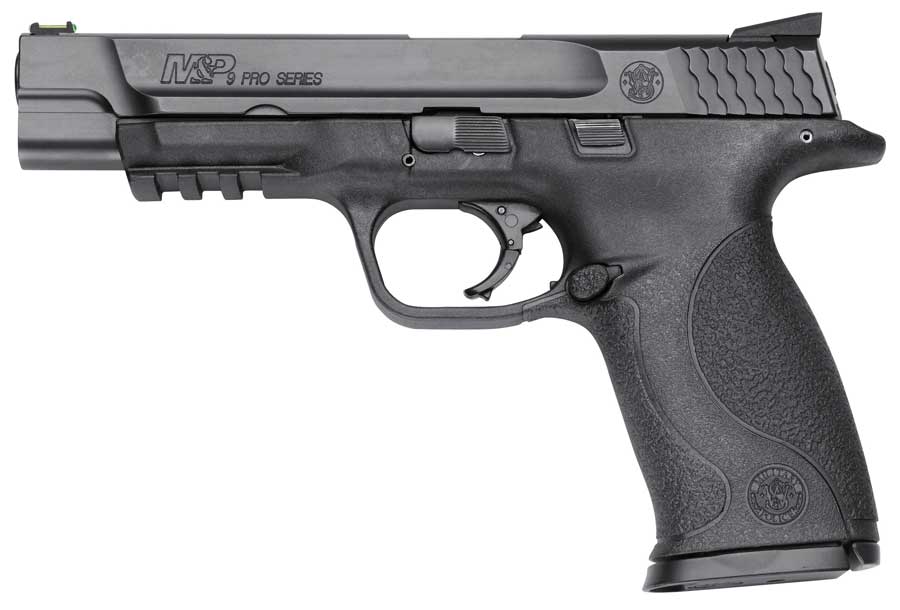 Both of the CORE models are striker fired, have a polymer frame and use a stainless steel slide with a black Melonite finish.Â  Neither of the guns are considered â€œCalifornia compliant.â€

All of the guns in the Smith and Wesson M&P 9mm Pro Series are made in the United States and have a lifetime service policy. You can buy one immediately from Brownells by clicking here.