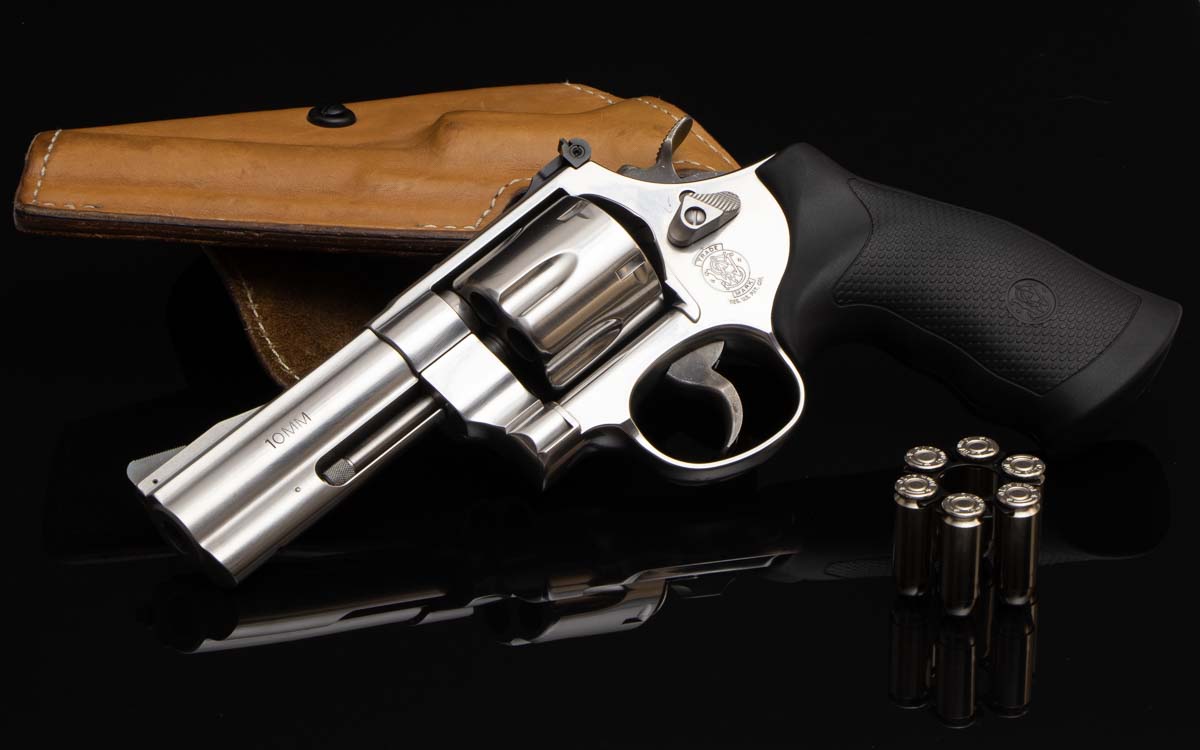 A 10mm revolver is an intriguing choice for self-defense.

With the right ammunition, the gun breathes fire and delivers decisive, man-stopping power. Select another load and it can put dinner on the table.

The key is, of course, finding the right gun to launch these projectiles.

In this Smith & Wesson Model 610 review, I take a look at a 4″ barrel gun and its suitability for personal protection. I also test the performance of 10 different 10mm and .40 S&W loads and post the results (scroll down).

Let’s not waste any more time…

The Model 610 is a full-sized revolver chambered for the 10mm Auto cartridge. It uses full moon clips to hold the cartridges in place and for easy extraction. With the moon clips, you can also shoot .40 S&W rounds through the gun. 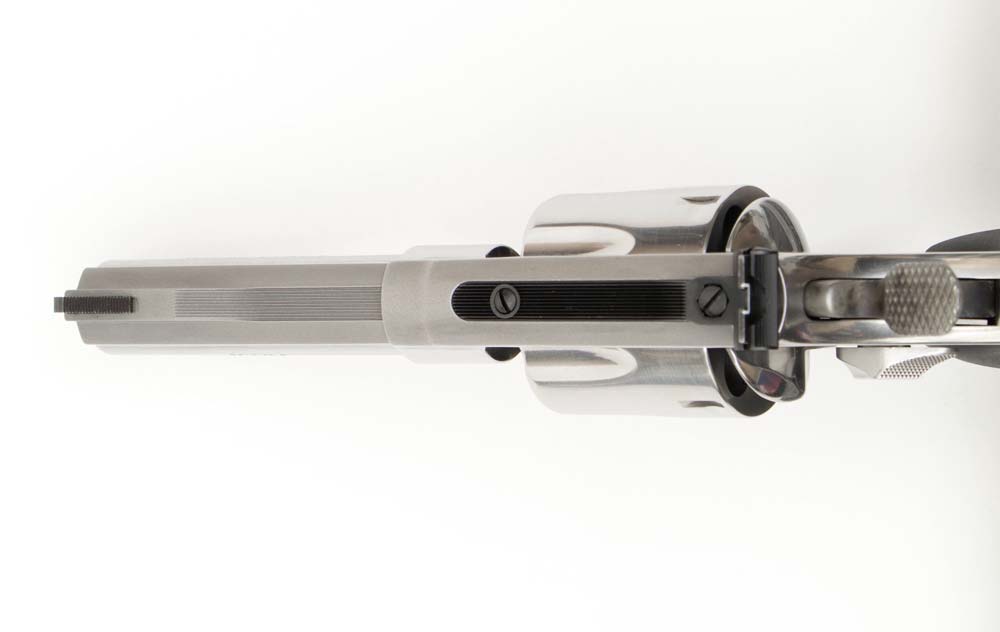 Smith & Wesson builds this 6-shot wheelgun on the large N-frame for excellent strength and durability. Further, the barrel, frame and cylinder are all made of stainless steel to enhance its resistance to corrosion.

From the factory, the gun comes fitted with Smith & Wesson branded synthetic grips. The two-piece grips cover the backstrap to cushion the impact of full power loads.

This gun has a round butt, so most (all) of the current grip manufacturers support replacements if you want to upgrade to premium wood or a softer rubber. If you prefer a square butt, VZ Grips offers a number of “round to square conversion” grips for the N-frame.

On top, Smith & Wesson has a black, serrated blade front sight. An adjustable rear leaf-style sight allows you to dial in shot placement. The front sight is pinned in case you want something brighter up front. 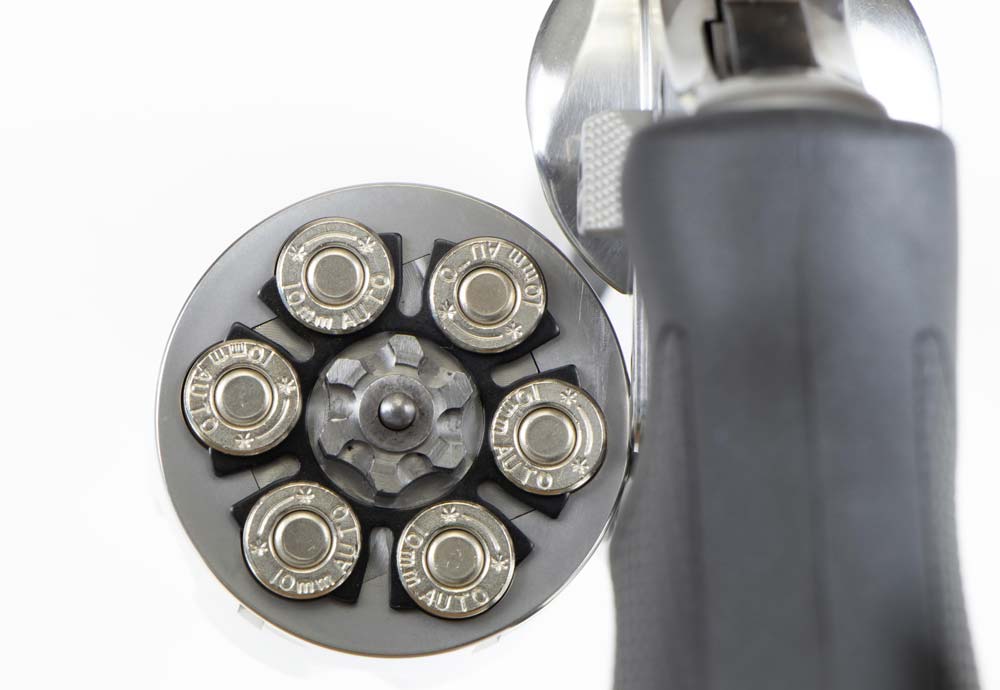 S&W includes three full moon clips with the gun. They work with both 10mm and .40 S&W rounds.

And before anyone asks – yes, it does have an internal lock.

Shooting 10mm from a revolver is not a new concept. In fact, the Model 610 isn’t really a new gun either.

The first Model 610 rolled off the assembly line back in 1989 according to The Standard Catalog of Smith & Wesson. Like the gun I am reviewing, it shot both 10mm and the (then) new .40 S&W cartridge when it was introduced in 1990. The manufacturing of this gun continued through 2001 when it was dropped from the company catalog. However, in 2008 the gun returned to the catalog albeit briefly.

I’ve heard a number of people complain about the recoil produced by the 10mm Auto cartridge. Even though I’ve never had any issues with it, recoil is one of the reasons cited by people when discussing why the FBI moved away from the cartridge in the early 90s.

I mention all of this to say that the recoil from the Model 610 was somewhere between mild and moderate. I’m guessing that the relatively large frame gives this gun enough mass to soak up much of the felt recoil. Regardless of the reason, the gun was exceedingly pleasant to shoot. 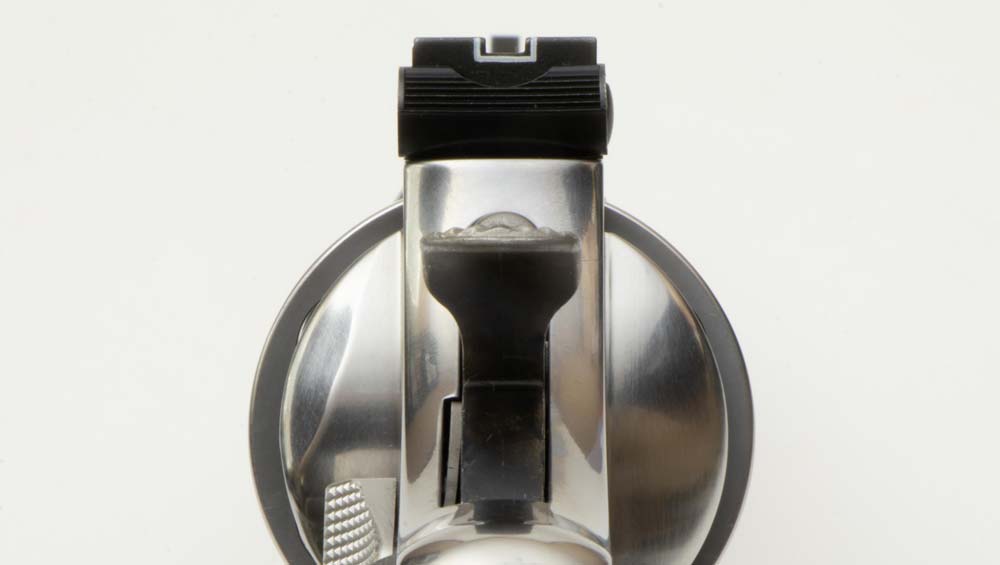 The sights proved to be adequate for handgun ranges. I have always been a fan of the red inserts that Smith & Wesson used on its Combat Magnums and wish the company would have used this on this revolver.

As I wrote above, the front sight is pinned. If the gun was mine, I’m certain I would swap out for something a little more visible for fast acquisition under stress.

For target shooting, the sights were good. The ramp squared up nicely in the rear notch for a classic silhouette on the target.

In my experience, factory triggers from Smith & Wesson suffered for a period in the late 90s to early 2000s. I’ve found that most of the company’s triggers after about 2008 are smooth and reliable. Such was the case for the Model 610 I reviewed.

It was a bit heavy on the double-action (DA) pull – roughly 13-14 pounds. My digital scale will only measure to 12 pounds and the pull weight exceeded that. Nevertheless, I had no problem smoothly rolling the trigger back for accurate DA shooting.

You might expect the single-action (SA) pull to be lighter and crisper. You’d be right. I measured it at 3.8 pounds with my Lyman trigger pull scale. It was very crisp with no creep. 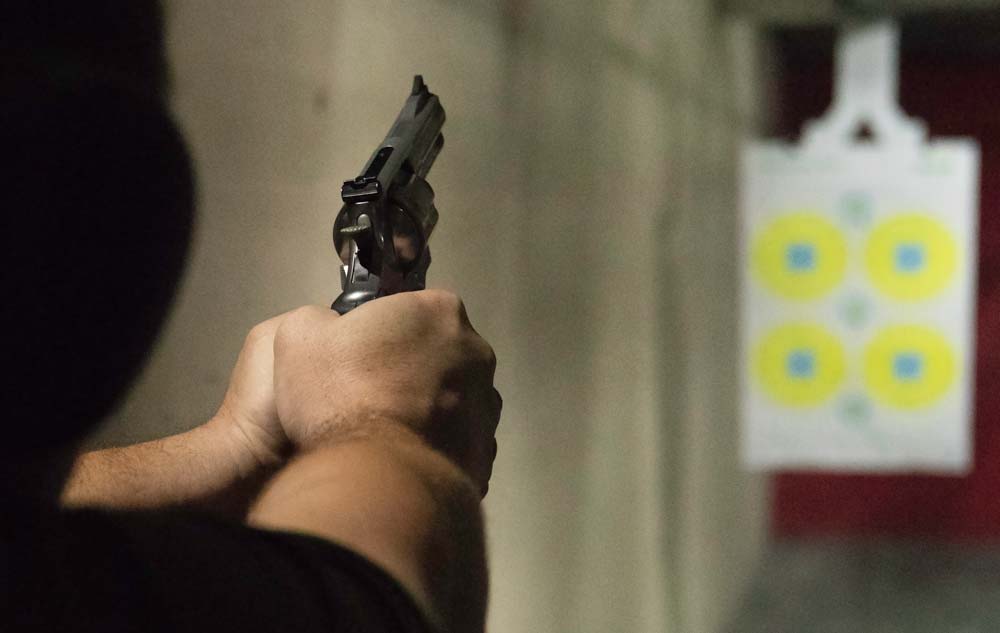 While at the range, I ran some factory 10mm and .40 S&W loads across a chronograph.


While most people will probably stoke their gun with 10mm rounds for protection, .40 S&W rounds are much cheaper to shoot in this handgun.

Much like shooting .38 Special from a .357 Magnum, you may want to shoot inexpensive .40 FMJ rounds through the gun for practice.

However, you can also run serious .40 caliber self-defense loads in this wheelgun. It may be the only thing you can find locally, or maybe you just like the reduced recoil.

Whatever your reason, here’s how they performed:


A few things jump out at me. Even though the felt recoil between the 10mm and .40 S&W was very similar, the 10mm clearly produced faster velocities and higher levels of bullet energy.

However, that shouldn’t discount the use of .40 S&W in the Model 610 for self-defense purposes. The 155-grain JHP Gold Dot load from Speer is an effective defensive round. Not only does it perform well in controlled gelatin testing; I’ve also seen how well it performs in field conditions. It is one of the most effective handgun rounds I’ve come across for stopping attackers. 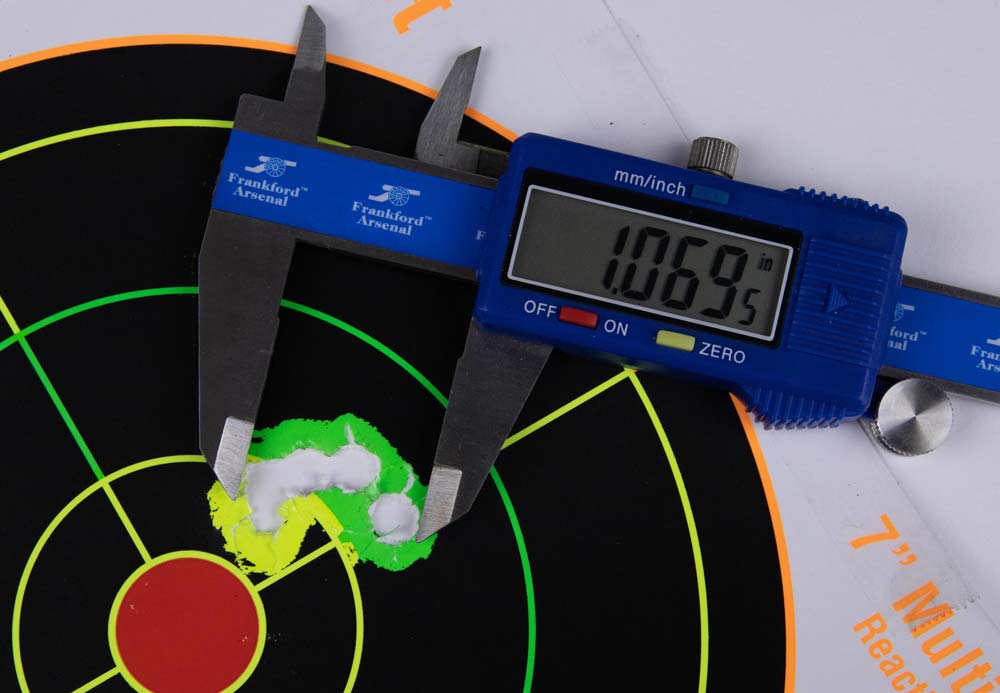 In this 4″ revolver, the 155-grain Speer load averaged almost 1,200 fps for calculated energy levels approaching 500 ft-lbs. This is impressive. I wish the company made a 155-grain version of its 10mm load. A 155-grain bullet at 1,325 fps would make more than 600 ft-lbs of energy. I imagine that could make for an effective hog round.

The other thing that impressed me was the Liberty Ammunition 10mm load. Averaging more than 2,400 fps, the round approached 800 ft-lbs of energy. Frankly, that is in the realm of short barrel rifle load velocities. If I was shooting this round from the 6.5″ barrel version of the Model 610, I have no doubt this gun would exceed 2,500 fps – maybe even more.

I spoke with a Liberty Ammunition representative about this 10mm load. He advised the company recently tested the load in a carbine and averaged more than 2,860 fps. That’s nearly 1,100 ft-lbs of energy from a round that kicks less than a .223. Very interesting.

Is a Revolver a Good Gun for Concealed Carry?

In an age of bottom feeders (semi-auto pistols fed from a magazine), does the wheelgun still make sense for self-defense? 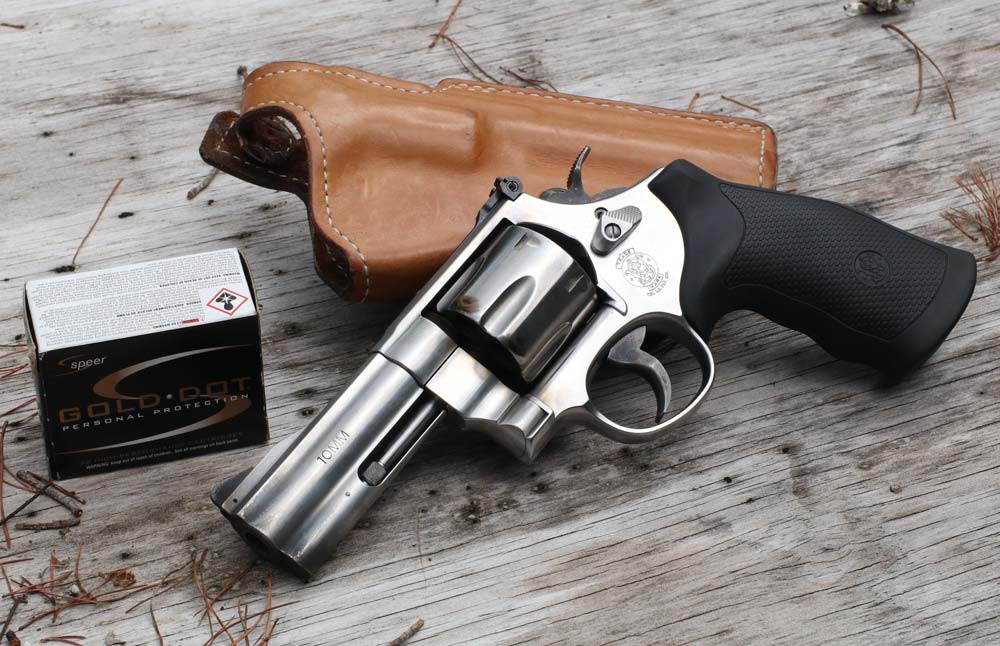 Historical evidence shows that double-action revolvers have worked for soldiers, cops and armed citizens for more than a century. Even if you believe that a Glock or SIG SAUER may offer advantages over a 6-shooter, you cannot claim that a revolver is ineffective as a defensive tool.

Assuming you are selecting from only quality firearms and using reputable ammunition, the only thing you should worry about is finding a gun that works well in your hand and circumstances.

Analysis of more than 1,000 self-defense shootings by John Corriea of ASP indicates that very, very few lethal force encounters use more rounds than a revolver holds. The real key to surviving a violent attack is tactics and training, not which caliber or shooting platform you use (again assuming you are using quality firearms and ammunition.)

If you like revolvers – and I know I do – carry one.

Like any other firearm, I recommend getting good quality training with them. However, finding a quality revolver instructor is tougher than you think. 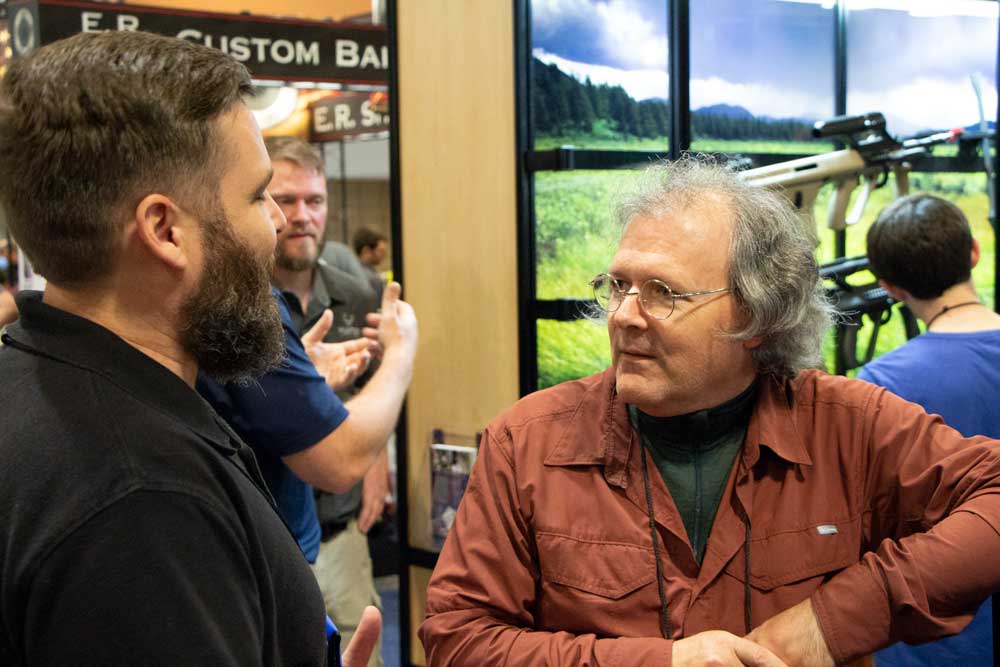 At the top of my list are two people: Grant Cunningham and Massad Ayoob.

Cunningham offers specialized revolver training and even wrote Defensive Revolver Fundamentals. Cunningham is a top notch thinker and trainer with decades of experience. He’s not some hot head with a training certificate whose ink hasn’t even dried. Check out his classes here.

At more than 2.6 pounds (unloaded), the gun requires a quality holster and belt. There are a wide range of rigs on the market and nearly any 4″ N-frame holster should work. For revolvers, I remain partial to leather but you can get a good holster in Kydex also.

In this Smith & Wesson Model 610 review, I examined the gun from a self-defense perspective. In that regard, I think this is a great gun. Loaded with either 10mm or .40 S&W self-defense loads, this gun provides excellent performance. 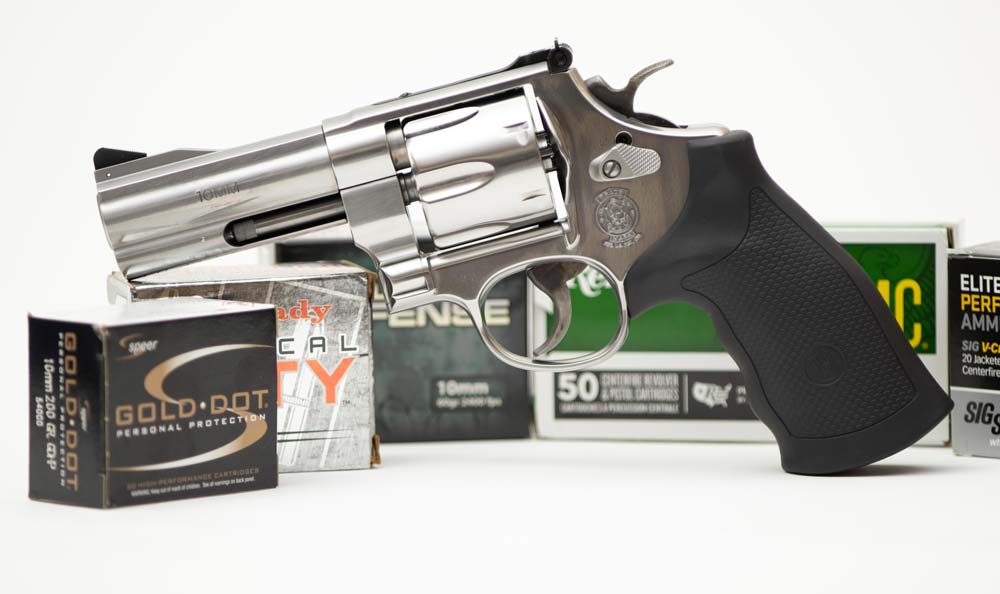 I found the gun comfortable to shoot without any of the recoil you might associate with overblown gunshop commentary on “hand cannons.”

At nearly $1k, the gun does have a hefty price tag. However, it is a high-quality machine that is likely to run for years longer than you or I will be around. In other words, it’s a gun you can use today and your kids and grandkids will enjoy for decades to come.

If you are interested in one of these guns, may I ask that you use one of my affiliate links to make your purchase? Testing guns isn’t cheap and takes a lot of time. The commission from a sale helps to balance the books.

The Smith & Wesson Model 610 was an excellent shooter with a good trigger, excellent accuracy and modest recoil. While the price tag isn’t for the budget-minded, the gun is a quality revolver that should last a lifetime of regular shooting.

Smith & Wesson loaned me the Model 610 revolver reviewed here. At the end of the review, I returned the gun. No one at Smith & Wesson requested a positive review, and I made no promises for one. Smith & Wesson did not pay me to write this review.

I have no financial interest in any gun manufacturer. All of the opinions expressed here are my own.

If you have any questions or thoughts about this review, please leave a comment below. I request that all comments maintain a civil tone. I operate a family-friendly site.

I am considering either a SW 786 6 inch barrel in 357 mag or a 610 in 6 inch 10mm for deer hunting in Indiana. My maximum attempt at shooting range is 20 yards based on my ability’s, not the guns. Do you have an opinion on which might have more advantages over the other? I will wear hearing protection while hunting and practicing as I am sensitive to muzzle blast. Thank you.

I think both guns are good options. Both will do the job for deer at 20 yards. Of the two, the 10mm seems to have less of a sharp muzzle blast to me. However, the .357 traditionally offers more variety in ammunition loads. I always recommend ear pro – electronic can work very well for hunting. Good luck on the hunting!