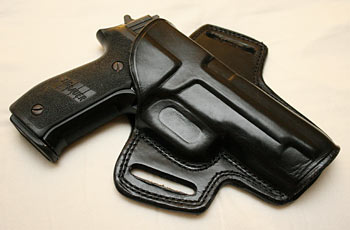 This is a Tagua holster review based on my privately owned scabbard for the SIG P226. Â Many holsters are an exercise in compromise. The wearer has to balance comfort, durability, concealablity, security, and price to find the ‘right’ holster. Many people have a box, drawer, or closet full of holsters that are right for certain occasions, modes of dress, or handgun, and still more that turned out not to work as well as the purchaser had hoped.

I recently picked up a open top, belt holster for my Sig Sauer P226 made by Tagua Gunleather. I have seen Tagua products popping up at some of the local gunshops, and the pricing on the Tagua products is fairly aggressive. I wanted to test one to see how well they would work for daily carry. 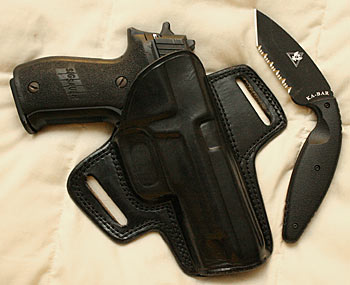 Tagua holsters are hand-made in Paraguay using vegetable tanned cowhide. My example was nicely double-stitched along all seams and the leather had a pleasant, smooth finish both on the exterior and interior portions of the holster. The belt slots were wide enough to accept up to a 1 1/2″ belt.

The leather piece next to the wearer’s body was about twice as thick as the leather piece that covers the outside portion of the firearm. The open top was not reinforced to prevent the mouth of the holster from collapsing, however the form molding of the leather kept the mouth open even when tightly belted on. I had no problems accomplishing a one-handed reholster. I did, however, have an issue with the non-reinforced mouth that is discussed below.

The holster fit my standard P226 well out of the package. The gun in the holster, as expected, was a bit tight initially, but I allowed the pistol to stay in the holster a couple of days, and now the gun draws very smoothly from the holster.

Initially, I did have a problem with inserting the firearm into the holster. This is due to the slide release on the Sig catching the inside piece of leather. After several days of the holster stretching to the gun, and multiple drawing/dry firing exercises, the gun now re-holsters smoothly, rarely catching on the slide release. It would appear that Tagua could apply a small amount of thinning in the leather at this point to solve this problem.

I wore the holster for several weeks. The holster wore well, and was comfortable. I used a 1 1/4″ belt and was pleased that the holster kept the gun snug to my side and did not shift around during the day. As with any outside the waistband holsters, I was careful to wear covering garments long enough to cover the end of the holster. I did not have any problems concealing the bulk of the Sig P226.

The only significant fault I could find with the holster is the lack of hard, reinforced mouth. Three times I activated the magazine release while moving the holster, causing the magazine to pop loose. Each time, I had grabbed the holster from the rear, while the holster was on my belt and the gun was in the holster. My thumb, it would seem, applied enough pressure to the exterior of the holster to activate the mag release. This was a significant concern for me, as I have never encountered a similar problem with any of my other holsters.

I paid a little over $40 for my Tagua Gunleather holster. I have seen the same holster selling for about $36-42 on some websites. Overall, I think the quality and comfort of the holster is very good for this price point. However, I would be happier paying additional money for a version with a hard reinforced top that would not catch the slide release and would not allow me to dump the magazine when I re-adjust the holster on my belt. Â Please post your experiences or feedback on my Tagua holster review in the comments section below.