The Ruger LCR was introduced at the 2009 SHOT Show in Orlando, FL. Â The LCR, or Light Compact Revolver, was the first production wheelgun made with a polymer frame. Â Since then, other manufacturers including Smith & Wesson and Taurus, have made revolvers with a polymer frame.

Truth be known, the entire frame of this handgun is not polymer. The frame is a combination of polymer and metal, but with a significant enough portion being plastic for most people to consider the gun to have a polymer frame.

Since the first one was introduced, Ruger released versions of the gun in .357 Magnum, .22 LR and .22 WMR. Rumors of a six-shot LCR chambered in .327 Federal Magnum have not yet materialized.

The original LCR was chambered for the .38 Special and is +P rated. Â It is a five-shot revolver with a polymer and aluminum frame. Â The barrel and cylinder are made of stainless steel. 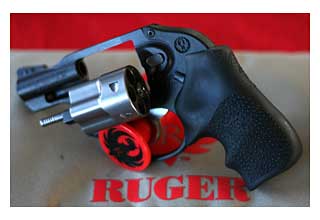 The new revolver has a unique cam system in the fire control system. Â The cam gives the Ruger one of the smoothest trigger pulls on a production handgun. Â The LCR is double-action-only.

Sights on the wheelgun are much better than the standard alternatives on many pocket revolvers. Â The front sight is large and easy to pick up in low light. Â The front sight is also pinned, meaning that it can be easily replaced with a different front sight should the owner wish to do so. Â Various aftermarket sights, like those from XS Sight Systems are available for the this Ruger revolver. 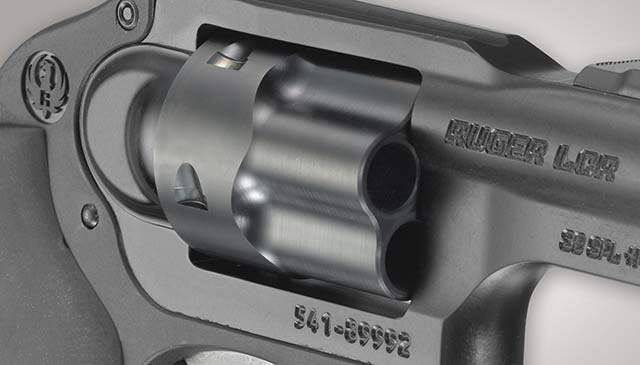 One of the amazing things about the LCR is the relatively light recoil it produces when compared to other small frame revolvers. Â There are several theories about why causes the reduction in recoil, but many people believe the LCR’s polymer frame flexes slightly under recoil, absorbing the worst part of the recoil impulse.

After its initial introduction, several new models in this line of revolvers were released by Ruger including models chambered in .357 Magnum, .22 LR and .22 WMR (aka 22 Magnum). Â Additionally, Ruger brought out variations of the original .38 Special model, including a LCR with boot grips, a model with factory installed Crimson Trace LaserGrips and a model with a pre-installed XS Big Dot front sight. Â The boot grip model has since been discontinued as a factory option. 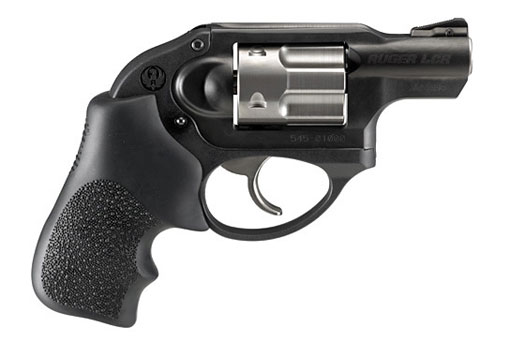 In mid-2010, Ruger officially announced the LCR 357. Â The revolver is a small, compact revolver that shares many of the same design characteristics of the original LCR, but chambered for the more powerful .357 Magnum.

The LCR 357 is slightly heavier than the original LCR revolver, but otherwise is very similar. Â The weight of the LCR 357 is up 3.6 ounces when compared to the original, but the overall length remains the same.

The LCR 357 can also be customized by the owner in the same ways the first gun could. Â The front sight is pinned and the grips can be upgraded to a variety of custom options including LaserGrips from Crimson Trace. 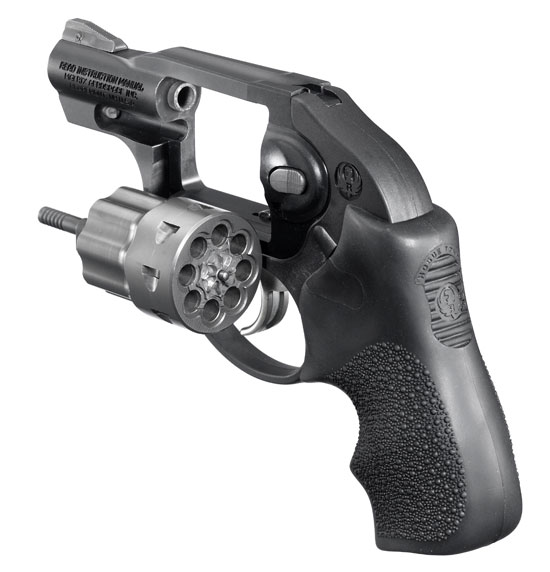 In late 2011, the Ruger LCR 22 was announced. Â The LCR 22 is the same style revolver, but now chambered in .22 LR. Â The .22 LR is an inexpensive rimfire cartridge with little recoil, making this gun good for training and as a kit or trail gun.

Like the other versions, this model also has a pinned front sight and polymer frame.

Expanding the rimfire offerings for this revolver, Ruger introduced a 22 WMR model just ahead of the 2013 SHOT Show. Â The 22 WMR, also known as the 22 Magnum or 22 Winchester Magnum Rimfire, is an interesting option for self defense.

While many people would suggest that a 22 is not acceptable for self defense, it cannot be ignored that some people are physically unable to handle much recoil. Â Due to illness or disability, many people cannot handle the relatively mild recoil of a .38 Special. Â For these people the 22 Magnum offers an alternative. It hits harder than a .22 LR cartridge, but generates a lot less recoil than a centerfire self-defense load. Â And with ammo like the Hornady Critical Defense available in 22 WMR, this gun might make an ideal personal protection weapon. 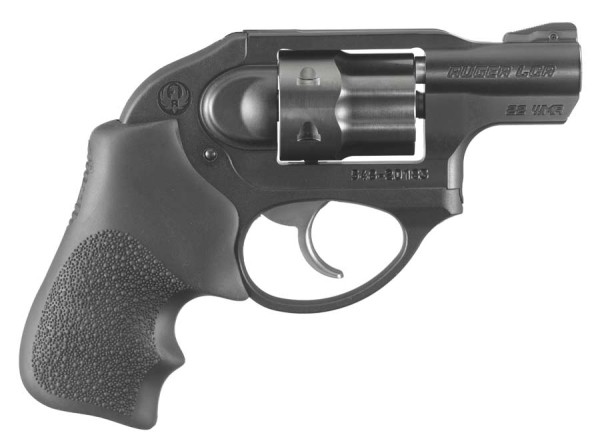 Here are a selection of videos on the Ruger LCR, including the original introductory ad released by the company for the new revolver in 2009.

Here are a collection of photos for this revolver. Â Some of these are product shots provided by Ruger, while others are originals taken by writers for this site. A few of the photos are of models no longer being made. Â In other words, some of these guns you may not see anywhere else. 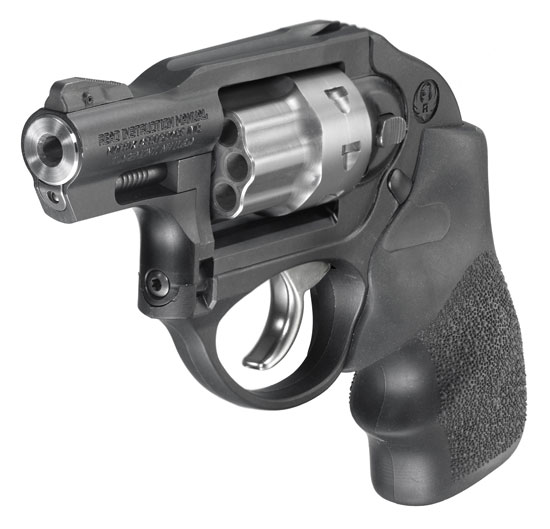 The below photo is a LCR model that is no longer offered. Â It came with “boot” grips, which were designed to be a little better for ankle carry. Â The gun also came with a tritium powered front night sight. Â Although no longer being made, you can still buy a LCR with a tritium front sight.

In the below photograph, the revolver on the left has a Hi Viz fiber optic sight installed on it. Â The fiver optic pipe gathers light to make a bright, glowing dot on the end of the barrel for accurate fire in stress conditions. Â The sight on the right is a XS Sights front sight. Â XS uses a large white dot with a tritium vial in the center for low light conditions. 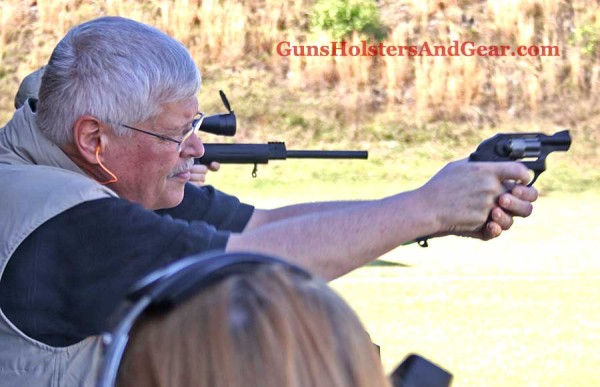 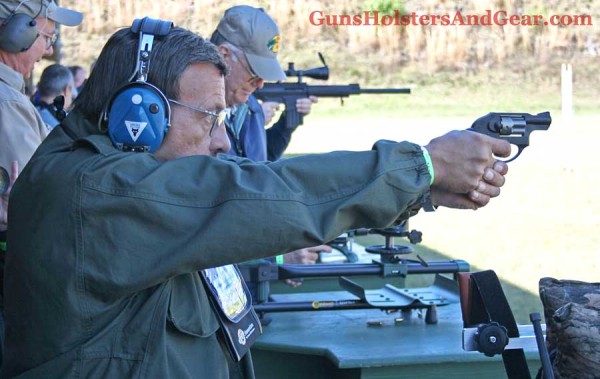 […] The gun was the Ruger LCR. I don’t know if it was quite the show stopper that Bane claimed, but it certainly was […]