If you’ve ever thought about burying ammo, a gun or any valuables for long-term storage, the MTM Case-Gard Survivor Ammo Can is a product that is worth considering. Â It is a nearly complete system to store ammo, a few handguns, money or other valuables.

In this MTM Survivor Ammo Can review, I will describe the product and then conduct a long-term evaluation of the can. Â Farther down in the article, I will describe exactly how this testing will be done. 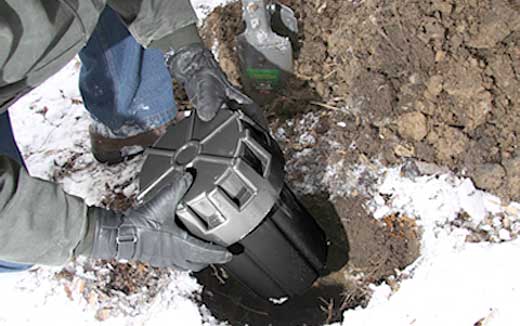 MTM Case-Gard has taken some of the work out of preparing gear for long term, underground storage in this single kit. Â Sure, you can build your own storage container with PCV, cement and a hack-saw, but this kit is ready to go as is.

The kit comes with: 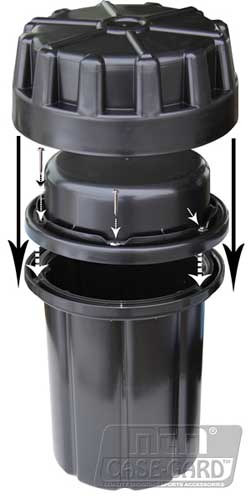 All of the parts seem to be good quality. Â The easy-to-follow instructions are affixed to the inside and outside of the inner lid. Â The illustrated instructions on the top of the lid help ensure you correctly position the washers and not over-tighten the screws

Essentially, you would take the items you want to pack and place them in the corrosion inhibiting bag. Â You would then toss in the desiccant pack and close it with a included twist tie.

With the bag in the bottom portion of the can, you then seal the inner lid to the canister using the included screws and rubber backed washers. Â This inner lid has two o-rings on the inside – one on either side of the screws.

Depending on what you are storing, coating the stored items in cosmoline or another rust inhibitor is probably a good idea as well. That is the only thing that does not come in the kit that I would want to add. Â MSRP is $29.99. I got mine cheaper elsewhere.

MTM Case-Gard lists theÂ Survivor Ammo Can as having an internal diameter of 7″ and an internal height of 12.4″. Â The can may have a slight taper from top to bottom, but if so, it is very limited.

The can is large enough to hold several hundred rounds of ammo in boxes, more if loose packed. Â Boxes create a lot of dead space, so I would definitely recommend packing the ammo in bags, not the original boxes. Â Bags can also offer additional protection from moisture.

Several handguns can be stored in the can – the exact number is very dependent on how large the guns are. Â I was able to easily fit all of these pistols into a single can: SIG P226, Glock 19, Smith & Wesson SD40, Smith & Wesson M&P, Smith & Wesson 642 and a Kahr CW9.

Packing two full size handguns, a couple of extra magazines, and 200+ rounds in one can is very doable. Â The cans do not look large, but you would have room left over with this load.

MTM states the can will hold 500 rounds of .223/5.56, 500 rounds of .45 ACP or 16 metal 30-round AR-15 magazines. Â It is tempting to load the AR mags with ammo to maximize space utilization, but I would be worried about springs being weakened if they were stored for a long period of time.

The can is not large enough to store a rifle. Â One of the more compact rifles (for storage) I can think of is the Henry AR-7 survival rifle. Â Completely broken down, the gun is 16.5″ long, several inches longer that the interior height of the can. 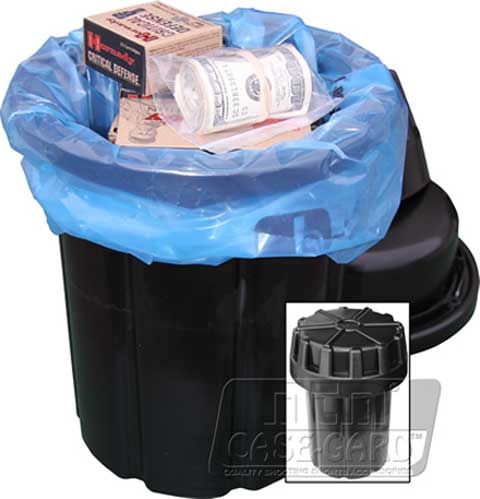 I live in Florida, which presents certain problems with burying guns for storage. Â We get a lot of rain and localized flooding. Â On the other hand, the ground is never frozen, so we do not have the problems associated with frost heaving in the winter.

I have several AK-47 80% receiver blanks on hand. Â I will include several of these in the can, each prepared in different ways. Â Also, I will include brass cased and steel cased ammo. Â I will also include some paper documents and (depending on how much room I have left) some silver or other items.

I will bury theÂ Survivor Ammo Can in my back yard, which is very sandy soil and on a slight grade. Â After several months, I will retrieve the can and see what everything looks like. Â A longer term test would be even better, but I suspect if water will penetrate the can, it will be very soon or not at all.

Stay tuned and I will update this review as the process goes along. Â If you have any suggestions for the evaluation, sound off in the comments below.

I believe this is going to be a very good storage container, and I have high expectations for its performance. Â If you think you might want one of these, click here to get your MTM Survivor Ammo Can from Amazon.

Update #1: Sealing and Burying the Can 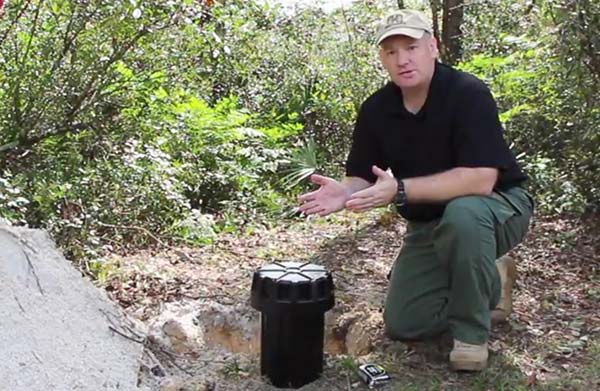 Looking for an easy way to store, hide or cache guns, ammo or other gear?Â  The MTM Case-Gard Survivor Ammo Can might be just the thing you are looking for.

In a previous article, I gave you a quick review on this burial vault.Â  For this installment, I made a video of me assembling the can and burying it on my property.Â  I included in the can a new Springfield XD magazine, an unfinished AK-47 80% receiver, Wolf 7.62×39 steel cased ammo, and Russian surplus 7.62x54r ammo.

I only plan on having the ammo can buried for about three to four months.Â  Longer testing would be better, but it would also delay any results for people that have an urgent need for solid information on whether or not this burial vault works.

I skipped adding cosmoline or any other protectant to the items stored.Â  Since the testing term is measured in months, and not years, I wanted to make the items especially vulnerable to any moisture that might penetrate into the Survivor Ammo Can.Â  I would certainly recommend the use a good storage grease/protectant toÂ anyone storing guns for long periods of time.

If you are interested in seeing what a gun and accessories will look like after being cached in a homemade burial container, check out this article at Backwoods Home Magazine. Â The author stored a rifle, ammo, and supplies in the 90’s and dug them up about 15 years later. Â After all of that time in the woods, the gun and supplies were in perfect condition.

If you are interested in picking up one of the MTM cans, Amazon has them for less than $25 each. Â Considering the cost of materials and the amount of time it would take to construct something similar from PVC at Home Depot, I think the coast is pretty reasonable. Â Of course, in a few months we will know for sure if the cans live up to the promises.

When are you going to open the can and show us if the seal was effective? As far as we know a plastic Folgers coffee can would have been just as effective and a glued/cemented PVC pipe is still the better way to go.

As soon as I have the time to edit and post the video. It’s coming…

Looking forward to the test results.