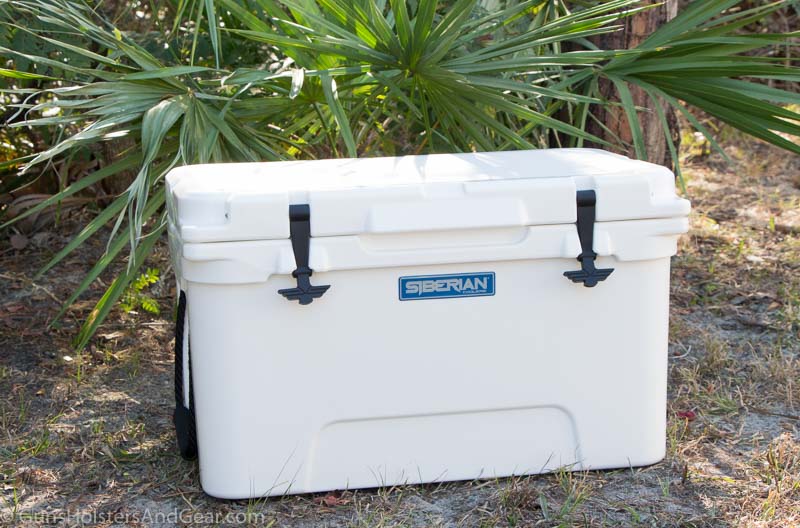 Growing up in the 70’s and 80’s, I had the chance to see a lot of ice chests in action. I grew up in Florida, which meant farming, fishing and a little bit of time spent swimming and boating. All of these activities were made much easier if you had a good cooler to keep things on ice in the abusive heat.

Cheap coolers – like the styrofoam jobs you could buy in the 7-Eleven on the way to the beach – were eschewed by my dad. He was always looking for a top notch insulated cooler that would keep a mess of fish on ice or help transport Christmas dinner leftovers home from a relative’s house.

While we tried many, none really compared to the high performance coolers being offered today. While cheap coolers are still available, a lot of companies now offer super insulated chests. Though we weren’t wealthy, I know dad would have ponied up the dough for one of these back in the day.

One top end cooler company is Siberian Coolers. Recently, the company sent me a 45 quart Classic cooler to test, and I’ve been darn impressed by it.

Ok, coolers may not be the most exciting thing I ever talk about on this site. But, they are immensely valuable. From keeping grandma’s leftovers fresh on your way back to your college dorm to keeping important medicine chilled during a disaster, a good ice chest can be worth its weight in gold. 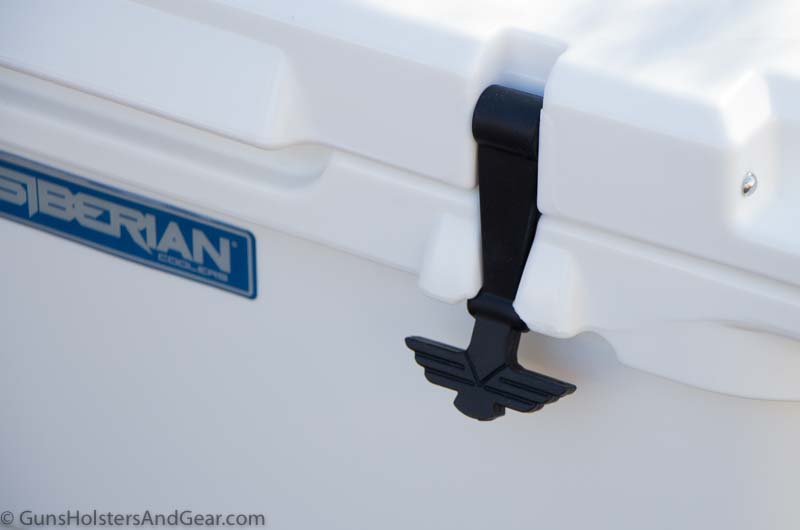 The Siberian Coolers Classic models are all made with a LLDPE (linear low-density polyethylene) shell that has PE foam injected into it to offer excellent insulating properties. A flat rubber seal is attached to the underside of the lid and two heavy duty rubber latches keep everything tight. 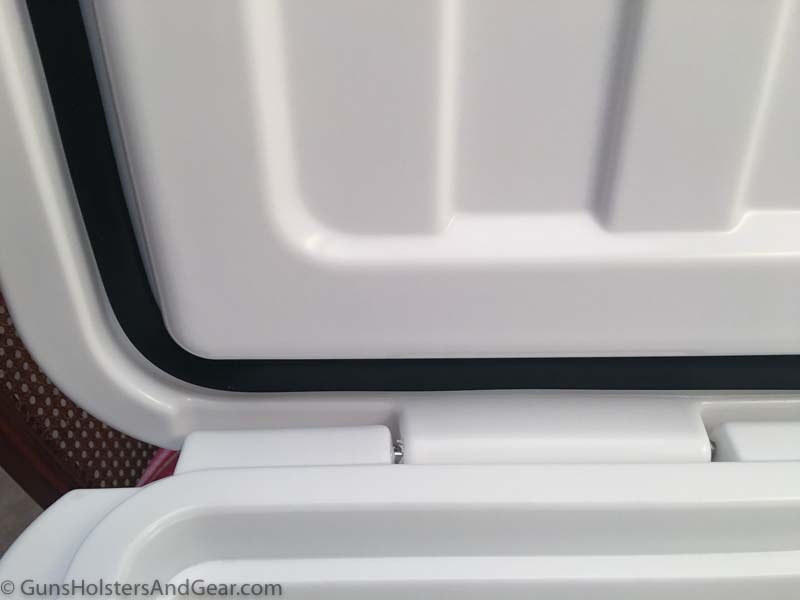 As soon as you lift this cooler, you realize the insulation is for real: the cooler weighs more than 24 pounds. There are two rope handles – one per end – that help you carry it. Each handle has a polymer sleeve covered in foam. This gives you a sturdy grabbing point that doesn’t cut or bite into the hand when carrying heavy stuff. 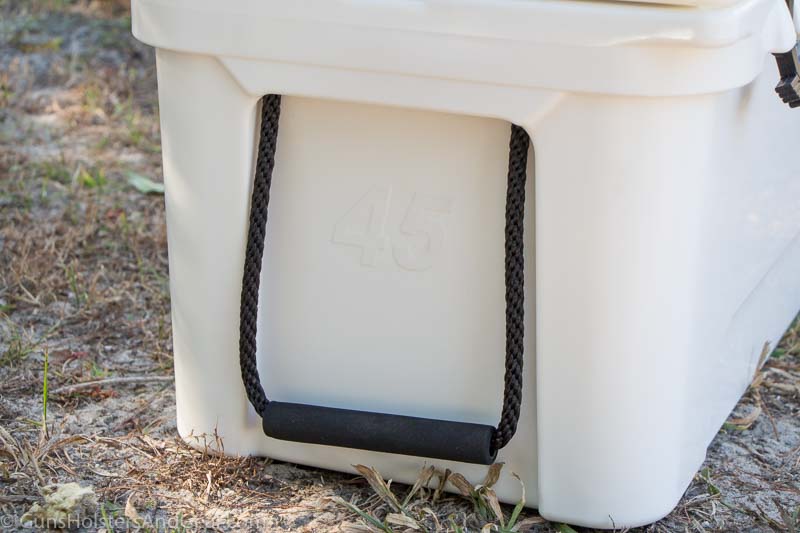 An average sized guy can carry one of these by himself. However, the rope handles make it very easy for two people to transport it as well.

There is a screw in type drain plug at one end. Nothing fancy here: take it out to drain water, leave it in to keep anything from draining out. 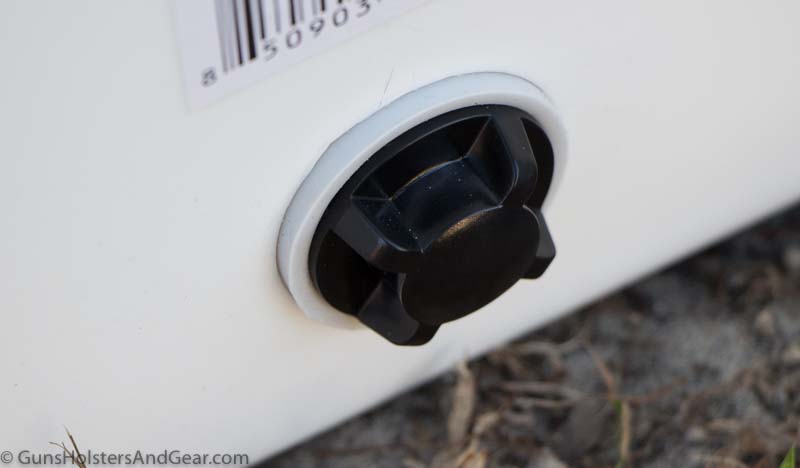 The model I was testing was the 45 quart model. Larger and smaller coolers are available, and those are obviously different in dimensions and weight.

I found the 45 quart model was perfect for the typical family needs: picnics, trips, etc. It is big enough to transport deer or hog back from the butcher, though some hunters may want to opt for the larger 65 quart model. 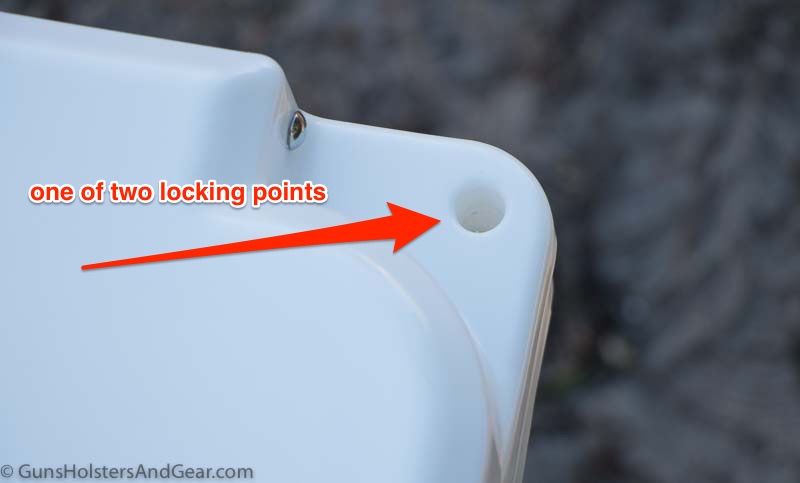 This cooler is lockable with the use of padlocks. While this is effective at keeping your fishing buddy out of your beer, it is also good for keeping a bear out of your grub as well. Just make sure you get the long hasp padlocks as the walls on this thing are thick. 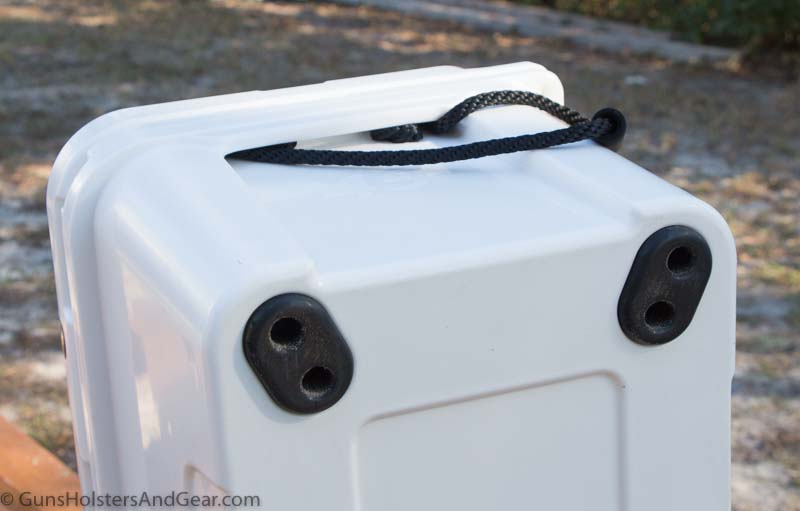 The bottom of the Classic 45 is outfitted with wide rubber feet. These do an excellent job at keeping the cooler in place. The down side is sand sticks to rubber, and we seem to have an abundance of sand here in Florida.

Outside of a lab, it is tough for me to provide absolute numbers for comparisons to other products. External temperatures, even inside my office, can fluctuate which has an impact on the performance of the cooler.

Instead of trying to simulate lab performance, I went with a non-sexy, butÂ real world application: keeping meat and other perishables cool during a long car trip.

I suppose nearly everyone has used a cooler to transport food stuffs to and from a relative’s home that is more than a few minutes from your own abode. In this case, I was taking the family to visit my father who lives more than four hours away. 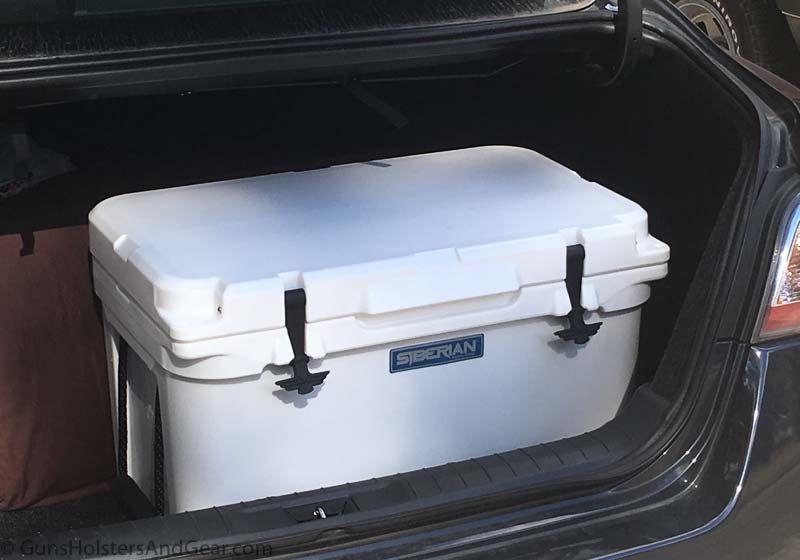 My wife loaded up the cooler with a layer of ice cubes then a whole host of cooking she had done to take to my dad. We were going to have a big dinner, and she wanted enough for him and his buddies to snack on for several days afterward.

The cooler was large enough to handle a full Thanksgiving-style dinner for five with plenty of leftovers. The big question was how well the cooler would keep everything chilled. 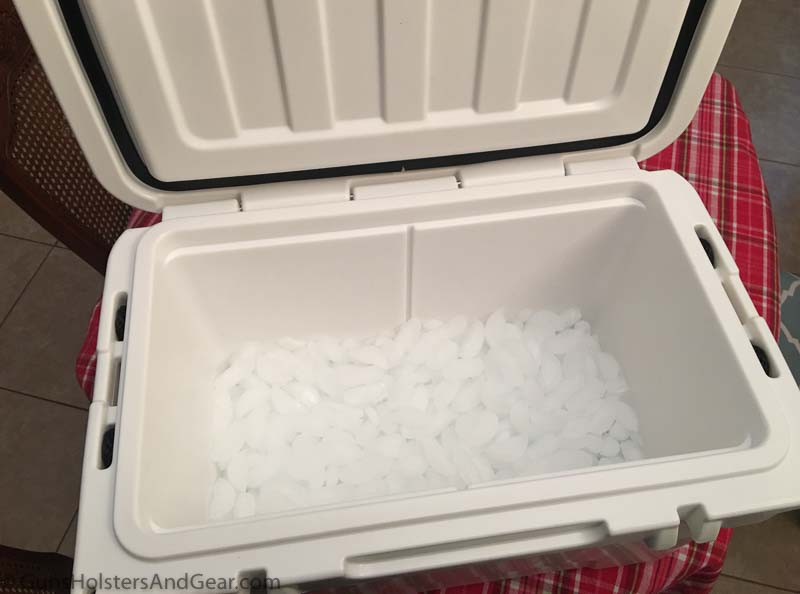 I loaded the cooler in the trunk of my wife’s car where it road for the entire trip. The ambient temperature outside was around 80Ëš F and the entire trip was made in the afternoon, meaning the sun was hitting the trunk lid full force.

After arriving at my father’s home, the ice was still solid and the food was still cold. While a four hour trip isn’t the toughest of tests, my general purpose Igloo cooler would have let about 1/4 or more of the ice melt by this point. So, the Siberian Classic was an obvious step or two better than that.

I left the cooler on my father’s porch overnight and by the next evening, the interior was still pretty cold. Roughly 30 hours after being loaded, about 1/3 to 1/2 of the ice had melted. Around 40 hours in, the ice had almost completely melted though the water was still very cold. 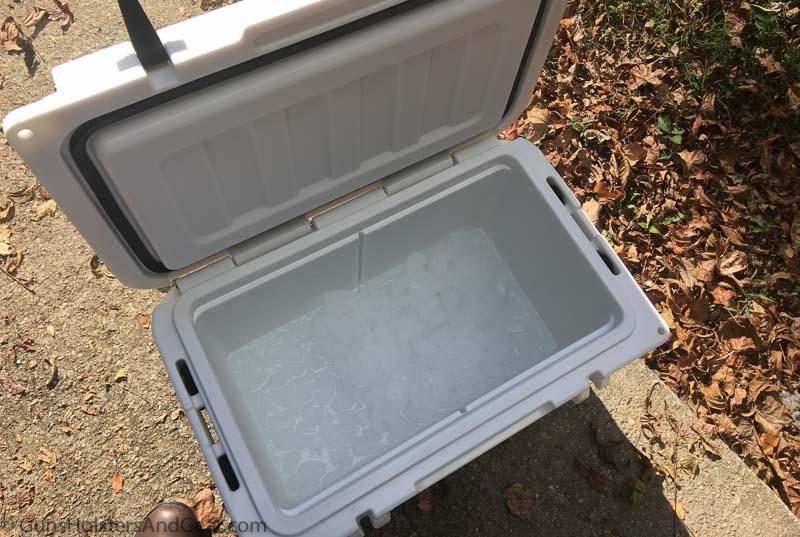 If I had loaded more ice into the cooler initially, instead of a single layer along the bottom, I expect that I would have had ice well beyond 48 hours.

I found this to be a vast improvement over standard ice chests and more than acceptable for transporting a quartered animal home after a hunt. 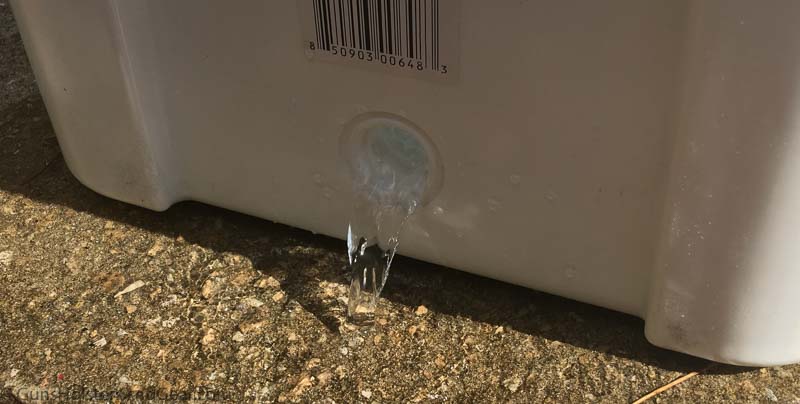 The drain plug worked as expected. It did not leak at any time and was easy to screw in and out. 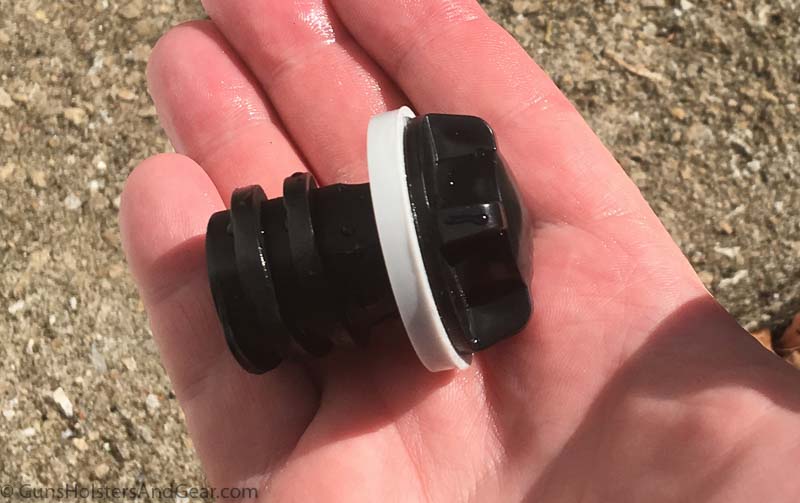 I’ve used this cooler several times for other, much shorter trips. Each time it has performed exactly as I expected it would. It is infinitely better than the standard $20 cooler.

I was impressed by the Siberian Classic. This cooler performed better than any of the other coolers I have owned – certainly far better than the typical Walmart cooler.

I suppose the Yeti coolers are the standard that many people use to judge other coolers. I do not own a Yeti, so I cannot offer a direct comparison of the two brands. However, I’ve used Yetis and been around them quite a bit in all of the things I do. The Siberian Coolers Classic appeared to perform as well, if not better, than the Yeti coolers I have seen.

If you are in the market for a top notch cooler, take a look at the products from Siberian Coolers. I like them, and I suspect you will as well.

You, my readers, are my customers. It is you for whom I write these reviews. Gear like Siberian Coolers is not cheap and before you drop any money on it, you should be able to read honest reviews to make informed decisions on how to spend your hard earned dollars.

But, there is a sad fact that most readers suspect and few people talk about:

Many of the reviews you read online are literally paid for.

Yes, there are companies across all industries that purchase so-called reviews to be placed on sites.

Well, not here. In fact, on every review I include a complete disclosure of all potential biases so that you can evaluate if my work can be trusted.

First, Siberian Coolers did not pay me any money to write this review. The company provided the cooler for me to test, and it does have a suggested retail value of $289 at the time of this writing. While that is a lot of money, there is no amount of money that is worth ruining my credibility.

Siberian Coolers did not ask or suggest that this be a “good” or “positive” review of their products. As I tell all companies, I give only honest reviews that I attempt to conduct in the most fair manner possible.

Siberian Coolers is not a sponsor or advertiser on this site. Nor are we in any talks for them to be one. In fact, I do not accept advertising money from any company.

I do not own any stock in, or have any other financial interest in, any outdoors, sporting goods or firearms companies.

Any questions – please leave a comment in the section below and I’ll be happy to further explain.

Siberian Coolers manufacture high end ice chests (aka coolers). I tested a 45 quart Classic model and found it to be extremely effective at keeping food cold. The coolers have a lifetime warranty and appear to be at least equal in quality to other high performance coolers on the market currently.