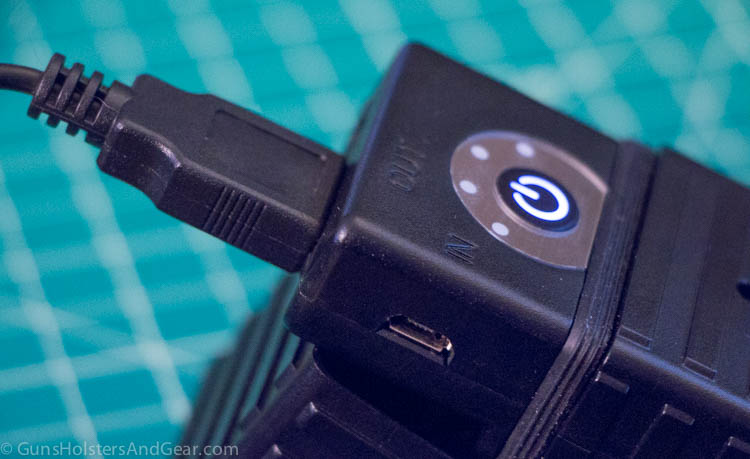 At the 2015 SHOT Show, I got a sneak peak at the new EPU-5200 battery pack from Streamlight. This new unit is a durable 5,200 mAh/19.24 Wh battery designed to charge phones and other devices while you are away from a wall socket.

Two months ago, the company sent me one to review. Like a lot of you,Â I have several other battery packs, some of which do an exceptional job. However, the Streamlight is the only one I have that I would feel comfortable carrying when kayaking, camping or just getting caught in a rainstorm. I found the unit to be very water resistant and pretty darn rugged.

If you want my Â bottom line, this Streamlight battery pack is an excellent buy for anyone who finds themselves out-of-doors. It doesn’t have the largest capacity, but it is weatherproof and drop resistant and will charge your phone multiple times in harsh environments. Please continue on in this review for all of the details.

Charging via USB ports has become the de facto standard for most modern electronics. Phones, tablets, watches and even tactical flashlights are using USB charging. Because of this, portable power banks like the Streamlight EPU-5200 have become a popular way of keeping those devices charged while on the go.

There are a large numberÂ of mobile batteryÂ packs on the market. They range in quality from the excellent to the nearly worthless, and different companies offer any number of features on these units.

Streamlight uses a lithium ion (Li-ion) battery that is rated for 500 charge cycles. In general, Li-ion batteries do not set a memory like older rechargeable batteries, and they also hold a charge for a longer period of time, typically months.

The EPU-5200 is a compact portable battery that is about 4.5″ long and weighs a little over 5 ounces. It has a hard plastic shell with large ridges similar to the slide serrations on a Glock pistol. Streamlight included a metal clip on the back of the power pack for easy carrying. The clip is removable.

One end of the EPU-5200 has a protective cap that slides off to reveal the controls and charging ports. The cap is attached to the body with a loop of high strength elastic cord. This prevents the cap from being lost. A side benefit of the captive top is that when it is moved to expose the charging ports, it can act as a kickstand for the unit.

A thick rubber gasket creates a very tight seal between the cap and body of the power bank. Streamlight does not claim that the unit is waterproof, but they clearly built it to be very water resistant.

Unlike the vast majority of battery packs, the Streamlight EPU-5200 is tested for drop resistance. According to testing done in compliance with the ANSI FL 1 standard, this unit is drop resistant to a full 2 meters.

For those who are not familiar with the standard, this rating means that an independent testing lab drop-tested six of these units. Each unit was dropped six times – one on each side – from 2 meters. To pass the test, no significant damage can be visible (cracked case, etc.) and the device must continue to work.

The EPU-5200 has a micro-USB port on the side of the body. This is used for charging the battery pack. On the end is a single, standard-sized USB port that is used to charge other devices with this unit as the power source.

Next to the USB port is an LED light that can be used as a navigational or work light. The light is not intended, nor is it suitable, to be a tactical light. It is more than adequate to help you find your way in the dark. 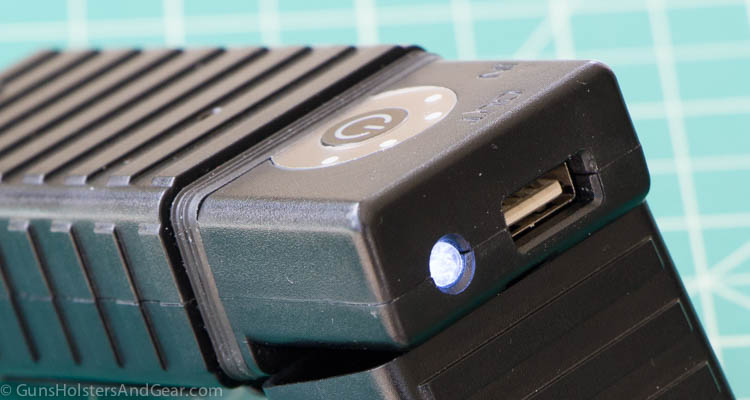 On the face of the unit is a power switch that controls the output and light. Four blue LEDs arc over the top of the power switch to indicate the amount of charge contained in the power bank.

Streamlight backs the EPU-5200 with a lifetime warranty. The warranty does not cover normal use issues, so I would not expect them to replace a unit for not holding a charge once you have goneÂ past the stated number of charge cycles.

The amount of energy stored in a battery can be expressed in a variety of ways. One way is in amp hours (Ah) and another is Wh (watt hours.) Most frequently, the measurement of mAh, or milliamp hours, is used to express capacity in consumer batteries. However, these numbers are just part ofÂ the story. 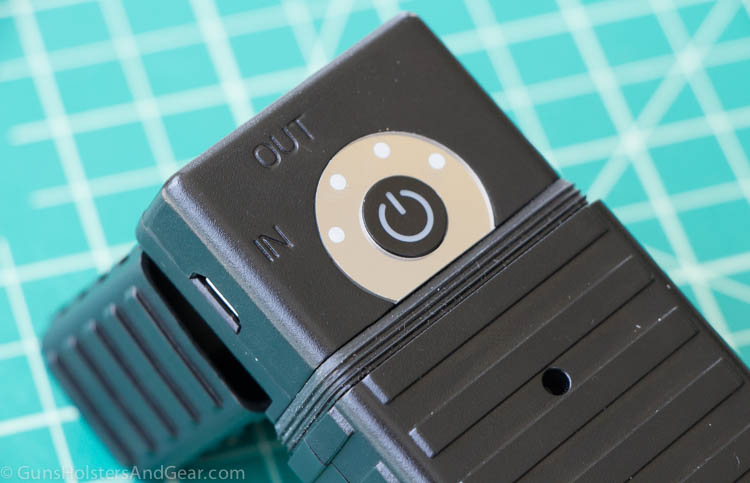 Consider the mAh rating on a battery as the theoretical maximum capacity under ideal conditions. Real world capacity is frequently lower than the rating due to the way different devices draw energy from the battery, inefficiencies in the system, etc.

The following information is provided in an attempt to provide you with an approachable, Â relatively non-technical look at the performance of this portable battery pack.

When testing the battery, I used two different electronic devices: an iPhone 5 and a Streamlight ProTac HL USB flashlight.

I started off by running my iPhone down until it shut off (below 7%) and then charging it using the original Apple cable. The EPU-5200 charged the phone to 100% three times. A fourth try got me to about 40%.

Not bad considering Streamlight estimates the pack will completely charge an iPhone 2-3 times. Obviously, newer iPhones with larger battery capacities are not likely toÂ get 3+ charges out of the unit. 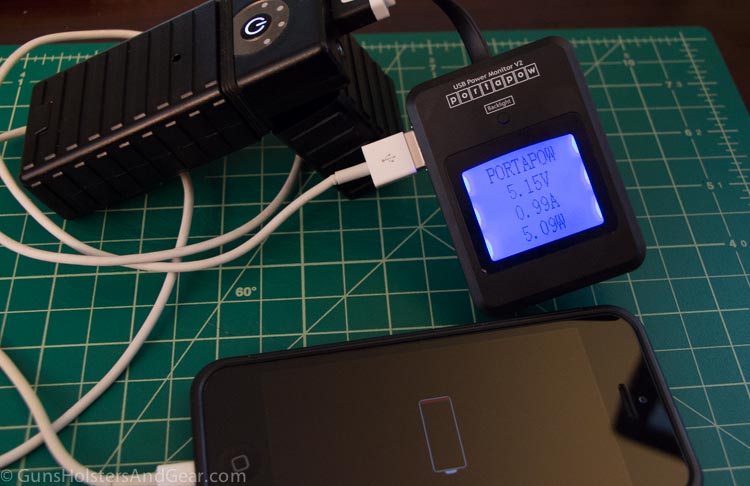 I also ran a charge test with the ProTac HL USB. Streamlight states the battery pack will completely charge the unit twice, and so it did. A third try didn’t transfer very much juice.

Charging the ProTac HL USB is significantly slower than the iPhone due to the light’s relatively low ability to draw power. If you skip down to the next section, you will see than the iPhone was drawing more than 5 watts, while the flashlight was just over 2 watts. Consequently, the charge time on the flashlight from dead to full averaged 7 hours, 6 minutes. The battery in the flashlight is a 3.6v 2.2 Ah/7.92 Wh Li-ion.

Charging the EPU-5200 is a slow process. Streamlight advises it takes up to 8 hours to charge the unit. My own experience with the unit finds this to be an accurate estimation.

The next thing I did was toÂ measure the output of the EPU-5200 and two other battery packs for comparison.Â I used an inexpensive PortaPow USB power monitor. For comparison, I used Limefuel L156x (15,600 mAh/57.72 Wh) and Duracell PPS2 (1150 mAh) battery packs.

The power monitor connected directly to the battery and the charging cable then connected to the monitor. I conducted the tests with the Streamlight unit at about 75% charge.

When conducting the tests, I used the shortest cable I had on hand when charging. However to see what, if any, difference cable length might make, I took measurements with both a 4″ cable and a 40″ cable charging the ProTac HL USB from the EPU-5200.

The measured differences were small, but consistent. The short cable measured 2.09 watts: 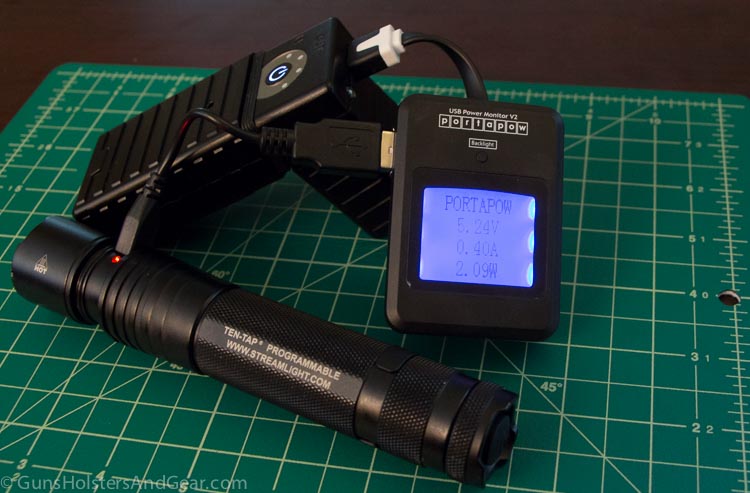 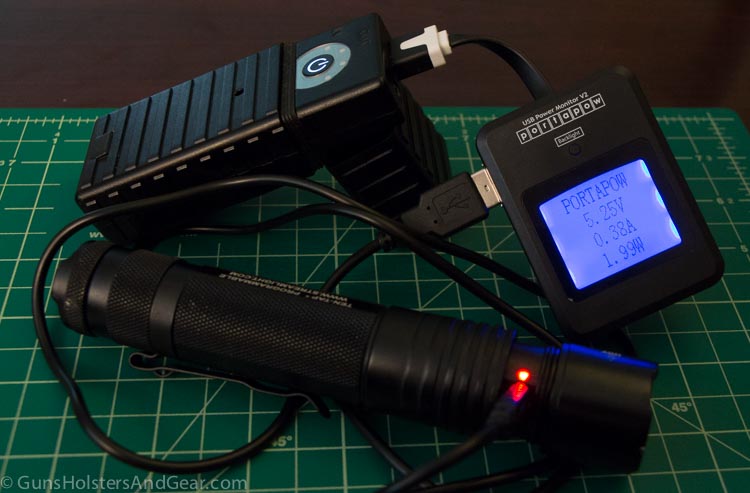 While the longer cable does not reduce efficiency by very much, it does suggest that multiple inefficiencies throughout the system can reduce the useable charge in whatever external battery pack you may be using.

This unit is not waterproof. Dunk it in the river and you might kill it. However, the EPU-5200 is rated at the IPX4 standard, which means the unit is water resistant. To meet the IPX4 standard, the unit must be able to withstand splashing from every direction. This makes the unit weather proof, and highly resistant to water intrusion.

As I mentioned earlier in this review, the protective cover has a thick rubber gasket with three ridges similar to windshield wiper blades. This seems to do an excellent job at keeping water out of the electronics.

Two weeks ago, I took the family to Disney World. In the past, I would carry my Limefuel with me. However, Florida tends to be quite rainy in the summer afternoons. The forecast suggested we would spend at least part of the day getting rained on. So, I was happy to take the lighter (by half) and infinitely more water resistant EPU-5200 with me for the trip. 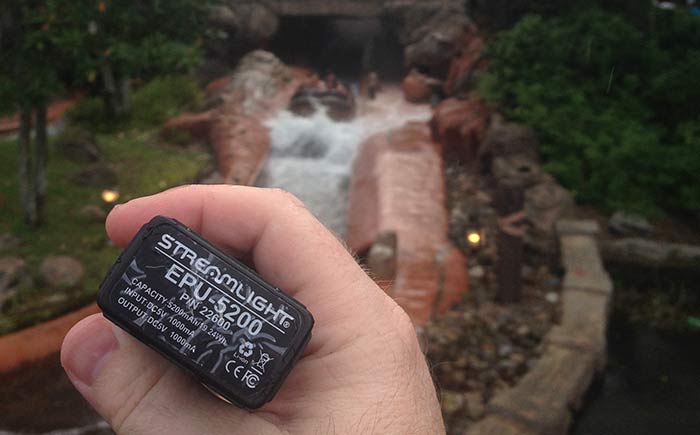 As expected, the rain started around 4 pm. It was not a downpour, but it was definitely a steady, soaking rain. I pulled the Streamlight out of my Maxpedition pack to ensure it would be exposed to the weather. The picture above was taken in front of Splash Mountain at about 5 pm. It’s not a great shot, but the unit was wet.

The unit showed no ill effects from the rain, and no water appeared to have leaked into any part of the pack. Now, several weeks later, the EPU-5200 continues to operate perfectly.

I like the Streamlight EPU-5200 quite a lot. It offers a significantÂ amount of portable charging capabilities while remaining fairly light. Additionally, the unit is more rugged and better protected from the weather than many otherÂ external battery packs.

While I like the idea of having a larger capacity rating, I found that in actual use this battery pack provided more than enough juice to keep me – a heavy electronics user – running throughout the day.

The EPU-5200 is a great balance between durability and capacity. Whereas I might opt for a heavier battery bank while hitting the SHOT Show where I runÂ multiple electronicsÂ devices hard all day, the Streamlight is the item I would take for anything I do outdoors. It is lighter, weatherproof andÂ impact resistant. Additionally, it offers ample recharging capabilities in the vast majority of circumstances. For me, the EPU-5200 is an excellent choice for its intended purpose.

It would be nice if the unit had a second USB port so I could charge two devices at the same time. However, this is definitely not a deal killer for me, and I happily recommend this unit. If you would like to purchase one of these units, please click here.

With all reviews, you should know what biases exist in the reviewer. Therefore, I want you to know about any potential influences in my review so you can make an informed decision when deciding what to buy.

Streamlight provided this test unit to me free of charge for the specific intention of having it reviewed. No promises were made or solicited for a positive review. Streamlight is not an advertiser or sponsor, nor are we in any talks for them to be one.