In August 2011, unofficial word leaked out that Beretta was jumping into the subcompact gun market with the Nano pistol. In September of the same year, Beretta officially announced the new handgun. Â Since that time, there have been more than one Beretta Nano review, updates to the product line and even some torture testing. Â In this article, we will provide you with all of the latest information on the little handgun. 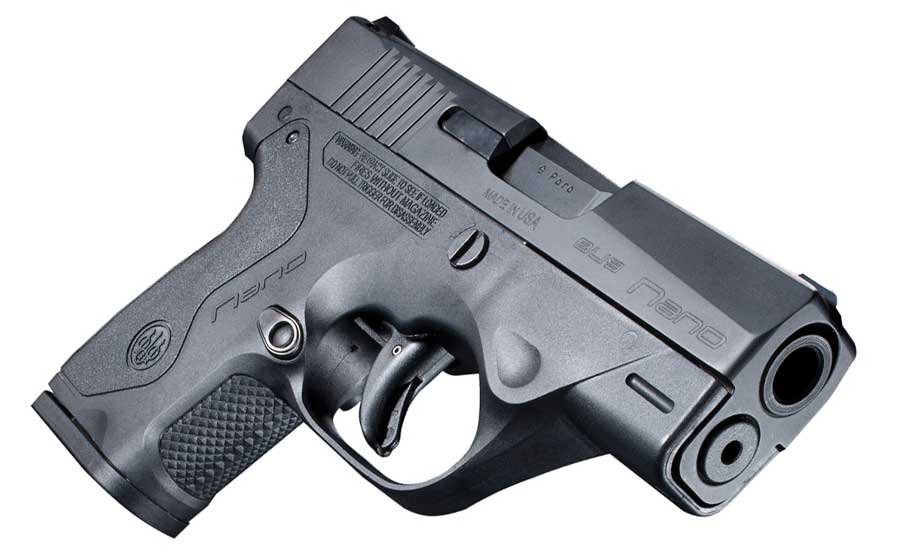 The Beretta Nano is a striker-fired, 9mm pistol with a polymer frame. Â The magazine holds six for a total of seven rounds. Â The guns are completely made in the United States.

As of the time of this writing, the Nano is not available in any caliber other than 9mm. Â However, that may change in the future. Â While the company will not discuss future plans with regards to caliber, I can’t help but thinking a .40 caliber Nano would be a good selling handgun for the company.

The Nano uses a modular chasis, similar to that of the SIG SAUER P250. Â The chasis is the “firearm” part of the gun, meaning that you could buy multiple sizes of grip frames without going through an FFL. Â Depending on which frame you wanted to use, you would merely drop the chasis into the frame and head off to the range.

It is unknown if Beretta willÂ eventuallyÂ make different sized frames to match the varied hand sizes of shooters. Â However, Beretta has introduced a variety of frame colors that would allow you to change the gun to reflect your mood, attire or other whim. Â More on that later in the article. Â For now, being able to remove the internal chasis is simply a way to make detail cleaning easier.

This Beretta has several nice features not typically found on subcompact guns. Â For example, the magazine release button is reversible. Â This allows the owner to move the release to the right-hand side of the frame for easier shooting if he or she is a south paw. Â The release is not ambidextrous, meaning that it can only be used on one side of the gun at a time.

In many subcompact pistols, the sights areÂ minusculeÂ and hard to use. Â Adjusting them is difficult at best with some companies’ guns. Â The Nano, however, has low profile, but very useable sights in a three-dot configuration. Â Additionally, the sights are easily adjustable using a hex wrench only – no gunsmith or cumbersome sight pushing tools needed. Â This adjustment method is a jump ahead of many full sized pistols.

END_OF_DOCUMENT_TOKEN_TO_BE_REPLACED

One of the Internet arguments that never seems to die is whether you should carry a pistol with a cartridge in the chamber.Â  The argument against carrying with “one in the pipe” is based on the idea that it is unsafe to do so.Â  People are concerned about “accidental” discharges while it is carried, or if the pistol is dropped.

I’ll be completely up front and tell you that with a quality firearm, quality holster and competent owner, the handgun should be carried with a cartridge in the chamber if you are carrying for self defense.Â  In most instances, a self-defense situation involving the use of deadly force develops far to quickly for you to draw your weapon and then work the slide before being able to employ the handgun.

But is it safe to carry a cartridge in the chamber?

In my mind, there are three components to safely carrying a handgun: the firearm, the owner, and the holster.Â  When all three parts are of sufficient quality, and in place, a handgun can be carried safely with a cartridge in the chamber.

A quality firearm will not discharge when dropped.Â  Modern handguns of quality construction are designed to be carried with a cartridge in the chamber.Â  These firearms incorporate some type of “drop safety” into the contruction of the firearm.Â  Some guns use a physical block that moves out of the way when the trigger is pressed.Â  Others use light firing pins with heavy springs to prevent the pin from ever generating enough energy in a fall to sufficiently strike the primer.