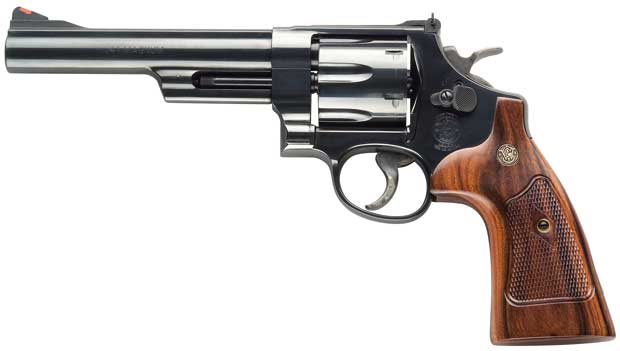 The Smith & Wesson Model 57 Classic is a modern version of the original 57 that was introduced in 1964. Â The Classic Model 57 was introduced by S&W at the 2009 SHOT Show. Â Since that 2009 re-introduction, the available variations have narrowed on this classic wheelgun to one.

Introduction of Â a Classic

In addition to the beautiful metal colors, the revolvers featured the classic Smith & Wesson styling of the checkered square-butt walnut grips.

Sights were handled in the classic style as well: a pinned red ramp front sight and a micro-adjustable, white outline rear sight.

When I saw them at the SHOT Show, I said this:

I really love the styling of the classic S&W revolvers and these look great.Â  The only thing I absolutely dislike about them: the internal safety lock. Â  If Smith and Wesson would make these WITHOUT the lock, I would order a 4″ blue model 57 as soon as my dealer opened shop tomorrow!

Many S&W fans had similar sentiments about the internal locks on the Model 57 Classic and other revolvers that the company was making.

At the time of introduction, the MSRP ranged from $1067 to 1130 depending on finish and barrel length. At the time of this update, there is only one variation of the Model 57 Classic left in the company’s catalog. Â It has a 6″ barrel and a bright blue finish. Â The nickel finished revolvers are no longer available, nor is the 4″ blued. Â MSRP is $979, which is actually less than when the guns were introduced in 2009.