One of the things Hornady is known for is the manufacture of its Dangerous Game Series ammunition: serious cartridges for hunting the largest game on Earth.Â  These cartridges are loaded for the traditional big guns used to hunt elephant, hippopotamus and other large African game.

All of the new offerings are loaded with both the DGS and DGX bullets.

The Hornady DGS bullet is a copper-clad, steel jacketed bullet that does not expand, and will deliver deep penetration.Â  The Hornady DGX bullet also has a copper-clad steel jacket, but has a flat meplat (tip of the bullet) to allow controled expansion, yet still retain straight and deep penetration.Â  Both bullets utilize a high antimony lead core. 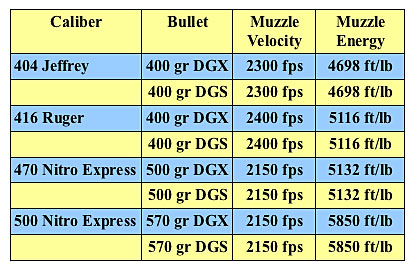 Here is a video from Hornady showing the new calibers and explaining how they work. Â The video clearly details the different bullets used and even includes some awesome footage of hunting in Africa. Â The video does a very good job in describing the new dangerous game loads from Hornady Manufacturing.

Hornady expanded this line of Dangerous Game ammunition even more, which gives hunters a broader range of calibers and loads to choose from. Â If you are shooting any of the traditional dangerous game calibers, you definitely want to check out the offerings from Hornady.

Hornady is also selling the components and dies for these dangerous game calibers. Â That allows a shooter to work up his or her own load if they so desire.

The factory loads match the original loadings in these calibers. Â So, for all of those classic double gun shooters, this means that your barrels regulation will hold when shooting these rounds. Â There won’t be any need for guesswork as to where the rounds will hit.