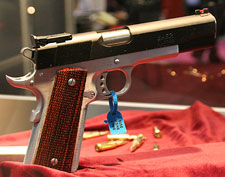 The Boss is based on Baer’s Premier II pistol, with added features “…to really make it the Boss of custom .45s.”Â  The Boss is guaranteed to shoot three inch groups at 50 yards.Â  MSRP is $2109.

For those of you that do not know, Ford made the Boss 429 Mustang in 1969 and 1970 only.Â  The massive 429 cubic inch engine had to be squeezed into the Mustang’s engine compartment by Kar Kraft, an outside assembly facility contracted by Ford.Â  The Boss 429 was one of the most powerful production, drag-ready cars made at the height of the muscle car era.

In addition to the Boss 1911, Les Baer is also selling a 1/25th scale reproduction of Baer’s own 1970 Boss 429.Â  The scale model is exceptionally accurate from the Grabber Green paint to the functional hood scoop to the detailed undercarriage.Â  If you are thinking about buying the Boss 1911, consider buying the replica that inspired the gun. 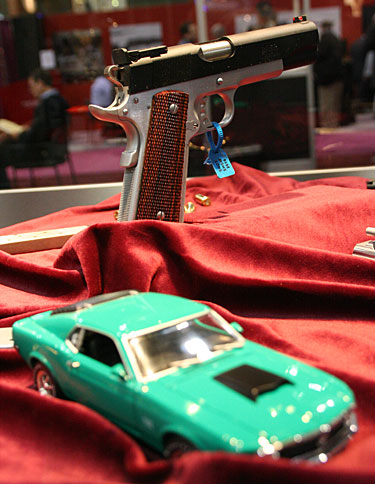 Please let me know if anyone picks up one of these guns for his or her own collection. Â I’d love to know if you shoot it, and if so, how do you like it? Â If I bought one, it would most likely be a safe queen. Â I’m not much of a safe queen collector, but for something that is a limited edition or special gun like the Les Baer Boss .45 1911, I can definitely understand how most people would put this on a shelf and leave it there.