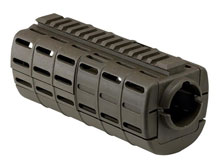 The covers are made of Santoprene, described as a high strength flexible rubber material, and are designed to be modular to fit the shooter’s desires. The covers can be removed in a matter of seconds, and do not require any tools to do so.

The handguard is designed with numerous ventilation ports to keep the barrel of the rifle from overheating. Having examined and handled the Intrafuse AR Handguard I can say that it is well made and appears to be sturdy enough to endure the rigors of repeated shooting, whether for sport or in tactical situations.

At a mere 0.55 pounds, this handguard and quad-rail system is light weight, which is a great benefit to those AR shooters that add foregrips, lights, lasers, and other heavy accessories to the front end of their rifles. The Intrafuse Handguard meets standard specifications to fit AR-15 and M-4 configurations, but TAPCO specifically advises that the Intrafuse AR Handguard was not designed for piston-style uppers.

At an MSRP of only $44.99 the TAPCO AR Handguard, complete with quad rail system and rail covers, is a real bargain to AR shooters looking to accessorize, especially when you consider that many aluminum quad rails (without covers) will run a buyer more than $100.00.

TAPCO products are made in the U.S.A. 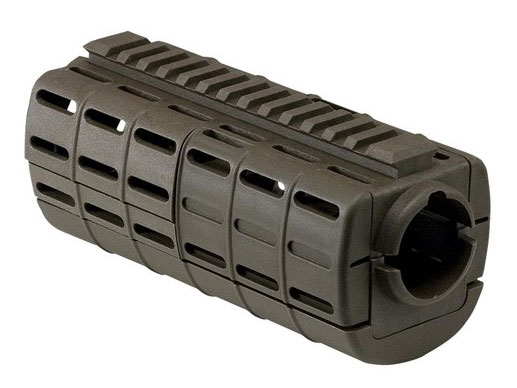