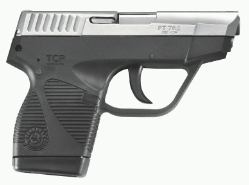 Just a couple of years ago, the .380 ACP was a secondary cartridge: largely ignored by professional gun toters, eschewed in the press by gun experts, and not a big seller for dealers. Â Now, it is the exact opposite thanks, in large part, to the Ruger LCP. Â Since then, nearly every manufacturer introduced a .380 pistol trying to cash in on this invigorated market.

The question asked at many gun manufacturers’ marketing and design meetings hasÂ undoubtedlyÂ been “What’s the next big trend?”

On the surface, the state of the .32 ACP is similar to that of the .380 ACP from three years ago. Â Guns and ammo can be found in the caliber, but nothing really new, and nothing really hot. Â The “old” .380 and the current .32 are considered to be underpowered for “serious” self-defense, and no one will readily admit they have one forÂ protection. Â But, one good gun could change that.

Develop a sexy gun in .32 ACP, and you might start reading articles about how the .32 makes perfect sense. Â Articles that talk about the caliber/gun being a perfect combination of power and compact size with the benefits of being soft shooting for the recoil sensitive among us. Â Sound familiar?

This week, MasterPiece Arms announced a .32 ACP pistol called the MPA32. Â At the 2010 SHOT Show in Las Vegas, Taurus showed us the PT732, a .32 ACP version of the TCP. Â Are these the first attempts to get in front of a new trend? Â Maybe.

Here’s the problem as I see it. Â The .32 ACP pistols don’t offer (at least yet) any real advantage over their .380 ACP counterparts. Â For the most part they run the same size with the same or similar weights, with the same magazine capacity. Â And, where .380 ACP ammo was considered to be “almost there” for self-defense, no one really tries to claim the .32 is nearly that effective. Â So, right now, I just don’t see it.

Want to make a .32 ACP trend work? Â I think you’ve got to get the gun smaller than a LCP without it getting lost in your hand, plus offer more capacity. Â Without the capacity advantage, the 9mm vs. .45 debate would have been a short argument at best.

I can see Sig and Colt making the P238/Mustang in .32 and touting increased capacity and lighter recoil for that portion of the population who need it, Taurus and Beretta revising up the tip-up “Tomcat” marketing, and KelTec, Ruger and the rest of the plastic lookalikes who don’t already have a .32 version coming up with one, but that will just be reversing the trend that led to the .380 sub-compacts in the first place, the fact you can stuff a .380 almost anywhere a .32 can go.

If there’s to be a “revolution” I think it’d go the other way, using better machining and metallurgy to put .32’s into traditional .25 ACP real “hideout”-sized guns.

Like the Colt 1908, Baby Browning and the like, guns that make the LCR and P3AT look big. A .32 you can fit in the watch pocket of your jeans or hang off the back side of a tie-clip (or in kydex on your keychain and still put the whole shebang in your pants pocket).