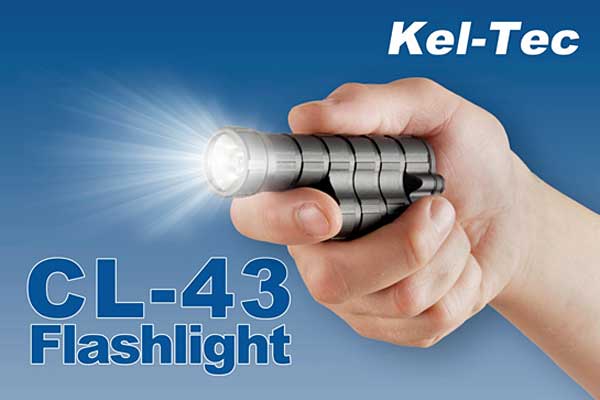 Kel-Tec is jumping into the flashlight game with the introduction of the unique CL-43.

The CL-43 definitely stands out from the crowd, by the use of a switching system that is backward when compared to many traditional lights.  The activation switch faces toward the target, and to activate the light, the user presses toward the back of the light.

The idea is the light can be extended out in an instinctive way and activated in a manner similar to simply closing one’s fist.  I don’t know if this design offers a superior way of using a while light in a stress environment, but the idea is intriguing. 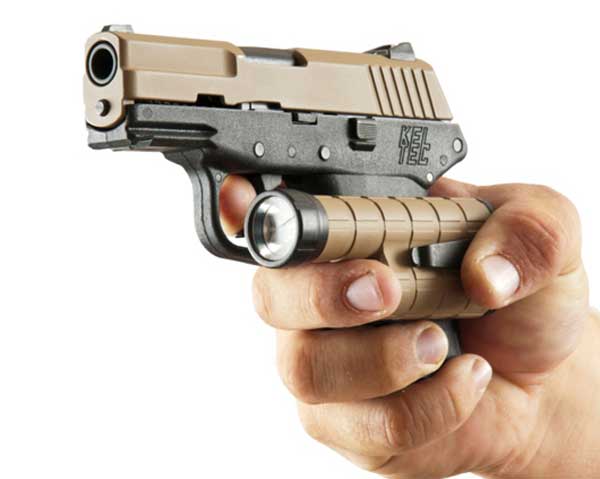 Kel-Tec claims the design of the flashlight “makes it possible to hold and operate parallel with a handgun without impairing a conventional two handed hold.”  Additionally, the company states “If required, and with some training, the light can be operated one-handed together with the gun.”

The switch has both a constant and momentary on mode.

The CL-43 throws a lot of light: 420 lumens.  However, it only produces 6400 candela.  If you are not familiar with the terms, lumens is a unit of measurement for the total light output, while candela is a measurement of the peak beam intensity.  So, the measurements on the Kel-Tec flashlight suggests to me that it is very bright close up, but does not have a lot of “reach” to paint a target at significant distances. 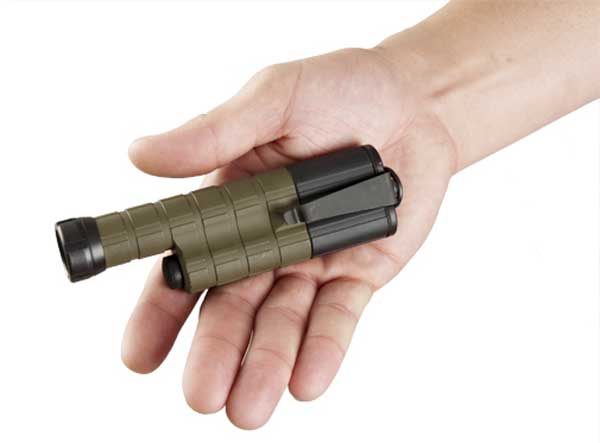 By way of comparison, I use a Streamlight ProTac HL in police work.  It produces 600 lumens and 16,000 candela.  For searching a room or a suburban backyard, it is an incredibly bright tool.  But beyond a typical backyard, the beam falls off very quickly.

On the other hand, my Streamlight SL-20L puts out 350 lumens and 60,000 candela.  For close in work, it is plenty bright, but noticibly less so than the ProTac HL.  But, I can light up a person across a golf course with the SL-20L, which is well beyond the capabilities of the ProTac.

Based on these experiences, I would suggest that the Kel-Tec CL-43 is perfectly suited (from the standpoint of light output) for “typical” self defense distances, but poorly suited for anyone needing something with any kind of reach.

The flashlight is powered by three CR123 batteries.   The batteries are rated to run this light for more than 3.5 hours.  By comparison, the ProTac HL mentioned above uses two CR123 batteries, is brighter, but only is rated for 1.25 hours.  Based on my experience, I can run for a month on one set of batteries in the ProTac – and that is with regular use as a cop.  For a citizen who is carrying the light, but using it only infrequently, I would expect you could go months without a drop in power.

The flashlight is waterproof to 1 meter for a 30 minute submersion.

I definitely applaud Kel-Tec for voluntarily adhering to the FL-1 standard for flashlights.  This is an industry standardized way of measuring and comparing flashlights for things such as brightness, runtime, water resistance and drop testing.

Many companies, such as Streamlight, MagLite, Energizer, Pelican and Coast, voluntarily submit their lights for testing.  These results are then displayed on the company’s packaging and literature, which allows a buyer to better comparison shop for flashlights.  Strangely, I’ve never been able to find any FL-1 standard information on SureFire lights.  I don’t believe they participate in this open standard.

The Kel-Tec CL-43 is made of aluminum and is either hard-coat anodized or Cerakoted in one of five colors: 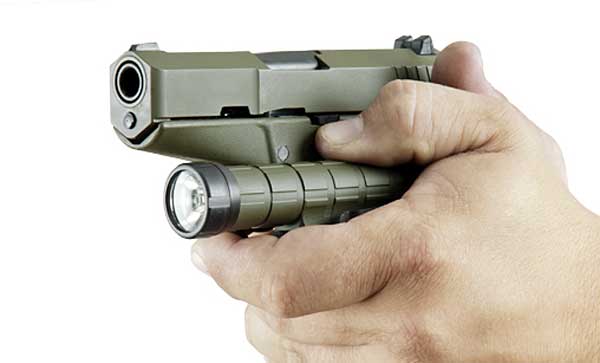 Kinda theoretical objection, but I’m not sure I want my light to be “trigger finger” operated, even in the off hand. Not sure if it offers enough real benefit to overcome the theoretical risk.

It seems like there might be a possibility of a sympathetic pull if startled. Training issue I know, but “light with thumb (or heel of hand, other finger, etc)” and “gun with index finger” seems a safer separation.

The light may be a “handy-dandy” for use with a pistol but I can’t figure out how one would mount it to a shotgun or other long gun yet still be able to get a finger to the on/off switch. It appears to me that even using Kel-Tec’s mount (a $22 accessory) the mount would have to be placed on the extended single tube of the light, leaving little room to get your finger to the switch. Can anybody set me straight on this?