With enough blinding power to peel the rotting flesh from the walking dead, the new UDR Dominator from SureFire throws 2,400 lumens of light. But, at what price does this power come?

According to the manufacturer, this handheld flashlight is the first LED-based torch to produce this much output before. But raw light output alone does not a good flashlight make. Let’s take a look at what this flashlight can do, what it will not do and what it might be well-suited for.

One of the main selling points with this new flashlight is the amount of light it is throwing. Frankly, 2,400 lumens is a lot of light. However, it is not the only measurement of output.

One of the measurements that SureFire typically does not include for its lighting products is candela. Candela is a measurement of the peak beam intensity. Where lumens measures total light output (in all directions), candela measures the focused point of the flashlight beam.

Candela can give a user an idea of how powerful the center beam is, and therefore, if the beam is more of a spot or flood light. Unfortunately, without that measurement, it can be hard to make an educated decision about it.

SureFire does state that the Dominator has a “deep precision reflector to shape the light into a far-reaching beam.” This suggests the light is more spot than flood. However, “far-reaching” is a relative description and may not give you the information you need.

If this light does have a long reach, it may make a very good light for anyone needing to illuminate objects at distance. In this context, it may make a lot of sense for anyone involved in search & rescue, military operations and border security. I could also see where it might be useful to a rancher working in open land.

This light has multiple output levels. According to SureFire, the light has nine different output levels plus a strobe function. At the high end, the output is the aforementioned 2,400 lumens. At the lowest output level, the UDR Dominator puts out a mere 14 lumens.

Light levels are controlled by a combination of a rotating ring and three different push-type buttons on the flashlight head. Momentary-on and constant-on output is controlled via the three switches. Although it sounds complex, I imagine it is easy to run once you’ve got it in your hands.

To create this much light, you need a lot of juice.

SureFire includes a rechargeable lithium-ion battery and AC/DC charger with the light. This battery can run the light for up to 52 minutes at the highest output setting. 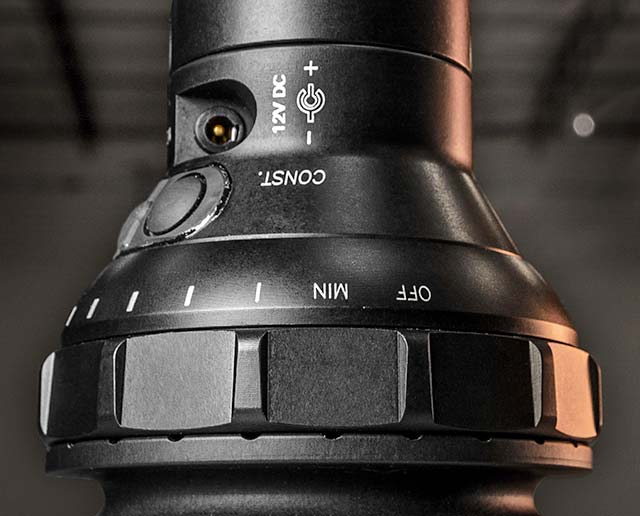 A lithium-ion, or Li-ion, battery is an excellent choice for this light. Li-ion batteries do not take a “memory” as some older rechargeables did. This means you can pop it in and out of the charger without worrying about decreasing the useful life of the light.

The UDR Dominator is also a “dual-fuel” light, meaning it can also use a second power source. In this case, CR-123A batteries can be loaded into a magazine and inserted in the place of the Li-ion battery.

If you choose to use CR-123A batteries, make sure you have plenty on hand. It will take 12 of them to run this light. The good news is that they will run the light for longer than the Li-ion battery: up to 2.5 hours on high. However, these batteries are not cheap and this might be reserved as a back-up power source.

These lights are small enough to be handheld and operated with only one hand. They are not the cumbersome rigs of old. However, they are not EDC lights either.

At just under a foot in length (11.6″,) these lights could be carried on a police officer’s duty belt. They are not going to slip into a cargo pocket. The flashlight head has a diameter of a little over 3″. 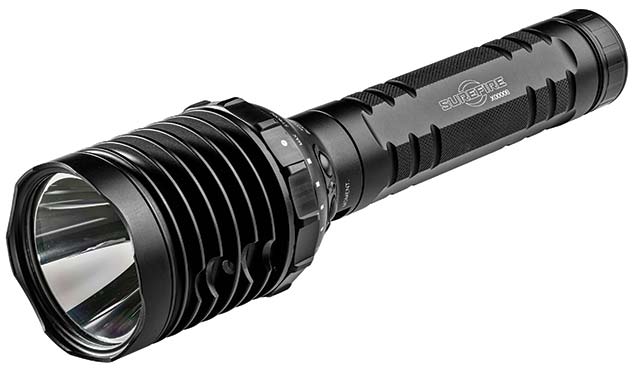 The weight of these lights is something to be considered. With the Li-ion battery, the flashlight weighs 2.4 pounds. If you are planning to carry one of these around for any length of time, that weight might be an important factor. For the rancher who keeps it in the truck, the weight is not a big deal. For the border patrol officer on a two-hour patrol on foot, it might make a difference.

As you might expect, obtaining the world’s most powerful LED flashlight is not going to be easy on the wallet. In fact, it might just be painful to many people. The MSRP on the UDR Dominator is $1,370.

If you need a very high-power flashlight, but don’t want to spend nearly $1,400, take a look at my review of the Streamlight ProTac HL 3. That light throws 1,100 lumens, but can be had for about $85 on Amazon.

This is not the brightest LED flashlight. It’s not even the brightest single-LED flashlight. Of course, claimed output numbers aren’t always reality-based, but lights powered by the Luminus SST-90, Cree MT-G2, Cree XHP-50 or Cree XHP-70 easily exceed 2400 lumens. The Eagletac MX25 series, for example offers several models that exceed this output level for a much lower price. Multiple-emitter lights often exceed it by a large margin.