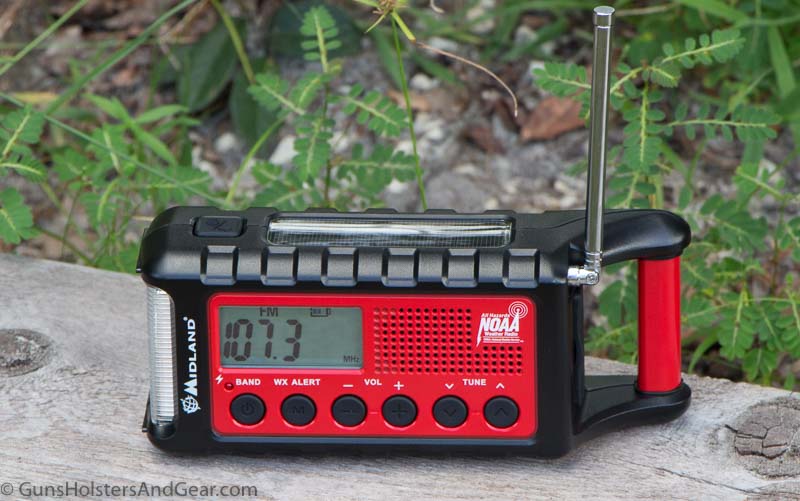 A self-powered, portable weather alert radio can be a very important part of your overall survival plan. Having one that also combines other features like a flashlight and the ability to provide USB charging makes it even more useful in your prepping.

The Midland ER310 purports to beÂ a portable weather alert radio with a lot of additional functionality that makes it a good choice in many emergency situations. Does it deliver? Based on the testing I did for this review: yes, it does.

Midland’s ER310 is a lightweight weather radio with a respectable range of features that make it useful in circumstances beyond alerting you to a bad storm.

At its core, the ER310 is a radio that offers AM, FM and weather channels with an emergency weather alert function. The radio is powered by a variety of sources including solar and crank power, and it can be used to charge external devices. The radio also has a built in flashlight and dog whistle. 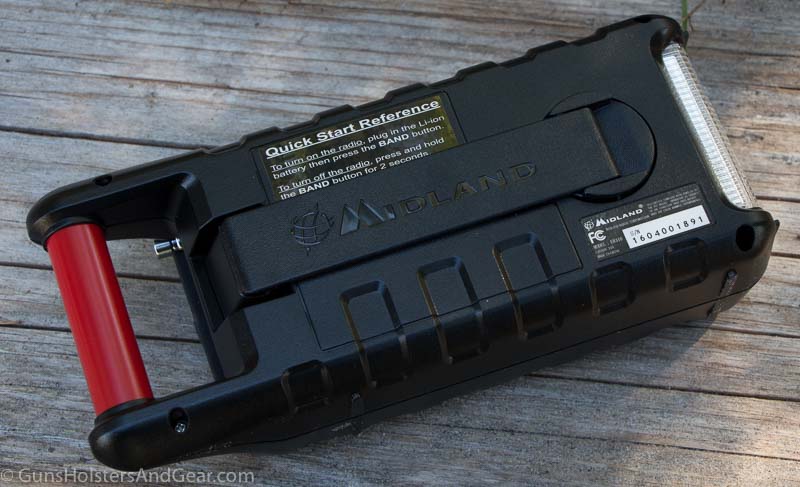 The suggested retail price of this radio is $69.99, and you can click here to buy it on Amazon for less. Let’s take a look at some of the features of this radio.

The fundamental purpose of this device is to receive weather alerts and information through the NOAA Weather Radio All Hazards network (NWR). The NWR is a web of continuously broadcasting radio stations organized around the United States and its territories.

The ER310 has a three band radio: FM, AM and the NWR (which is an FM band that is not part of the normal FM receiver band.) You can listen to the closest weather channel by tuning it just as you would any other radio channel.

A weather alert function allows you to turn the emergency activations on and off. When turned on, the radio will activate whenever an emergency broadcast is detected. In modern times, these activations can be for other hazards, such as an Amber Alert or man-made disaster, in addition to weather. 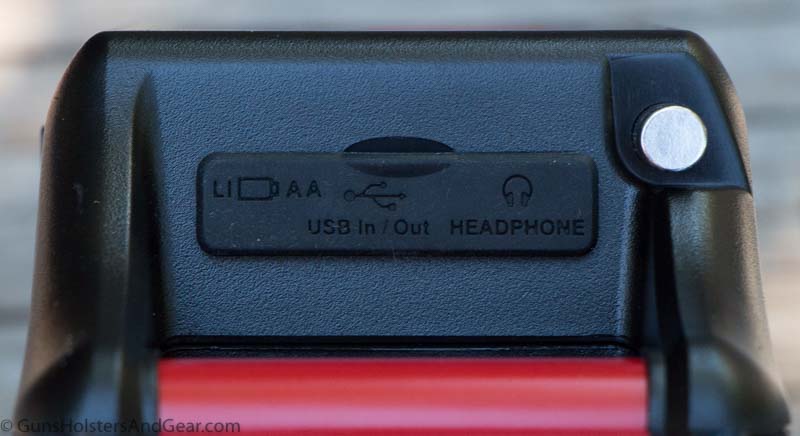 Midland builds in a simple telescoping antenna that collapses entirely into the body of the radio when not in use. For comparison purposes, I matched the ER310 against my Sangean CL-100 table top weather radio.

For radio reception, the Midland was slightlyÂ better at pulling in the local weather station than the Sangean using the built in antennas. Both were usable indoors, though placement was key as I live a fairly good distance from the closest station.

In an emergency,Â the electrical grid may be one of the first things you lose. A tornado, storm, hurricane, terrorist attack and numerous other things may take a power plant or regional substation offline. In these cases, you need to provide your own power to operate electronics and communication gear.

Planning ahead, Midland designed this weather alert radio with four different ways itÂ can be powered:

Included with the ER310 is a rechargeable 18650 lithium ion battery that is rated for 2,600 mAh. A fully charged 18650 battery should power the radio for a long period of time. 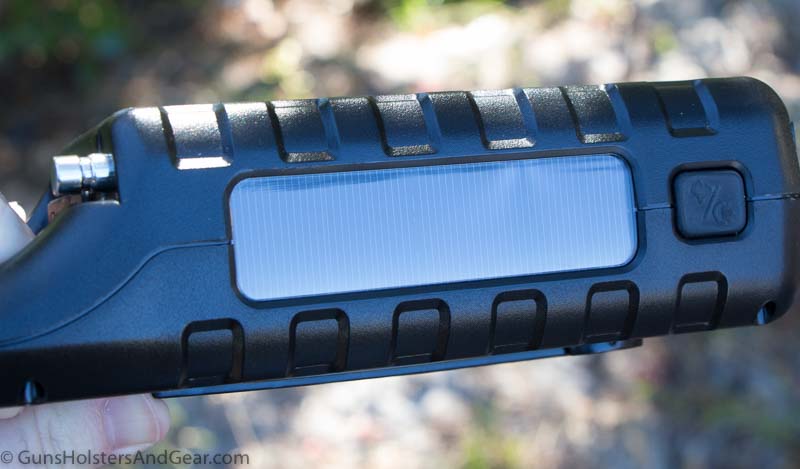 On the top of the radio is a solar cell that can charge the Li-ion battery. Based on my testing, the solar cell will not run the radio without the Li-ion battery installed. This is a potential problem in a long-term power loss situation (I would guess weeks or months of regular use,) but should not impact the vast majority of people in most emergency situations.

A second way of powering the ER310 is through a crank generator located on the back of the radio. The crank folds flat and stays out of the way when not being used.

The crank is easy to turn and is an easy way to quickly get enough juice to operate the radio when the sun is not available. According to Midland, one minute of cranking will give you about nine minutes of radio power. 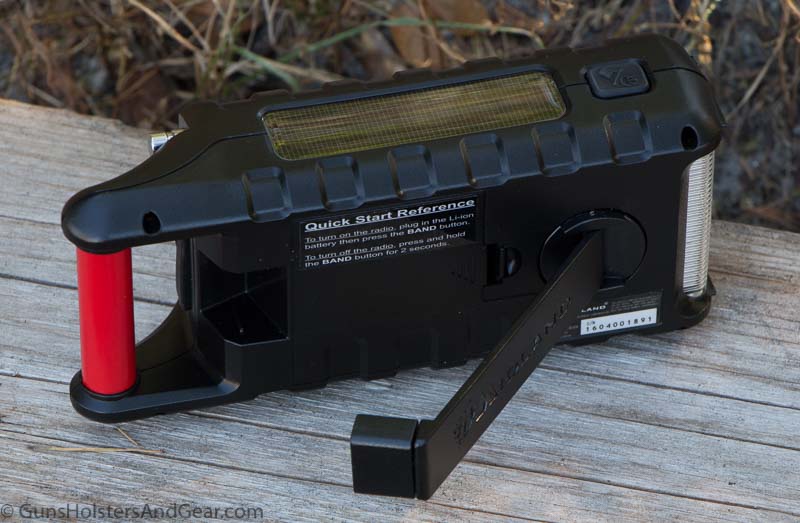 Cranking for a little longer will give you enough stored power to operate the flashlight. Fully charging the battery is doable, but will take a while.

Prior to the lights going out in your home, you can charge the internal battery with a USB cable. On the handle end of the radio is a weather resistant rubber flap that covers three ports and a switch. One of the ports is a micro-USB port that takes electricity in to charge the Li-ion battery. It takes about 5.5 hours to charge a completely drained battery through the USB port.

The final way to operate the system is through standard AA batteries. The radio takes six AA batteries to operate. If you look under that rubber flap that covers the charging port, you will see a switch right next to it. To operate the weather radio on AA batteries, move the switch to the “AA” setting. If you want to go back to the rechargeable battery, slide it to “Li”. 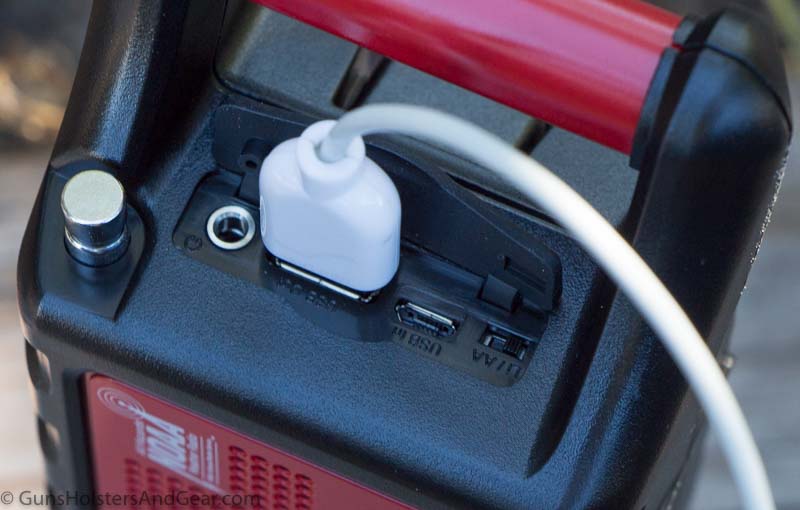 Since the ER310 has an inexhaustible supply of power, it makes for a great charging station for other devices, like your phone or flashlights. A standard sized USB output is located on the handle end of the radio. This output can be plugged into any USB capable device and automatically charged. 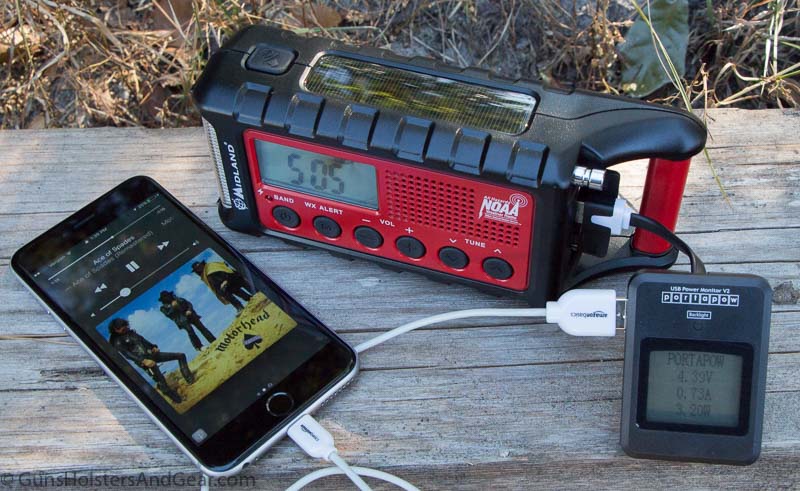 Using a simple power monitor, I determined that my iPhone 6s Plus pulled about 3.2 watts through the port. While this is not as powerful as other battery packs I have tested (like the Streamlight EPU-5200,) it is more than enough to charge most devices. High power devices like an iPad will likely take a long time to reach a full charge.

In a situation where there is a lack of power, the ER310 can use the solar array to keep other devices charged throughout the day while human power (cranking) will provide juice when the sun is down.

The flashlight has three modes: low, high and SOS. The low power mode is ample light for most tasks and navigation, while the high power mode seems to double the output. The beam is more of a spot than a flood. According to Midland, the total light output is 130 lumens. 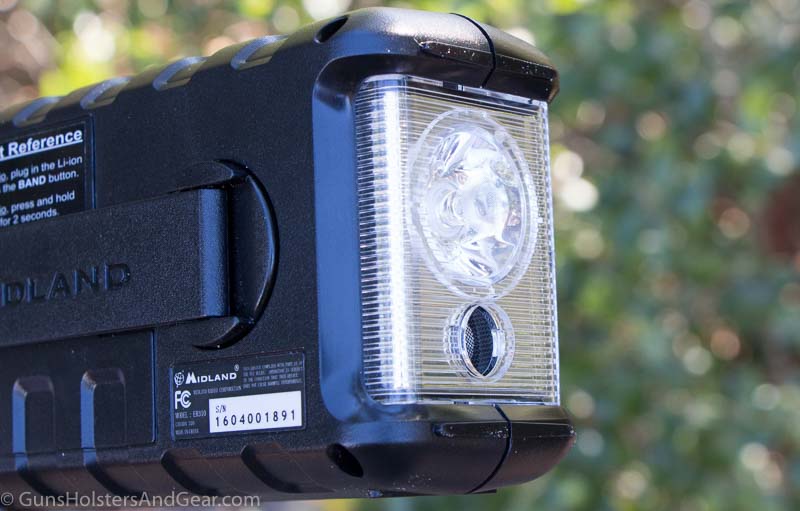 Do not expect the ER310 to replace a dedicated flashlight for tactical use, but it can provide light in the absence of a lantern or flashlight. Since the unit has the benefit of charging through winding or solar, the light can be a great benefit any time the lights are out for more than just a Â few hours.

The SOS function modulates the light output to blinks that spell out SOS in Morse code. Even for people who do not know Morse code, the blinking can certainly catch their attention. If you are in a bad way and are trying to get help, the flashing light may help bring in rescuers.

Built into the ER310 is an electronic dog whistle. When activated, it emits an ultrasonic sound that dogs can hear. In theory, this may help rescuers using dogs to locate you. I have not worked with S&R dogs, so I don’t know if this is something that would help or not.

A weather alert radio should be considered an essential piece of gear for everyone. While I mostly talk about firearms on this site, you are more likely to encounter a severe weather emergency than need to use your firearm in self-defense. From this perspective, I find the acquisition of a weather radio to be high on the list of priorities when it comes to protecting your family. 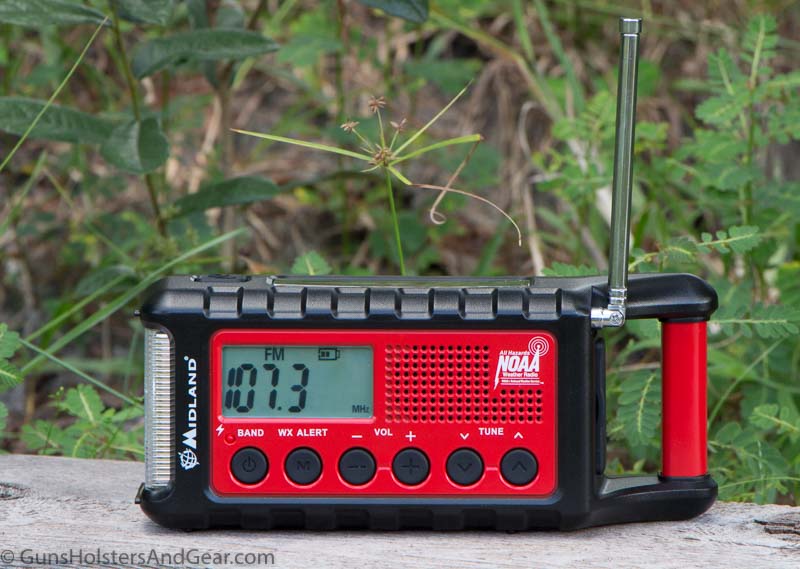 The ER310 is a great little radio. It had very good reception and the weather alert function worked correctly. With a built in rechargeable battery, it can run indefinitely on solar and winding power. If you kept it in a sunny window, you would probably never have to do anything more to it.

I really like the fact that the unit has the ability to charge other electronic devices. In a tight situation, being able to charge a cell phone or USB rechargeable flashlight can be a big help.

While the flashlight and dog whistle functions are potentially useful, my main interests in this unit are the radio and charging functionality.

Midland is a radio manufacturer that has been around for a long time. I’ve used the company’s radios in many different applications, and I have always found them to be very good – especially considering how reasonable the company’s prices are.

Bottom line: I recommend the Midland ER310 for anyone: both for the house and when traveling. You can click here to buy one on Amazon.

As with all of my reviews, I provide a complete disclosure of any biases that may impact my articles so you can properly judge my evaluation of the gear.

The Midland ER310 was provided to me byÂ the manufacturer for the specific purpose of testing and review. No monies or other consideration were offered, asked for or exchanged for this review. Midland is not an advertiser, nor are we in any talks for them to be one.

I do not have any financial interest in Midland or other outdoors or firearms manufacturers.

The Midland ER310 is a multi-purpose radio with weather alerts, AM/FM reception, a flashlight and the ability to charge other electronics devices such as your phone. It has an internal rechargeable battery and can be powered by AA batteries as well. The internal battery can be charged via included solar panel, crank (dynamo) or USB. The radio performed very well in my testing, and you can click here to buy it on Amazon.